Canadian company Hatch was retained by the City and Borough of Sitka in Alaska to perform design engineering services for the Blue Lake Expansion Project. Significant benefits in terms of energy production are apparent if the reservoir level can be increased by raising the dam height by 25m. Here D Curtis and F Feng present the results of the non-linear finite element stress analysis which was performed during the design of the dam raise. 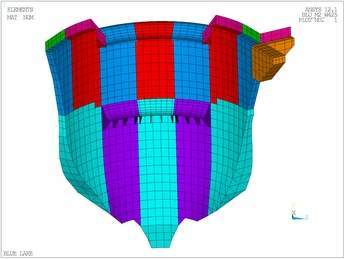 The existing Blue Lake dam is located near the City of Sitka, Alaska and is a single curvature concrete arch with a central overflow spillway at crest el 104m. The outer sections of the dam have a top level at el 105m with parapet walls to el 107m. The base of the dam at the crown cantilever is founded at el 58m, excluding the concrete plug which extends an additional 15m below.

Significant benefits in terms of energy production are apparent if the reservoir level can be increased to el 129m ie, a height increase of 25m. The new spillway crest will be set at el 129m with outer sections of the dam 0.9m higher. Parapet walls 3.35m high to el 134m will be provided to prevent overtopping of the dam during the probable maximum flood (PMF). For the new facility, the reservoir would surcharge to el 134m during the PMF and the corresponding peak outflow would be 784.3m3.

The dam must be designed to withstand the effects of a MCE earthquake with a PGA of 0.31g. The configuration of the abutment limited the options for the geometry of the raised portion of the dam. The left abutment geometry was such that the raised portion of the dam had to be a constant radius arch. This geometry limitation initiated concern for seismic loading because an arch dam in a high seismic zone would typically have cantilevers designed to lean downstream in the upper portion of the dam. The downstream lean induces compressive stresses on the downstream face under static loading. These compressive cantilever stresses would tend to offset tensile stresses caused during an earthquake when free cantilevers form at the top of dam as the dam deflects upstream. An engineered horizontal joint was designed to relieve these tensile stresses. The horizontal joint is formed between the existing and new concrete. This joint would open and close during an earthquake, thereby significantly reducing tensile stresses transferred to the existing concrete

• Non-linear surface contact elements are used to model the vertical contraction joints and the concrete rock interface. The analysis is highly non-linear because the contact elements are included at the dam/rock interface. These elements allow the joints to open, close and slide during the earthquake time history analysis. The vertical contraction joints are keyed and they do not transfer tension across the joint.

• Shell elements are used to model the parapet wall at the top of the raised dam.

• Figure 3 shows the finite element mesh for the dam only. The foundation rock was also included in the model but it is not shown. The different colours in Figure 3 show the concrete monoliths of the dam.

Concrete cores were taken from the existing dam in 2010 and compression tests were undertaken. From the testing, the compressive strength of the concrete was conservatively estimated to be 5000 psi. The static and dynamic tensile strength of concrete was determined from Raphael (1984) with a 60% reduction for lift joint strength.

The allowable factors of safety for computed compressive and tensile concrete stresses are given in Table 1.

As noted previously, the vertical contraction joints and the concrete/rock interface was modelled using surface contact elements. A friction angle of 45° was used for relative sliding vertical movement on the contraction joints. The shear keys in the contraction joints prevent relative radial movement between monoliths. The shear strength of the shear keys was also checked using forces obtained from the static and dynamic analyses. The friction angle at the concrete/rock interface was conservatively estimated to be 45° including an allowance for joint roughness, whille the cohesive strength at all joints in the model was assumed to be zero.

The results of the analyses are presented for three models as follows:

• Model 3 – Assumes horizontal interface between existing and new concrete is unbonded without a horizontal shear key.

It is noted that the existing crest spillway was left in the model. A sensitivity analysis showed the spillway tends to reduce the tensile stresses on the downstream face of the existing dam. The existing spillway is not shown in the presentation of results.

A static analysis using model 1 and the normal maximum reservoir level found that the cantilever stresses exceeded the allowable stresses on the downstream face at the joint between the existing and new concrete. For this reason, models 2 and 3 were developed.

Figures 4 shows the deformed shape of the dam (model 1) when the dam is in its maximum upstream relative displacement during the earthquake. The free cantilevers at the top of the dam are clearly seen in figure 4. Figure 5 shows a comparison of model 1 and 2 results for case 1 loading. The snapshot shows the computed cantilever stresses on the downstream face when the dam is in its maximum upstream excursion during the earthquake. The computed tensile stresses from model 1 are unacceptably high whereas model 2 tensile stresses are acceptable. It was generally found that the largest principal tensile stress was aligned in the cantilever direction; hence cantilever stresses are plotted herein. As expected, the arch stresses in the upper portion of the dam were larger in model 2 compared to model 1. The thrust block on the left abutment would accommodate this additional load.

The case 2 analysis assumes that the earthquake occurs with the normal minimum water level ie, headwater at el 113m. Figure 6 shows a comparison of model 1 and 2 cantilever stresses. Snapshots are taken with the dam at its maximum upstream relative displacement. From these figures, the model 2 results with the unbonded horizontal joint show significantly less tensile stresses. It is noted that the stress concentrations shown in figure 24 at the top of the dam are not real. During sensitivity analyses, it was found that the constraint equations which were used to attach the new spillway to the dam caused fictitious stresses to be computed in this area. The constraint equations were replaced with a glued surface contact element and the fictitious stresses disappeared and the overall results were not affected.

Some additional analysis was undertaken using model 3 which allowed relative radial shear movement between the new and existing concrete. Figure 7 shows a comparison of the computed cantilever stress on the upstream face at a snapshot corresponding to maximum downstream movement during the earthquake. From these figures, the computed tensile stresses are greatly reduced with model 3. Model 3 essentially forces the new concrete to take additional load in arch action without causing large increases in cantilever stresses in the existing dam.

The following conclusions are drawn:

• Three models were used in the analysis of the dam. These models made different assumptions regarding the behaviour of the horizontal joint between the existing and new concrete. It was found that a bonded joint (model 1) would allow the development of large cantilever tensile stresses in the dam during an earthquake. However, an unbonded horizontal joint (models 2 and 3) between the existing and new concrete adds flexibility to the dam and this would significantly reduce earthquake induced tensile stresses in the dam.

• The horizontal joint between the existing and new concrete was analysed with and without a shear key (models 2 and 3, respectively) and the stresses in the dam were found to be acceptable for both conditions.

• The model with the unbonded horizontal joint and a shear key (model 2) is preferred, although some provision for horizontal shear movement will be considered in the final design of the horizontal joint. The model 3 analysis (without a shear key at the unbonded joint between existing and new concrete) predicts the MCE would cause about 0.76cm downstream shear displacement at this joint. As a result, the tensile cantilever stresses in the existing concrete below this joint would be reduced compared to model 2 results.