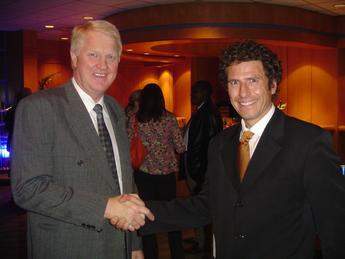 The first grid connected independent hydro power plant in South Africa is being developed by Bethlehem Hydro Limited. Located on the As river, which originates from the Lesotho Highlands Water Project (LHWP), the project comprises two separate generation sites – a 2.2MW run of river site and a 1.7MW location at the wall of the Saulspoort dam. Both greenfield sites are in close vicinity to the town of Bethlehem in the Free State province of South Africa

Income from the project, which will have an annual power production of 28.6GWh, will be generated by selling electricity and capacity under a long-term power purchase agreement (PPA) to the Dithlabeng local council and by selling its reduction in greenhouse gas emissions as Certified Emission Reductions (CERs).

The Bethlehem project has been designed to provide positive impacts on a national and local level. Its implementation will result in the procurement of goods and services to the value of US$3.8M in the local area and nationally, since all equipment and services (except for the turbine and generator units) will be sourced locally. It is anticipated that, of this amount, US$1.9M will be spent in the Free State province.

A further benefit will be the provision of jobs during the project implementation period. The job creation impact can be divided into the jobs generated during construction and then during the operational period. Estimates are that during the construction period, 40 skilled jobs and 100 to 160 unskilled job opportunities will be created.

The true potential impact of this development can be seen when considering that the average household size in this area is five people. This, by implication, means that 160 unskilled jobs could provide an income to almost 800 people or to 160 households. This impacts the household income levels and poverty profile in the area.

As the first project of its kind in South Africa, it provides a valuable opportunity for capacity-building amongst all stakeholders in the implementation of the country’s Energy white paper – concerned with renewable energy in policy, legislation and the aim of achieving energy security in electricity supply and environmental restoration through diversity of supply resources.

The project is, therefore, in direct alignment with the latest developments and policies in this sector in South Africa. The provision of infrastructure also falls within the DBSA (Development Bank of South Africa) mandate, as well as the Dihlabeng Local Municipality (DLM) development priorities.

Bethlehem Hydro has secured the full financing required for the project’s development and construction. Commitments for debt provision have been secured from the DBSA. The equity investors include NuPlanet, the Energy Development Corporation (formerly CEF) and a broad based Black Economic Empowerment (BEE) consortium.

Both sites can be characterised as low head – high flow. The provisional turbine choice was made on the basis of competitive offers received from interested hardware suppliers. Final turbine selection will be made during the detailed design phase of the project, and based on the flow and head specifications, the technology to be used will be Bulb Kaplan type turbines. It is expected that two generating units will be installed per site. Bethlehem Hydro will release an international tender in early 2006 for selection of turbine provider.

At the Saulspoort dam site, a penstock will be installed through a hole in the dam wall made specifically for this purpose. The As river installation will comprise an open canal leading to a penstock and a power house.

In both cases the turbines will be connected to the transmission network through a dedicated power line to a substation in the town of Bethlehem.

As mentioned earlier, the water resource in the As river is artificially fed from LHWP. The flow rate in the river is therefore not seasonally dependent and remains almost constant throughout the year and over time.

LHWP is a very large scale bulk water supply project that captures natural water flow in the highlands of Lesotho for consumption in the Gauteng province of South Africa. The outflow of LHWP into the As river is determined and specified under a long-term contract between the governments of South Africa and Lesotho. The average annual flow is specified in the contract at 24.6m3/sec, and the actual flow rate varies between 17 and 35m3/sec.

South Africa’s environmental legislation and its requirements for Environmental Impact Assessments (EIAs) are quite strict and rigorous. Many power sector projects in South Africa have suffered serious delays due to either a poorly planned EIA or an environmental or social barrier. The EIA is the only step in the project development process where there is legal requirement for broad public participation and comments on the project. It is therefore required as an input to almost all other licenses and permits required.

Bethlehem Hydro had its own share of EIA issues to deal with ranging from historical structures and rock art close to the sites to the impact on a small wetland that possibly provided nesting space to a red listed bird species (white winged fluff tail). The EIA had to cover not just the generation plant and construction activities but also access roads and power line routes.

Fortunately no serious negative impacts related to the project were identified. In addition, the project would negate some of the negative impacts that the increased flow in the river had had on the river banks and would actually contribute to erosion control and flow stabilisation. With the completion of an EIA scoping report and additional assessments by archeological and wetland specialists, the issue of EIA approval took nine months.

The project has suffered from a much extended lead time. This long lead time was due to the novelty of the project and the lack of experience in South Africa in dealing with new and independent power projects. Most delays experienced during development were related to licensing and permits. The generation licence took more that 18 months to be granted; the EIA approval took nine months and a water use license was only granted after three years. The generation licence, for example, was the first licence issued in South Africa to a new greenfield project and the water use licence was also the first to be granted for hydro power generation under the country’s new Water Act.

It is expected that new projects should see much reduced development time due to the awareness and institutional capacity that has been created around Bethlehem Hydro.

Following on the expertise developed with Bethlehem Hydro and the potential created by South Africa’s looming generation capacity shortage, NuPlanet has identified a number of new hydro power opportunities for further development. Despite the regulatory and red tape barriers in South Africa, the country does offer a stable and predictable environment for small and private generators and ready access to financing. NuPlanet is currently involved in the assessment of 10MW of small hydro potential in South Africa and is planning to enter the markets in Uganda and Mozambique.