In January 2008 the Korean nuclear industry is scheduled take a significant – albeit considerably postponed – step forward with the long awaited start of site excavation for Shin-Kori 3 and 4, the first APR1400 (Advanced Power Reactor) units. These are Generation III pressurised water reactors and the start of construction marks the culmination of a development effort that started in 1992. Certification of the design, in 2002, was followed by a delay in deployment. 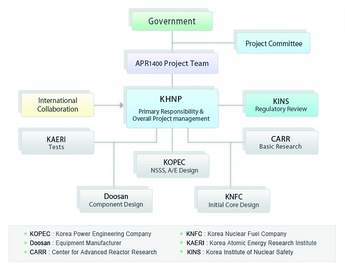 First permanent concrete for both Shin-Kori 3 and 4, which will be built as twin units with a shared building between them, is due to be poured in October 2008. Shin-Kori 3 is scheduled to load fuel in January 2013 and to go commercial at the end of September 2013. The corresponding dates for unit 4 are January 2014 and September 2014.

Organisation of the APR1400 development process

Under a separate contract, signed with KHNP in August of last year, Doosan is main component supplier, responsible for providing the nuclear steam supply systems, the GE-designed steam turbines (which will be the world’s largest 60 Hz machines), and their associated 1690 MVA (24 kV) generators.

Summary of improvements to NSSS, which increase thermal margin and system capacity

In fact the APR1400, with an installed capacity of 1455 MWe (4000 MWt), has its roots in a technology that is now part of the extensive Westinghouse portfolio bought by Toshiba from BNFL last year. It is an evolution of the 1000 MWe OPR1000 (Optimised Power Reactor) – formerly known as KSNP/KSNP+ (Korean Standard Nuclear Power Plant) – of which there are now six in operation in Korea, with four more under construction. The OPR1000 is based on Combustion Engineering’s System 80+ reactor technology, which was acquired by BNFL/ Westinghouse when it purchased ABB’s nuclear assets. Two System 80+ units (Yonggwang 3 and 4) have been operating in Korea for some years.

The APR1400, which has been developed under KHNP’s overall project management, working with major players in the Korean industry and elsewhere, promises substantial cost savings over the preceding designs, arising not only from economies of scale but also from design improvements and better construction methods. For example it will employ “over the top” installation of major components using a high capacity (1300t) crane capable of handling 775t at 210ft for steam generator installation (instead of insertion through a temporary opening in the containment). The target schedule for the Nth project is 48 months (first concrete to commercial operation).

The APR1400, a two loop PWR with four reactor coolant pumps, incorporates a number of significant improvements over the OPR1000 (as previously described in MPS, August 2001) and in the words of Jim Fici of Westinghouse, speaking at the contract signing ceremony, in embarking on this new generation of technology Korea is helping “the world transition to Generation III designs.”

A fluidic device is used in the APR1400 safety injection tank

Among the main improved design features in the APR1400 NSSS are the following:

• Direct vessel injection (DVI) for the safety injection system, as opposed to injection into the cold leg. This contributes to reduced probability of core damage. The vessel also has no weld seam in the beltline zone, while the vessel internals are designed to cope with higher seismic loads.

• Use of a 10% of tube plugging margin in the heat transfer area of the steam generators, rather than the 8% employed in the OPR1000. In addition, the steam generator upper tube bundle system is optimised to minimise tube thinning caused by flow induced vibration between the tubes and their supports. The heat transfer area of the Inconel 690 tubes is increased and the hot-leg temperature is reduced.

• Use of four pilot operated safety relief valves (POSRVs) on the pressuriser instead of a combination of three pressuriser safety valves (PSVs) plus two safety depressurisation system valves (SDSVs), as used in the OPR1000. This simplifies the system, reduces the possibility of leaks, eliminates chattering and facilitates maintenance. The volume of the pressuriser is also increased.

As well as these innovations on the nuclear side the APR1400 units at Shin-Kori will, as already mentioned, incorporate 60 Hz steam turbines of record size. Under an agreement with GE, Doosan Heavy Industries & Construction will manufacture and install two 1455 MW N2R steam turbines, which are of the two-stage, reheat, tandem compound type, with monoblock rotors. GE will design and provide key components for the machines (as it has for more than half of the Korean nuclear industry’s steam turbines to date).

The APR1400 turbines will feature a new 52in last stage bucket blade (compared with 43 in for the OPR1000) and a three-dimensionally modelled aero steam path.

Under the new contract, as well as designing the steam turbines, GE will provide Doosan with low pressure section buckets, a Mark VI turbine controls package, excitation components and a stator leakage monitoring system. The scope of the contract also includes technical services, spare parts, training and performance testing. The equipment will be shipped to Korea in January 2010.

Another innovative feature of Shin-Kori 3 and 4, aimed at minimising environmental impacts, is that the cooling water intakes and discharge system will be submerged (see diagram, below right).

Looking beyond Shin-Kori 3 and 4, there are also plans for another pair of APR1400 units, at Shin-Ulchin 1 and 2, with start of site excavation projected for June 2010. First concrete is scheduled for March 2011 and March 2012, respectively, with commercial operation slated for December 2015 and December 2016.