Another Mexican success for Doosan Skoda

Doosan Skoda Power has reported its fourth steam turbine contract in Mexico in less than a year. 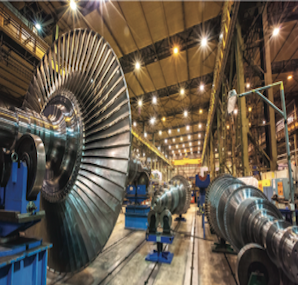 The latest is for a 300 MW class three-casing steam turbine to be installed in the Empalme II combined cycle power plant, which will employ Siemens H class gas turbine technology. The Empalme II plant, located in the state of Sonora, will be fuelled with natural gas and will have a total capacity of 770 MW upon completion by mid of 2018.

The EPC contractor, and Doosan Skoda Power’s client, is a consortium formed by Duro Felguera and Elecnor.

The plant is near the city of Guaymas and will be operated by CFE, Mexico‘s state-owned electric company. It is estimated that energy demand in the north of Mexico is growing at about 3.6%/y.

After the completion of the project, the total capacity of Doosan steam turbines installed in Mexico will reach nearly 1 GW, with six units in operation, the company says.

Meanwhile, at the smaller end of the unit size range, Doosan Skoda Power reports that it is to supply a turbine island including a 32 MW steam turbine, a gearbox and an air-cooled condenser, to the Eti Bakir Mazidagi phosphate plant in Turkey, with operation planned for the second half of 2017.

Doosan Skoda Power says the contract represents its first success in the field of industrial turbines in Turkey, where other Skoda steam turbines, with a total output of more than 2300 MW, are already installed, primarily in fossil power plants.

A feature of Skoda’s industrial turbine is the location of the gearbox on the main oil tank. This solution is cost-effective in terms of floor area needed, reduction in the height of the base and reduction of suction and delivery losses in the oil system, says Skoda.