The Cushman No 1 dam in Washington, US, was subjected to a detailed non-linear static and dynamic analysis, undertaken as part of FERC Part 12 investigations 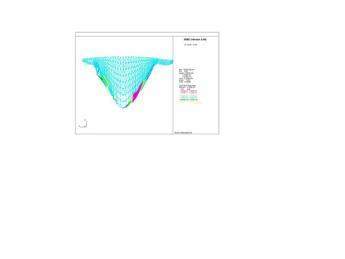 THE Cushman dams are located on the lower stretch of the North fork of Skokomish river, on the southeastern side of the Olympic peninsula near the southern end of Hood canal. The city of Tacoma, US, owns both dams.

Cushman dam 1 is a single curvature concrete arch dam with an overall height of 79m above the streambed. The 122m long crest of the dam is at el. 741.5. The reservoir’s normal maximum storage level is el. 738.0. The dam was completed and placed into operation in 1926.

The Cushman 1 dam/foundation contact is poorly shaped especially at the right abutment where it is sloped adversely in the downstream direction. This fact led to the question of the ability of the dam to withstand the strong ground motions associated with the seismic loading. It was recommended to perform a sophisticated non-linear numerical analysis to ascertain the seriousness of the seismic response and evaluation of remedial modifications.

The 3DEC (3-Dimensional Distinct Element Code) program is the three-dimensional extension of Itasca’s two-dimensional code UDEC. It is specifically designed for simulating either the quasi-static or dynamic response to loading of rock media containing multiple, intersecting joint structures.

The 3DEC model is an assemblage of discrete polyhedras
representing discontinuous medium. Discontinuities are treated as boundary conditions between blocks. Large displacement on the discontinuities such as slip and opening is simulated in a discontinuous medium. Relative motion along discontinuities is governed by linear and non-linear force-displacement relations for movement in both the normal and shear directions. The program uses an explicit solution scheme, which gives a stable solution to unstable physical processes.

The bedrock in the area of the Cushman projects consists of a thick sequence of basalt and andesite flows with local interflow layers of tuff and agglomerate, of the Eocene age Crescent Formation. At the dam site the Crescent Formation layering strikes about NE-SW, crossing the canyon at a high angle and dips 45 to 60º SE downstream. Various joints in the foundation rock are present.

Foundation rock, concrete dam, and reservoir water elements were discretised. An exploded view of foundation rock, concrete dam, and the reservoir is shown in Figure 2. In Figure 2, the reservoir is shown in the upper part of the figure, the dam in the middle and the reservoir in the lower part of the figure. The reservoir was extended more than three times the dam height in the upstream direction. It is noted that the bulk of the model was created using a 3D AutoCad model, which was supplied by Tacoma Power. In the foundation rock, four joint sets were used; in the concrete dam, the seven vertical contraction joints and the dam/foundation contact joints were modelled. Various rock joints forming a right abutment wedge are shown in Figure 1, and Figure 3 provides an illustration of right abutment wedge along with dam. Right abutment gravity sections and the start of the arch section of the dam are also shown to obtain spatial location and orientation of the wedge with respect to the dam.

Various FISH functions were written to simulate the effect of grouting of the independent cantilever monoliths at the contraction joints, the uplift pressure distribution at the dam-foundation contact and water pressure in the joints on the right abutment wedge surfaces. FISH functions provide a programming capability in 3DEC that allows the user to program such features as grouting joints, i.e., closing gaps at the dam joints.

Figure 4 presents various stages during the modelling sequence to establish the initial state of stress. Initial rock stresses were computed using gravity loading, then the dam monolithic blocks were constructed. Grouting of the independent cantilevers was simulated by specifying a closed gap between the contraction joints after gravity loads were equilibrated. The reservoir elements were turned on to load the dam hydrostatically. Parametric studies were performed to examine the sensitivity of the 3DEC to reduced frictional strength at the dam-foundation contact and on the joints forming the right abutment wedge. Finally, the dynamic analysis was performed using Juan de Fuca and Cascadia seismic records for MCE loading.

The joints between the dam-reservoir and reservoir-foundation are assumed to be elastic, and contraction joints within the dam and dam-foundation contact are assumed to have zero cohesion and 55º friction angle. The dam foundation was quite rough, therefore, the assumed friction angle is considered conservative. In the right abutment wedge analysis, the cohesion on the joint planes was set to zero. The assumed total combined (cohesive and frictional) shear strength on joints B, D, A1 and A2 is taken as 55º. It was assessed that the total shear strength of the joint planes is at least equivalent to that with a combined friction angle of 55 degrees. The bulk modulus of the elements in the reservoir region was set to 2.90 x 105 psi. The shear modulus was calculated using Poisson’s ratio of 0.495, i.e. a compressible fluid.

Damping parameters and discretisation – the hydrodynamic interaction between the dam and the reservoir is modelled using solid elements for the dam concrete and reservoir water. The highly uneven surface topography in the upstream region resulted in complex geometrical shape for reservoir region.

The dominant frequency range for the earthquake and dam response is between 0 and 5Hz. The mass-proportional component of Rayleigh damping is employed. The fraction of critical damping of 4.35% was obtained as operating at the centre frequency of 3.43Hz.

Two reservoir elevations corresponding to usual loading case (225m) and the PMF unusual loading case (227m) were considered. The loading due to reservoir impoundment was simulated by activating the reservoir elements, and a comparison of results was made using the reservoir modelled with solid element and merely applying the hydraulic loads as nodal forces. Similar response of the dam was observed when the reservoir was simulated by applied hydraulic loads on the upstream face of the dam. For the usual load condition with a joint friction angle of 55º, the maximum computed slip displacement at the right abutment contact was 0.06in (0.152cm). When the friction angle was reduced to 35º, the maximum computed joint shear displacement of 0.129in (0.328cm) is observed at the dam foundation contact as shown in Figure 5. The shear displacement is concentrated on the right side of the mid-cantilever, i.e., where the contact is adversely sloped downstream. Figure 5 does not show the dam elements but rather the geometry as input to 3DEC. The model contains over 200,000 elements.

The static numerical analyses carried out show that the right abutment wedge at the Cushman dam 1 is stable with friction angles reduced to 25º on the discontinuities within the rock mass. The global displacement vector pattern within the dam did not alter significantly until the friction angle was reduced to 25º. However, even for a friction angle of 25º, the maximum displacements after the reservoir impounding are less than 0.3in (0.76cm). within the dam and less within the foundation. Therefore, for both usual and unusual loading the factor of safety against the right abutment wedge failure is greater than 3 [i.e. tan (55)/tan (25) is greater than 3]. A similar conclusion on the wedge stability was reached using a manual stability analysis.

The dynamic loading of the dam represents the extreme loading condition for the dam stability assessment. Two controlling earthquakes ground motions for the Cushman dam sites are the Cascadia (inter-plate) and the Juan de Fuca (intra-plate). The analyses were performed with both the records. The results for the Juna de Fuca are discussed in this paper, although the Cascadia record gave similar results.

The peak accelerations in the horizontal plane are 0.49g. The peak acceleration in the vertical plane is 0.28g. In the analysis, the three components of the earthquake are applied simultaneously. A quiet period of five seconds was used to check that the relative movement to joints had stopped after the earthquake. The input acceleration record was integrated to obtain the velocities. The velocities were used as the primary seismic input for the 3DEC analysis.

The response of an arch dam to an earthquake loading is influenced to a great extent by seismic input characteristics and the physico-mechanical properties of the intact concrete, rock blocks, and the discontinuities within them. The static state is an initial condition for the dynamic analysis.

The relative displacements of the crown cantilever were found and snapshots of stresses on the dam at the critical times were studied to examine the stresses within the dam body and shearing at the dam-foundation contact. The state of stress was also examined at the time of maximum opening of the contraction joints within the dam. It was found that in these various snapshots of stress, the stresses remained within acceptable limits.

The non-linear analysis performed with 3DEC offers an interesting insight into various failure mechanisms that can develop as the blocks slide, slip and open during static and dynamic loading. The 3DEC results were used in the DISPLAY program to plot deformed shapes. Figure 8 shows the exaggerated deformed shapes of the dam. It should be noted that the displacements are greatly exaggerated; otherwise it would be difficult to see the movements. Figure 9 is a zoomed view of the dam blocks on the right side. Relative separation and rotation of the dam blocks can be easily seen in these figures. From these figures the relative movement of various dam blocks can be observed.

The maximum computed shear slip displacement was in the range of 0.7 (1.78cm) to 1.3in (3.3cm). A post-earthquake analysis was undertaken with the dam in its displaced configuration and the uplift was increased to full reservoir head on the upstream half of the contact. A sensitivity analysis of frictional strength showed the dam remains stable in its post-earthquake condition.

It is interesting to note that the dam was less sensitive to reduced frictional strength in its post-earthquake deformed condition compared to results from its pre-earthquake sensitivity analysis.

From the results, the following conclusions are drawn:

• The dam is acceptably stable for the static, dynamic seismic and post-earthquake loading conditions

• Under severe seismic loading, the dam will experience permanent movement on the dam contraction and dam/foundation joints. The computed movements are considered conservative because the dam shear keys are not modelled and the cohesive strength of the rough dam/foundation contact is ignored in the analysis. The magnitude of the movements is found to be acceptable.

• Modelling of movements on joints as shown herein, allows realistic assessment of dams in static, dynamic and post-earthquake conditions.