An assessment of China’s potential for large scale CCS

This first-ever comprehensive survey of the potential for large scale deployment of carbon dioxide capture and storage in the People’s Republic of China has found that the country has enough deep geologic CO2 storage capacity to meet likely demand for more than 100 years. 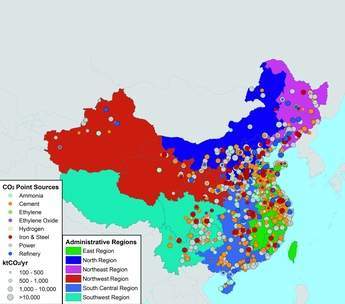 To date, much of the discussion about China’s options for addressing climate change has focused only on its large indigenous reserves and its heavy and increasing use of coal – creating a false impression that suggests China has only two choices – continued domestic use of coal with associated emissions rising unchecked, or foregoing the use of this large domestic energy resource in favour of cleaner, more expensive energy and the resulting economic impacts. In reality, CCS in China presents a third option – the continued use of cheap, domestic coal within China while supporting CO2 emissions reductions via the capture and geologic storage of the associated CO2. The survey* reported here found storage reservoirs located close to most of the large stationary CO2 point sources. This may significantly lower the cost of large scale greenhouse gas abatement for China relative to using other CO2 mitigation options alone, and adds weight to China’s position near the top of the list of nations that have both enormous fossil energy reserves and vast potential geologic CO2 storage resources, factors which could allow them to continue powering their economies with domestic energy supplies while still delivering deep and sustained reductions in atmospheric CO2 emissions (Figures 1, 2).

With the aim of facilitating a fundamentally deeper understanding of how CCS technologies could deploy in China, and at what costs, over the course of this century and beyond, a team of researchers led by Robert Dahowski of the US Department of Energy’s Pacific Northwest National Laboratory, and Professor Xiaochun Li of the Chinese Academy of Sciences’ Institute of Rock and Soil Mechanics, completed five years of collaborative research that defined the pivotal role that CCS technologies can play in cost effectively reducing China’s greenhouse gas emissions. The team evaluated the potential storage capacity in China’s major sedimentary basins, and mapped the large stationary power plants, steel mills, cement plants, chemical refineries and other industrial facilities that are responsible for 64% of all Chinese CO2 emissions to the atmosphere. The research team also compiled the first-of-its-kind CO2 storage cost curve for China.

The team documented 1623 large stationary CO2 emissions sources (Table 1) that collectively emit more than 3.8 billion metric tons of CO2 (GtCO2) per year. These facilities with those planned or under construction represent an enormous potential demand for CCS technologies.

Coal-fired power plants account for more than 70% of these annual emissions. Cement plants and steel mills make up the vast bulk of the remaining emissions, driven by China’s rapid economic and industrial development. For scale – China’s 3.8 GtCO2 in annual emissions from these 1623 existing facilities are equivalent to the cumulative emissions for the entire Chinese economy, including its transport sector, over the first half of the 20th century. If CCS could be cost effectively deployed at a significant number of these 1623 CO2 sources, as well as at new facilities, it could provide a significant contribution to stabilising atmospheric concentrations of CO2 and avoiding the worst effects of global climate change.

China may have as much as 2300 GtCO2 of onshore geologic CO2 storage capacity (2290 GtCO2 in DSFs, 21.1 in depleted coal seams, oil fields and gas fields) and maybe an additional 780 offshore.

More than 90% of the existing large power plants and industrial facilities are within 100 miles of a candidate geologic CO2 reservoir, and 85% within 50 miles, suggesting there will be little need to build an extensive long distance CO2 pipeline infrastructure. The large CO2 sources and candidate reservoirs are particularly well-matched in the North and Northeast regions where the team’s modelling reveals that virtually all point sources should be able to access adequate capacity in nearby candidate CO2 storage reservoirs through this century and beyond, even when taking into account the depletion of storage as reservoirs are filled.

Other regions may see more competition for large CO2 storage, but this survey indicates that the significance of this competition varies considerably from region to region. In the heavily industrialised East and South Central regions, competition is likely to be greater, with a larger fraction of the region’s CO2 sources unable to access a nearby storage reservoir. There are nearly 200 sources within these two regions that either do not have any known onshore geologic storage options available within the applied 150 mile search distance, or are unable to utilise the nearby storage resource because they have been outcompeted by other sources. However, if the offshore CO2 storage capacity in this part of China should prove technically and economically achievable, it would likely provide significant value for the CO2 sources in these regions.

Of the other regions, the Southwest is likely to experience more competition for storage space, as 24% of the sources there are unable to access sufficient nearby capacity. The northwest region appears to have ample CO2 storage capacity, yet a number of sources compete for available storage capacity in the eastern part of the region and longer pipelines may be needed to reach more distant storage options to the west. Such insights may enable Chinese decision makers to consider planning where new power plants and industrial facilities might be located to better utilise available reservoirs.

The ultimate role of CCS technologies will be determined by a combination of the stringency and timing of future GHG emissions reduction policies, the full costs of employing end-to-end CCS systems, and how those costs compare to other methods of bringing about large scale decarbonisation of the economy. The cost curve of Figure 4 provides data for such a comparison. It shows the costs of transporting CO2 from each point source to its matched CO2 storage reservoir and injection of the CO2 into a suitable deep geologic reservoir, including site characterisation and long-term measurement, monitoring and verification of the stored CO2. This analysis intentionally omits the cost of CO2 capture, compression, and dehydration in order to focus on the storage side of CCS but the authors of the report have indicated that future analyses will incorporate these significant additional cost components.

Largely due to the vast size of China’s candidate deep geologic CO2 storage reservoirs and their wide geographic distribution, the costs (of transportation, storing and monitoring) for the majority of the point sources falls in the range of $2-8/ton CO2. While there are some CCS projects (depicted as individual points on the curve) that might see their costs offset by revenues from enhanced hydrocarbon recovery resulting from CO2 storage in depleted oil fields and coal seams, the opportunity to exploit these ‘value-added’ reservoirs is limited by technical factors such as field readiness for CO2-driven enhanced recovery, remaining uncertainties for CO2 storage in coals, and the relatively small total storage capacity available in each field. There are also some facilities that could see transport and storage costs that are many times larger than those in the $2-8/ton CO2 range but in general, these represent relatively small CO2 point sources that are quite distant from their nearest candidate CO2 storage reservoirs. For these sources, it is likely that there could be more cost effective ways for reducing or offsetting their CO2 emissions.

Remarkably, this narrow range of potential CO2 transport and storage costs appears to hold true for the majority of China’s power plants and industrial facilities across a number of different scenarios explored in the analysis. For example, storage is likely to be available in this cost range for all regions of the country for at least a few decades of large scale CO2 storage, and indeed throughout much of this century for all but the South West. In that region, limited storage capacity could lead to higher per-ton transport and storage costs as time passes. Ultimately, this could allow non-CCS based emissions mitigation technologies to play a larger role in this region.

Though in-depth field and laboratory studies will be needed to validate current capacity estimates, this cost range holds true even if there proves to be only half as much usable storage capacity as projected. The research team analysed cases (Figure 5) in which only 50%, 10% and 1% respectively of the identified 2300 GtCO2 of onshore storage capacity were available for use. Only in the most pessimistic and unlikely scenarios, in which the total is overestimated by a factor of 10 or 100, do significant constraints develop on the cost effective long term deployment of CCS. Still, in all but the most pessimistic case, in which only 1% of the capacity proves suitable, CCS could be able to supply between 0.5 and 3.0 GtCO2 in annual emissions reductions for decades to come. For all but this very lowest capacity case examined, CCS appears able to provide a significant tool for addressing China’s CO2 emissions while at the same time preserving the energy and economic security provided by China’s large, domestic industry and fossil fuel resources.