An 8.3 MW giant awakens in the North Sea

By 2018 there is likely to be a new holder of the title ‘heavyweight champion of the turbine world’ in commercial operation. Vattenfall is about to start the construction of the Horns Rev 3 wind farm off the west coast of Denmark from a total investment of a little over €1 billion. If all goes to plan it will be commissioned in 2018. 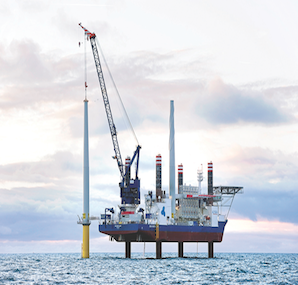 In 2013 the Danish government sent out tenders for a new 400 MW wind farm at the existing Horns Rev 1 and 2 site, and a 600 MW array at Kriegers Flak in the Baltic Sea. The Horns Rev tender was won by Vattenfall which subsequently ordered 50 of the largest WTGs available, V164-8.0 machines with a rotor diameter of 164m and rated at 8 MW, from the technical collaboration partnership of MHI-Vestas. The order has since been modified to 49 machines, and the current V164-8.0 can be uprated to 8.3 MW.

The project, which is located in the North Sea 30 km off the west coast of Denmark, has come to the end of the pre-construction development and tendering stage. Vattenfall has tendered for a monopile construction and signed an installation contract with A2SEA, which installed the structures for Horns Reef 1 and 2 in 2002 and 2009. All this means plenty of work for A2SEA’s purpose-built offshore installation vessels Sea Installer, which will be deployed to install the 49 MHI-Vestas turbines from the load out port Esbjerg, and Sea Challenger.

Later this year A2SEA will be employing Sea Installer at Burbo Bank where its has been contracted by owner Dong to install the 256 MW Burbo Bank Extension. This consists of 32 MHI-Vestas 8MW turbines. The project will start during September. The load out port will be Belfast.

In June EDF Energy Renewables placed an order for five MHI-Vestas V164-8.0 MW turbines for the Blyth Offshore wind Demonstrator Project in the UK. Rated at 8.3 MW, the five turbines will produce 41.5 MW from their site 5.7 km off the coast of Blyth, north of Newcastle. The project is a 50-50 joint venture between EDF Energies Nouvelles and EDF Energy and will be operated by EDF Energy Renewables.

It will, says its owners, test several ground-breaking technologies including a 66 kV electrical infrastructure, and gravity base foundations. The V164-8.0 MW turbines – originally rated at 8 MW – have been optimised for the project, utilising a power mode that enables the delivery of a maximum output of 8.3 MW.

The order includes a 15-year full scope service contract with an availability guarantee, aimed at optimising the performance of the wind power plant for a maximum power output.

The project will be the first to feature the 66 kV electrical infrastructure. The turbines include new transformers and switchgear to enable connection to the 66 kV grid. Use of the a system at this voltage allows approximately double the number of wind turbines to be connected on one equivalent array cable string compared to the existing 33 kV system, resulting in a reduction of the electrical infrastructure per megawatt installed and thus a significant cost saving for producing offshore wind power.

The project will utilise gravity base foundations – the first time this specific type of foundation will be used for an offshore wind power plant. It is a hybrid design, combining the widely used steel reinforced concrete foundation with a steel monopile, allowing the foundation to be installed in deeper waters (45 m) while eliminating noise from pile hammering
during installation.