All change on the Yangtze river 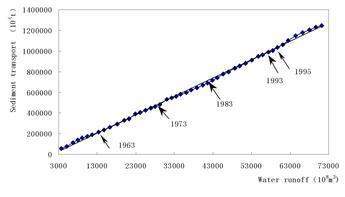 Silt sedimentation is an important phenomenon, which has a significant impact on the lifespan of reservoirs. A number of research projects have been conducted concerning reservoir sedimentation and downstream scouring during planning, designing and construction of the Three Gorges project to address sediment-related issues.

The river stretch from the headwaters to Yichang City is known as the Upper Reaches of the Yangtze river, with a catchment area of 1Mkm2, or 55% of the Yangtze river’s total. Along this river stretch, important tributaries such as Minjiang, Tuojiang, Jianling, Hengjiang, Chishui and Wujiang rivers and others flow into the main stem. The Yichang hydrometric station is located at a distance of 40km downstream of the Three Gorges hydro project and water flow and silt concentration variations measured by this station are representative for the Three Gorges reservoir, with silt load coming mainly from the Jinsha, Jialing, Minjiang, Tuojiang and Wujiang rivers and mainstream sections located in between. In the past, studies of original data of water flow and silt load were obtained from hydrological measurements before the 1980s. However, recent studies of the water flow and silt load upstream of the Three Gorges reservoir demonstrate significant changes compared with the past, with comparatively small changes of water flow and quite obvious reductions of silt load. Changes of sediment transport from the upstream stretch of the Yangtze river will have a large impact on the operation of Three Gorges reservoir.

Caused by both natural and human factors, some specific changes have taken place in water flow and sediment transport on the Upper Reaches of the Yangtze, and the Jialing river has witnessed a significant silt load reduction. Specific features and variation trend of water flow and sediment transport of the upper Yangtze river are studied and analysed here, using measured data from key hydrometric stations located on upstream river sections. Holding sediments assesses the roles of upstream reservoirs in silt load reduction. There are some other causes leading to silt load reduction, including water and soil conservation programmes and human activities, and these causes require additional studies in the future.

Figure 1 shows the dual accumulation curve for Pinshan station on the Jinsha river. It can be seen that from 1990 to 2002 some years witnessed large water runoff and large sediment transport, and after 2000 there is a trend for the curve’s gradient to decrease, but this silt load reduction trend is not obvious.

Figure 2 shows the dual accumulation curve for Gaochang station on the Minjiang river. Since 1993 the curve has the smallest gradient, demonstrating the silt load reduction trend for the river. In the recent period, the annual water runoff of Minjiang river does not vary significantly while its annual sediment transport reduces by about 20.7% compared with the mean annual value.

The Upper Yangtze and its tributaries do not show large variations of annual runoff in recent years, yet all tributaries demonstrate an obvious reduction of annual sediment transport, which causes a reduction trend of annual sediment transport in the Yangtze river at Yichang hydrometric station as Figure 5 shows. Since 1988, the annual average sediment transport at Yichang station is about 50.5% less than the mean annual value of the Yangtze river measured here. This fact means that the silt amount brought into the Three Gorges reservoir after it’s impounding will decrease significantly.

Where N represents the series length, or the number of measurement years. It is obvious when the rank order Mi is close to Ti, the rank order correlation relationship r has a large value to demonstrate the evident trend. From a=0.05 the critical value c=u0.975/vN-1 is obtained, where u0.975=1.96. Different variation scenarios Mi in relation with valuation r are defined as follows:

lrl>c means that the variation trend is apparent.

0.8c=lrl=1.0c means that the variation trend is apparent.

0.6c<lrl<0.8c means that the variation trend is not so apparent.

lrl=0.6c means that the variation trend is not apparent.

Based on the dependence relation statistical study of measured annual water runoff and annual sediment transport at the main hydrometric stations upstream of Yichang in the period from 1990 to 2002, the following dependence relations are obtained between the annual runoff and annual sediment transport for different hydrometric stations on the Upper Yangtze and its tributaries:

The above dependence relations are judged to be rational after symbol verifications and departure value verification.

According to the study results obtained from the sediment and silt research completed for the Three Gorges project during the 9th five-year plan period, there were 11,931 large to small-sized reservoirs constructed before the end of the 1980s on the Yangtze river and its tributaries upstream of Yichang, with a total storage volume of 20,504Mm3. The number of reservoirs completed in the decades before 1990 and their cumulative storage are given in Table 3, while silting-up status in the late 1980s is shown in Table 4.

Silt-holding of operating reservoirs has a dual impact on the downstream sediment transport. On one hand, it reduces the silt volume released to downstream river sections. On the other hand however, clear water released by the reservoir has a large capacity to carry silts and some silt concentration can be re-established through flow scouring. Taking this dual impact into consideration, some efforts are made to assess the sedimentation impact coefficient due to the silt-holding process by reservoir aggregation in a given catchment area. In this assessment, a large key silt-holding reservoir is taken as the start point, data from reservoir sedimentation measurements and sediment transport data of downstream hydrometric stations are first included in the analysis, then the silt-holding function of all downstream reservoirs along the river course is considered. Finally the river flow’s silt recarrying due to river bed scouring is incorporated to calculate the resultant silt reduction at the selected terminal hydrometric station. In such a way the silt-holding sediment reduction by an aggregation of reservoirs in the catchment area can be evaluated.

The sedimentation impact coefficient a due to silt-holding by an aggregation of reservoirs can be calculated with the formula,

where WRR is sedimentation volume as a result of silt-holding by an aggregation of reservoirs; WSE is the river flow’s silt recarrying due to river bed scouring.

The sedimentation volume caused by cascaded reservoirs’ silt holding can be calculated with the following formula,

The sedimentation volume caused by single reservoir silt-holding can be calculated with the following formula,

Variation of the sedimentation impact coefficient due to silt-holding by an aggregation of reservoirs in relation with distances along the river course can be expressed as follows,

Where L is the distance along river course; C and f are a parameter and a function respectively which are defined by many factors and can be calculated with measurement data.

For Jialing river and the Upper Yangtze, the modulated sedimentation impact coefficients is,

For other tributaries the above coefficient is,

Based on hydrological and sediment measurement data made available by the main control hydrometric stations on the Upper Yangtze and its tributaries, a preliminary study and analysis was carried out by the author to discover features, trend and causes of recent flow and sediment variations on the river. The main conclusions of this study are:

• Silt holding by hydro projects on the upper reaches of the Yangtze river is one of the causes leading to sediment reduction. Other causes include variations of rain-fall regime, water and soil conservation programmes, human activities, river bed sediment flashing, river bed sand dredging and others which require study in the future.