Aggreko, home from the sea 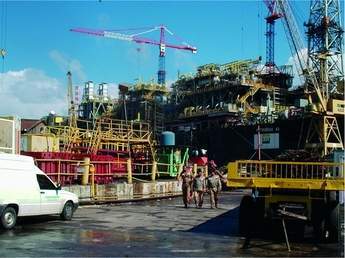 Genset specialist Aggreko has recently completed a contract with Halliburton’s Kellogg Brown & Root Inc (KBR) for the supply of two 5 MW / 13.8 kV temporary power packages and two 6 MVA loadbank packages during the construction, installation and start up of the Barracuda and Caratinga FPSO (floating production storage and offloading) vessels in Brazil.

The Barracuda FPSO, originally the Stena Continent, was converted in Singapore and completed at the Maua Jurong yard near Rio de Janeiro. The Caratinga FPSO, previously the Stena Concordia, was converted at the BrasFels yard in Angra dos Reis in Rio. Both vessels were delivered to the Barracuda and Caratinga oilfields located in the Campos Basin where they are expected to increase Brasil’s crude output by 20% with a combined production of 300 000 barrels per day. The two oilfields are being developed through an EPC contract between KBR Inc at Barracuda and Caratinga Leasing Company for the state-owned oil company Petrobras.

To prevent electrical difficulties once the vessels were installed offshore, the 6 MVA loadbank packages were used to test the main gas turbines as well as all electrical equipment on board the FPSO’s during the time they were in port.

Aggreko was awarded the contract on the basis of “the detail and quality of its technical submission”, combined with the extensive experience that the company has dealing with similar projects worldwide.