The world’s largest offshore wind farm is now fully operational, but the London Array’s developers are already looking ahead to newer, bigger projects. Jim Banks speaks to DONG Energy’s Benj Sykes about how the construction team overcame the challenges of building such a significant installation and the important lessons they have taken away from the build. 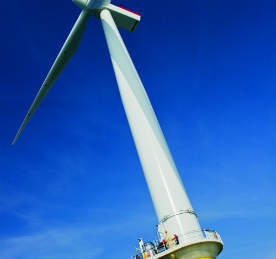 n 2001, environmental studies confirmed that the outer Thames Estuary would be a suitable site for a wind farm. The intervening years have seen a complex process of planning, investment and construction, which has resulted in the first phase of the London Array – the world’s largest offshore wind farm – come online this year. Every one of its 175 turbines is now turning and pumping electricity into the UK’s power grid.

The 630MW project is the culmination of two years of offshore construction work, beginning with the installation of the first foundation in March 2011. Completed on time, the construction of the London Array has been in the spotlight ever since it began, primarily because it represents the next stage in the rapid development of bigger, more efficient and more cost-effective wind power facilities. It also plays an important part in the industry’s efforts to bring down the cost of offshore wind farms.

"All the turbines have been commissioned and we are putting electricity into the grid," says Benj Sykes, country manager for DONG Energy’s UK Wind Power business, one of the three partner companies working on the project. "Like any building project, however, there are still some loose ends to tie up. There are some snagging issues to look at now, but the project has been handed over to the operations and maintenance team.

"This is an important step towards meeting the challenge of lowering wind energy costs. Our goal is to reach €100/MWh for future projects, which would represent a cost reduction of 30-40%. It is also a step closer to our technology goals. We have 3.6MW turbines in the London Array, but the next project will have 6MW turbines, two of which are already being demonstrated at the Gunfleet Sands wind farm in the North Thames Estuary," he adds.

Located 20 miles from the Kent and Essex coasts, the London Array site covers an area of around 245km2 and sits in waters up to 25m deep. The turbines are positioned in rows and columns, which are aligned according to the prevailing south-westerly wind, and sit 650-1,200m apart, connected to offshore substations via array cables buried in the seabed.

The construction of such a large and complex facility drew on the experience and resources of three partners – Denmark’s DONG Energy, power and gas giant E.ON Group, and Abu Dhabi-based Masdar.

Construction work for the London Array began onshore well before the installation of the first offshore turbine. In 2009, work commenced on an onshore substation at Cleve Hill in Kent. In total, the project required the construction of 175 turbines and foundations, one onshore and two offshore substations, as well as the installation of 450km of cabling.

"You want a windy place to put the turbines, but a lot of wind made it a very volatile environment for the construction team."

The offshore construction phase required meticulous planning in order that its many elements were pushed forward simultaneously and completed on time (see figure, page 49). No amount of preparation, however, can account for the unpredictable environment of a building site 20km out to sea. Not only does such a site lack the infrastructure associated with onshore sites, but high winds and unpredictable sea conditions also make it a difficult place to handle complicated lifting and construction processes that involve large and expensive components.

"We are talking about big bits of kit – the foundations can weigh up to 650t, so there are some very heavy and complicated lifts," explains Sykes. "The project had a lengthy construction process with 175 turbines and foundations, plus the cabling and the substations both onshore and offshore. There is a saying that no battle plan survives engagement with the enemy and we certainly had some big challenges, particularly from the weather.

"You want a windy place to put the turbines, but a lot of wind – particularly in the last few months – made it a very volatile environment for the construction team. The currents in the Thames Estuary are also very challenging, but we were aware of that from the project at Gunfleet Sands," he adds.

Managing the offshore construction phase relied on extensive planning and efficient resourcing of the construction base in Ramsgate, Kent. The base, which was built during 2010 and housed 85 staff, served as the central hub for all offshore activities. These included building the foundations that would secure the wind turbines to the seabed; installing the turbines; setting up the substations to boost voltage before power reaches shore; and laying array cables to connect the turbine arrays and export cables to transmit the power.

A crucial ingredient was access to the most up-to-date equipment, including specialised vessels for cabling and construction. During installation of the monopole foundations – long, cylindrical tubes that are driven into the seabed – large cranes were required to mount the top section of the pile, which features ladders and maintenance platforms. To fix the 177 piles – 175 for the turbines and two for the offshore substations – the construction team used a custom-built vessel, the MPI Adventure, for working in deep water and another, SEA WORKER, for shallower areas. Both vessels have four extendable legs that lift the deck out of the water, creating a stable platform upon which to hammer the piles into the seabed.

The vessels for laying the 200km of array cables between the turbines and the 220km of export cables connecting the substations were also of the highest specification. As well as the surface vessels, high-tech remotely operated vehicles (ROVs) were also essential for the subsea operations. The newly built specialist cable installation barge and plough, Stemat Spirit, launched in 2010, was essential for constructing the trenches and installing the four export cables – each of which has a continuous length of over 50km – along with the fibre-optics lines, which enable remote communication with the turbines and control their operation from the shore.

Another challenging aspect of the construction phase was the connection of the export cables to the onshore substation at Cleve Hill, which was achieved using horizontal directional drilling (HDD) conduits. With this and many other processes, the equipment and techniques used were the most sophisticated available, and yet they represent merely a step on a sharp learning curve. The London Array’s construction phase has not only yielded an impressive result, but has also raised the bar for future projects.

The end result of the demanding construction process is a fully operational wind farm with a capacity of 630MW – enough to power almost half a million homes – that achieves annual savings of over 925,000t of CO2. Perhaps the more notable outcome of the London Array, however, is that it has pushed the boundaries of what can be achieved.

"We were glad to get to the end of the construction phase, which was a monumental achievement for project director Richard Rigg and his team," says Sykes. "We learnt a lot about optimising operations, as well as the importance of having very effective marine coordination so that we could have multiple activities going on alongside one other. The marine planning phase is very complex.

"We and our partners will take a lot away from this for use in future projects, particularly in terms of planning parallel activities and dealing with challenging seabed currents," he declares.

While it may be the world’s largest offshore wind farm at present, the ambitions of its backers mean that the London Array will be overtaken in a few short years, in part thanks to the experience gained by the construction team during its installation.

"We are looking at bigger turbines for future projects – we could have up to 10MW turbines by the end of the decade," predicts Sykes. "The turbine blades in the London Array are 120m in size, but by the end of the decade we could see 200m blades. There are also novel ideas for the foundations; on the London Array we used monopiles, but we will be seeing more use of jackets, especially in deeper water.

"The technology for cables and subsea stations is also evolving, and soon there will be the next generation of vessels, which will be suitable for a wider range of environments. We have learned from each project through the highly collaborative partnership process. This is a big and important project that involved complex marine logistics, and is a definite step towards the 1GW projects that we will see far from shores in the future."