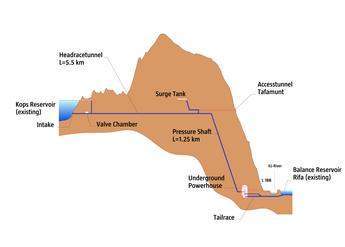 In west Austria, Vorarlberger Illwerke AG is currently building the Kops II, a new 450MW pumped storage power plant, in the catchment area of the Ill river. The upper reservoir is the existing reservoir Kops with a top storage water level of 1811m and the tail water reservoir is the existing balancing reservoir Rifa with a top storage water level of 1007m. All parts of the power plant are situated underground. The construction work started in September 2004 and no additional water resources will be used (see figure 1).

Kops II is designed to optimally meet the current demands of the European electricity supply market. Therefore each of the three hydroelectric sets of Kops II is equipped with a motor-generator, a Pelton turbine, a torque converter and a storage pump. The Pelton turbine permits an optimal control ranging between zero load and full load without any major efficiency losses. The operation, based on ‘hydraulic short-circuit’, permits continuous power control also in the pump mode within a range of 0 to 100% load.

• Intake structure in the reservoir Kops.

• Valve chamber with two butterfly valves and a bypass shaft for pump mode.

• Two-chamber surge tank with an inclined shaft and three throttles.

• Underground power house: in a cavern (60.5m high, 30.5m wide and 88m long), with three hydroelectric sets consisting each of a turbine, a motor-generator, a torque converter and a storage pump.

• Combined outlet and inlet structure in the balancing reservoir Rifa.

The full range of control ability of +/- 100% without any significant efficiency losses requires the installation of a Pelton turbine. Generally the location of a Pelton turbine has to be designed considering adequate free height above the highest tailrace level, however, especially with a low downstream level in the tailwater reservoir, this means a loss of head.

A major need for the operation in the ‘hydraulic short-circuit’ mode is that the water flowing from beneath the turbine via the pump, and then back again to the turbine, must be exempt of air bubbles in order to avoid major losses of efficiency of the turbine.

The requirements for minimising head losses on the one hand and sufficient degassing of air bubbles on the other hand resulted in the concept of a compressed air surge tank in the form of three surge chambers situated immediately after the turbines. The concept is based upon three parallel cavities in the rock with a cross section of 70m2 and a length of 45m, each lined in a way to avoid losses of water in the near area of the cavern as well as losses of air. Furthermore, the realisation of a small two-chamber surge tank is necessary in the tailrace system in order to control the dynamic behaviour in the tailwater.

Air losses in a compressed air surge tank are due to:

• Incomplete degassing of the air bubbles from the water downstream of the Pelton turbines.

• Dissolved air in the water due to a higher pressure than the atmospheric pressure in the surge tanks.

• Possible leakages in the lining of the compressed air surge tanks.

In order to learn as much as possible about the circumstances given in such compressed air surge tanks, different scale model tests have been carried out, and research has been undertaken at the Technical University Graz, Department of Hydraulic Structures; the Swiss Federal Institutes of Technology Zurich and Technical University Munich, Research Institute Obernach.

Furthermore, field tests have been carried out in three existing power stations in Austria, in order to study the degassing of air bubbles under atmospheric pressure from the Pelton turbines.

The degassing of the air bubbles (out of the water) beneath the Pelton turbine can be assured by surge tanks of a sufficient length. The avoidance of air leakages in the surge tanks can be assured by an adequate lining, such as steel. Air leakage caused by the gas solubility of the water due to a higher than atmospheric pressure cannot be avoided. Such losses can only be minimised if the pressure in the air surge tanks is kept as low as possible.

Therefore it was decided to locate the air chambers as high as possible, which could be realised only by situating the Pelton turbines (with their turbine housings) above the generators. The concept of the underground power house considering these prerequisites is shown in figure 3.

In order to reduce to a necessary minimum the construction costs and period, and to enable construction works during winter time at an altitude of 1800m, it was decided to line the 5.5km long pressure tunnel with precast segments. With such a solution the production of larger quantities of in-situ concrete during winter will be avoided. A necessary presumption for such a design is that the external water pressure in the rock (rock water table) is higher than the internal pressure in the headrace tunnel.

The tailrace tunnel will be headed underground as an inverted siphon. This inverted siphon will have to undercut in river alluvions a street, the river Ill and an embankment of the Rifa balancing reservoir. To this purpose a special construction method will be necessary in order to avoid ground settlements.

Implementation of the project

Following an interim decision in favour of the construction taken in March 2003, the pre-testing procedure for the environmental risk assessment was introduced in April 2003. In September 2003 the implementation of the environmental risk assessment was applied for; the hearing took place at the end of March 2004. The approval became legally valid at the end of August 2004.

In parallel with the environmental risk assessment, the essential parts of the power station – all civil works, the turbines, the
generating sets, the torque converter and the pumps as well as the valves and transformers – were put out to tender. Contracts for all these parts were awarded at the end of August 2004. The
construction works started in September 2004. The first hydroelectric set is expected to supply electricity to the grid at the end of 2007 and the last of the three hydroelectric sets is due to start operation during the first half of 2008. The total construction costs of the project until completion will amount to US$435M, taking into account contingencies and escalation.