A powerful 50 years at Niagara

The New York Power Authority recently celebrated 50 years of power production at the Niagara power project. Here, IWP&DC takes a look at the history and development of the largest hydroelectric facility in New York State, and discovers why it is considered an outstanding engineering achievement 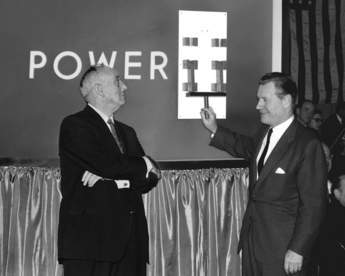 ‘An outstanding engineering achievement and a happy example of teamwork and cooperation between private and public enterprises’ – these were the words used to describe the Niagara Power Project by John F. Kennedy, US President during the launch of first power at the largest hydroelectric facility in New York State on 10 February 1961. Fifty years on, Kennedy’s words still ring true, with the project still lauded as a landmark feat of engineering.

The Niagara project’s history dates from 1956, when a rockslide destroyed Niagara Mohawk’s Schoellkopf hydropower plant. With tens of thousands of jobs in danger, President Dwight D. Eisenhower signed the Niagara Redevelopment Act the next year, directing the Federal Power Commission to clear the way for NYPA to redevelop the Niagara River’s hydropower potential.

Construction started in 1958, and an army of close to 12,000 workers labored around the clock to realize first power production by early 1961. A half-century later, NYPA is holding a year-long celebration of the Niagara project’s contributions to regional and statewide economic growth.

In 1961, the Niagara project emerged as the largest power producer in the Western World, and today – with a net dependable capability of 2.4MkW, enough to power nearly two million households – it remains New York’s largest electricity generator, and the third largest hydropower facility in the US, behind the Grand Coulee and Chief Joseph dams, both in Washington state.

The project includes two water intakes on the Niagara River 2.5 miles upstream from the Falls, and two underground conduits, each 46ft by 66ft, which carry water four miles under the City of Niagara Falls and the Towns of Niagara and Lewiston to a forebay connecting the Robert Moses and Lewiston plants.

Construction of the project began on 18 March 1958 under the leadership of New York’s “master builder,” Robert Moses. Thanks to the major team of workers engaged on the project, work was bought to completion slightly ahead of the deadline, with first power achieved on 28 January 1961. The project was then declared in full operation on 11 October 1962.

In 2006, NYPA completed a 15-year upgrade of the Robert Moses Niagara Power Plant and in 2010 announced plans for a US$460M Life Extension and Modernisation programme for the Lewiston plant.

The $298M upgrade of Robert Moses, which included replacement of turbines and retrofitting of other components, increased the plant’s firm and peaking capacity by 41MW.

The eight-year overhaul of Lewiston will begin in late 2012 under a schedule providing for the overhaul of a turbine generator unit every eight to nine months, with the final unit completed in 2020. The phase-in schedule provides for 11 of the 12 units to be available for operation during the LEM so that NYPA can meet its commitments to its customers.

In addition to extending the life of the pump generating plant, the refurbishing will lead to greater efficiencies, allowing the plant to generate additional power with the same amount of water.

Having received the first license to operate the Niagara Power Project in 1958, NYPA was issued a new license for 50 years in 2007. The new license took effect on 1 September 2007, ensuring the Niagara project will continue operating for another half century with continuing environmental and recreational benefits to the region.

More than 100 stakeholders, including state and federal resource agencies, local municipalities, customers, and environmental groups, participated in an Alternative Licensing Process that NYPA adopted in 2002, after the approval of the Federal Energy Regulatory Commission (FERC). The alternative approach provided for greater participation by key parties in Western New York from the beginning of the process, differing from the traditional regulatory approach, where the involvement of interested parties is very limited and doesn’t come until after submittal of the license application.

NYPA undertook more than 40 studies reflecting the input of the stakeholders in identifying environmental, socioeconomic, cultural and land-management issues. Their influence also extended to the license application and Applicant-Prepared Environmental Assessment submitted to FERC on 18 August 2005. Those documents were in addition to four of six settlement agreements NYPA provided the commission the following day, with the remaining two submitted as supplements, in May and June 2006.

FERC approved the new operating license on 15 March 2007, five months before the 31 August expiration of the original license, issued by the commission’s predecessor agency in January 1958. FERC could have decided on 30- or 40-year terms for the new license, but chose the longest duration allowed under the law, 50 years, based on the extensive environmental mitigation and enhancement measures, provided for in NYPA’s application and supporting documents. These included:

• Creation of a $12M fund for construction of eight Habitat Improvement Projects (HIPs) at designated areas outside the Niagara project’s boundaries, to protect fish and wildlife within the Niagara River basin. NYPA agreed to provide another $1 million annually for additional HIPs, to be identified by an Ecological Standing Committee comprised of representatives of key local and state organizations.

• Capital Improvements to enhance public access to the river in the area of the project, including additional parking for anglers and others.

• Improvements to recreational facilities operated by the New York State Office of Parks, Recreation and Historic Preservation within or in the vicinity of the project boundary, supported by a nearly $9.3M fund NYPA established for this purpose.

• A $19M fund to address the project’s impact on groundwater flow. The fund will be administered by the Niagara Falls Water Board and provide for enhancements to the city’s Falls Street Tunnel, as well as any future repairs or maintenance related to the capital improvements.

While many of the additional commitments NYPA made under settlement agreements, with such parties as the Niagara Power Coalition, Niagara University, and Erie County and the City of Buffalo, were not required for obtaining the new operating license, they were vital for building consensus for the project’s relicensing.

Through the relicensing of the project, NYPA has provided $109.4M in less than four years, from September 2007 to January 2011, in financial benefits through a myriad of environmental, recreation, energy and economic development projects in the local communities. At the end of the license term, NYPA will have provided around $1B in financial benefits to the surrounding area.

The Niagara project offers a variety of socioeconomic advantages to the people and industries of Western New York including low-cost power, and its employment and spending.

Today, it provides electricity at below-market rates to:

• Seven neighboring states as required by the federal legislation.

“As one of the New York’s most valued resources, the jobs and other benefits generated by electricity from the Niagara Power Project touch almost every home and business throughout Western New York. In the past two years alone, NYPA has helped to create or preserve some 7,200 jobs in the region. The focus on job creation and retention in the region continues to be one of the Power Authority’s top priorities,” said NYPA President and Chief Executive Officer Richard M. Kessel. “Niagara’s benefits to New York are undeniable, as an engineering marvel, and indeed as a bulwark integral to supporting Western New York’s economy.”