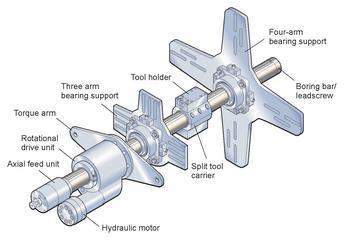 THE 17 main turbines of Hoover dam, maintained and operated by the US Bureau of Reclamation (USBR), generate more than 4BkWh/yr – enough power to serve 1.3M residents in Nevada, Arizona and California, US. Before Hoover dam was constructed, the states along the Lower Colorado river experienced extensive droughts and flooding. Now the region has more reliable water supplies, and power, thanks to a network of dams of which Hoover is the largest. Located on the river at the Nevada-Arizona border, the structure is lauded as one of the US’s seven modern civil engineering wonders. At 221.3m high and 201.2m wide at the base, the dam has a crest length of 379.2m and crest width of 13.7m, with the reservoir, Lake Mead, offering 35.2Mm3 of total storage. From 1939 to 1949, the Hoover dam power plant was the world’s largest hydroelectric installation. With an installed capacity of 2074MW, it is still one of the country’s largest.

While the dam primarily serves the water needs in the southwestern US, it also has ties to Mexico. A 1944 treaty guarantees that specific amounts of water, as defined by the two governments, will reach Mexico every year.

In 1984, a US$170M uprating programme was authorised for the Hoover power plant. The work was performed over several years as part of the routine equipment replacement programme and was funded by the power contractors – Arizona and Nevada each funded about 37% of the costs with the remainder financed by the nine Southern California entities that have contracts for power from the dam. This project increased the total plant capacity from 1345 to 2074MW and improved the efficiency of the power plant. Each power contractor was provided additional capacity in proportion to their investment in the uprating programme to meet the increasing demands of the growing Southwest.

In recent years, additional work to maintain turbine machinery and to improve the overall efficiency has continued, with USBR scheduling major unit overhauls. One of the jobs during a major overhaul is to install new bushings in the turbine area. This past year, the job of line-boring the bushings on the wicket gates was completed with the aid of a tool from Portland-based Climax Portable Machine Tools.

Improving turbine efficiency
Maintaining the 24 wicket gates on each of Hoover dam’s large turbines is part of a major overhaul. Work includes repairing and re-machining each gate. In addition, replacement and re-boring the three bronze bushings that support each gate vertically is needed. While some of that work is contracted out, the Hoover dam maintenance team completes the installation and boring of the bearing surfaces on which the gates turn. For that work, the team installs bushings with undersized diameters where the gates will fit, and then bores them out so they can get an aligned fit.

Since only .01 of an inch clearance exists above and below each gate, aligning the holes for a precision fit is essential to proper gate performance. But this can be a complicated task, as Steve Geisler, hydroelectric mechanic, explains: ‘Usually when you’re aligning a boring bar, you simply center it between the top and bottom holes. But you can’t do that in a hydro plant like Hoover, which went into operation in 1934. Over the years, the concrete has settled and you no longer have embedded parts that are level. Those top and bottom holes are no longer aligned.’

A boring bar on loan from Shasta dam proved to be too large, and other options proved equally unsatisfactory in providing precise bushing alignment, leading to the need to perform the repair a second time. In one instance, the team cut the bushings to size on a lathe, which resulted in a non-centered line bore. In other cases, old boring bars were designed for the operator to straddle as they do the work – an unsafe, unacceptable option today.The supervisor for the job, George Foley, decided a new approach was needed. ‘There was no way to line bore new wicket gate bushings and get them plumb with the equipment we had on hand,’ he says.

Achieving plumb alignment
Foley discovered a better solution in a tool that Hoover dam had purchased for another project, a Climax Boring Bar 6000. ‘Climax helped us to figure out a way to mount the boring bar so it was able to fit all the units we were working on,’ Foley explains.

The BB6000 is a travelling head portable boring bar with a boring diameter range of 152.4 to 914.4mm. The hydraulic rotational drive unit provides a high power-to-weight ratio of nearly 1300ft-lb of torque, with a minimum 5hp hydraulic power unit. The compact mechanical axial feed unit is only slightly larger in diameter than the bar itself. Additionally, the bearing cartridge can be mounted directly on the workpiece when space is tight to easily handle repairs in constricted locations.

Using a plumb wire system to achieve proper vertical alignment, Foley’s crews were able to use the portable tool to line bore bushings and also size and align the new stainless steel plates in the tight space between the wicket gates. Since it is only an 8-inch bore, there is only 2-1/4 inches of clearance left once the 3-1/2 inch bar is accounted for.

Foley says: ‘The three bushings have about 52 inches from top to bottom, and we’re able to keep them plumb within two thousandths, or less. That’s a pretty straight hole.’

Given that outage time is limited, speed is also important. ‘When everything is rolling right, we can finish one set of bushings in two shifts – about 20 hours total – with the boring machine running continually,’ continues Foley.

To help keep the job moving, other tools needed are specially mounted on the bar in a holder. Hydroelectric mechanic Jim Patmore said the easy set up was one factor that helped keep the job on track. ‘Once you’ve lined the boring bar up in the proper position and locked it down, you just need to dial out the size you want, and the bar is going to cut exactly where you want it,’ he says.

Steve Geisler adds that consistency is also valuable: ‘Making things line up right means coming up with better ideas and better tools. With the Boring Bar 6000 we’ve finally got the alignment portion of our job down to a system, without making any mistakes.’

Versatility
Considering the number of technological changes since the early 1930s, when some of the units at Hoover dam were built, the number of things that can be done to improve efficiencies is great. Every time there is a shutdown and a re-build, the crews look to see what else can be made more efficient. Foley notes that the boring bar has the versatility to handle other types of repairs, many related to improving efficiencies. Francis and Kaplan turbines share similar maintenance challenges to Hoover since all use wicket gate design to control water flow into the turbine. Smaller dams sometimes use a valve design. In all cases, a boring bar is a useful maintenance tool to ensure a tight fit.

Climax offers other tools that could be used in a hydroelectric power setting, such as end-facing or flange face re-cutting. It also offers engineering support services for specialised on-site machine tool development and training in the use of its tools for maintenance workers like those at Hoover.

Another area where boring bars can be used is to help replace turbine coupling bolts connecting intermediate shafts and generators. When maintenance crews mate these back up after inspection, the bolts don’t line up exactly. As a result, workers must re-bore the bolt holes and make special bolts to fit the holes so they fit tight per design requirements.