A new line of defence: the abeyance seal

Due to the worldwide response to the Fukushima nuclear accident by regulatory authorities, the ability of reactor coolant pump mechanical seals to cope with the effects of a Station Blackout (SBO) and consequent Loss of Seal Cooling (LOSC) are being investigated. The ability of the Flowserve N-Seal to cope during a LOSC event has been further enhanced. By Mark E. Sanville 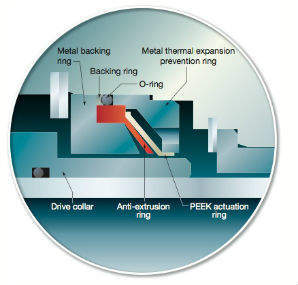 The Fukushima nuclear accident has brought particular attention to the problem of beyond design basis events (BDBE) involving the extended loss of off-site and on-site AC power (ELAP). Such events jeopardize the cooling functions of the plant, including the cooling of the primary pump mechanical seals. Not surprisingly, operators and manufacturers have been challenged to ensure that primary pumps have the ability to cope with the consequences of loss of seal cooling events that last for extended time periods. Any design approach to this challenge must also take into consideration other postulated accident scenarios. For example, the trend toward probabilistic risk-based fire safety analysis and the adoption of NFPA 805 has identified the simultaneous loss of seal cooling and the inability to remotely trip the primary pump as a plausible BDBE scenario. As a result, primary pumps must have some capability to cope with the loss of seal cooling in static and dynamic (pump operating) situations.

The Flowserve N-Seal has a three-stage cartridge utilizing three identical hydrodynamic sealing elements, each carrying one-third of the total differential sealing pressure under normal and transient operating conditions. Each seal element is also capable of handling full system differential pressure. To deal with the Fukushima challenge, Flowserve has developed the abeyance seal — a flow-activated passive device that is designed to provide a near leak-tight seal when (and only when) actuated by the complete failure of all three redundant seal stages. The abeyance seal, coupled with the proven N-Seal, permits plants to respond to a wide range of extended loss of seal-cooling accident scenarios. It has already been installed and is now operating in several US nuclear power plants.

The abeyance seal (patent pending) was designed and tested to support industry compliance with various US Nuclear Regulatory Commission (NRC) requirements, as mandated in 10 CFR 50.63, 10 CFR 50.48, 10 CFR 50 Appendix R of the Code of Federal Regulations as well as National Fire Protection Association standard NFPA 805 and equivalent requirements in other regulatory jurisdictions.

The abeyance seal has only six parts: a metal thermal expansion prevention ring; metal backing ring; PEEK U-cup; U-cup O-ring; anti-extrusion ring; and PEEK actuation ring (Figure 1). The simplicity of the design is one of the features intended to help ensure that the abeyance seal will only actuate when it is needed and will not actuate under normal and transient system operation.
Material selection was an important design consideration. PEEK (polyetheretherketone) was chosen for the critical actuation ring due to its resistance to radiation and elevated temperatures (650°F/343°C) as well as for its beneficial flexural strength and ability to provide reliable sealing under real-world conditions such as scratched surfaces, shaft offset and crud-covered components. Victrex is a leading supplier of the speciality resin.

It should be noted that the abeyance seal seals against a removable metal drive collar (or sleeve, in some cases) and not on the shaft itself. This allows for inspection and easy replacement of this critical sealing surface prior to installation. The operability and performance of the abeyance seal do not depend on the condition of the pump shaft, which can be expected to have accumulated surface damage over years of maintenance and operation. Replacement of the abeyance seal is not required unless the seal has been activated.

PEEK U-cup with O-ring
The PEEK U-cup with O-ring is designed to provide a stationary seal between the abeyance seal and the seal flange; this is critical to achieve extended SBO coping-time capability. The O-ring provides initial sealing, preloading the U-cup lips against the anti-extrusion ring and seal flange. Once pressure builds at the abeyance seal, the process fluid further increases the sealing ability of the U-cup, ensuring near-zero leakage for the duration of an ELAP.

Extensive testing was conducted to demonstrate that the abeyance seal will reliably actuate in the event of a primary pump seal failure. (Although station blackout testing performed on a full-size reactor coolant pump in the 1990s has proven that in a scenario where power and cooling is lost, the N-Seal maintained minimal leakage for a period of eight hours). Tests conducted under simulated real-world conditions, including shaft misalignment, dirt and shaft sleeve scratches, showed that the abeyance seal is capable of withstanding full temperature (550°F/285 °C) and pressure (2250 PSI/15.5 MPa) for more than 250 hours with virtually zero leakage. It was further demonstrated that leakage after depressurization would still remain below 0.068 m³/h (0.3 GPM).

Tests were also conducted to show that the abeyance seal will not actuate during normal operation with normal seal leakages. (The Flowserve N-Seal is a controlled bleed-off seal, so some leakage is normal and removed through the bleed-off ports. The bleed-off design removes excess heat from the seal faces. Each stage has a bleed-off connection which also can be monitored for flow, pressure and temperature, which provides an indication of the condition of each stage.) These tests demonstrated that the abeyance seal will not actuate when passing more than 2.04 m³/h (9 GPM) of cold water. Extrapolation of other test data indicates that actuation will only occur when the leakage rate of water through the seal exceeds 6.82m³/h (30 GPM).

As a complement to the abeyance seal testing, tests were also conducted to demonstrate that the N-Seal was capable of operating without cooling for a minimum of one hour under dynamic conditions (pump operating). These tests were done to establish minimum coping times associated with the probabilistic fire scenarios mentioned earlier. The tests simulated a loss of cooling, with only two of the three seal stages functioning. All components were found to be in good condition after this full-pressure and temperature dynamic test. The conclusion is that the N-Seal is capable of coping with the postulated fire scenario and that the abeyance seal — which like all primary pump shutdown seals is essentially a static device — should not actuate in an event where the pump is rotating.