60 Years of Atoms for Peace

Jessica Varnum reflects on how President Eisenhower’s ‘Atoms for Peace’ speech has transformed the nuclear industry. 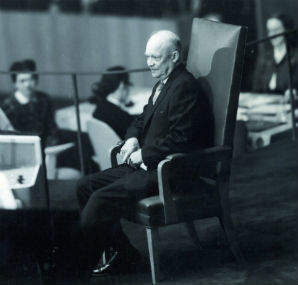 On December 8, 1953, US President Dwight David Eisenhower spoke before the United Nations General Assembly, pledging the United States’ "…determination to help solve the fearful atomic dilemma — to devote its entire heart and mind to find the way by which the miraculous inventiveness of man shall not be dedicated to his death, but consecrated to his life."

Sixty years have elapsed since the so-called ‘Atoms for Peace’ speech. Its implementing programme gave birth to the global nuclear industry, and precipitated remarkable progress in the use of nuclear technology to improve public health and human development.

But not all of the news is good, as the programme contributed to heightened nuclear risks. Atoms for Peace provided political cover for the biggest nuclear arms build-up in US history, and helped fuel the Cold War arms race.

A study in contrasts, Atoms for Peace precipitated both the creation of the international nuclear nonproliferation regime and many of its most intransigent challenges. Few speeches in US history have been — at once — so controversial, so poorly understood, and so lasting in their legacies.

By December 1953, the Soviet Union and the United Kingdom had the atomic bomb. Both the United States and the USSR had successfully tested thermonuclear weapons. Additional countries seemed likely to pursue nuclear weapons. To President Eisenhower, it had become apparent that strict policies of secrecy and nuclear technology denial were undermining US policies both at home and abroad. US policies had failed to prevent further nuclear proliferation, fuelled the arms race, alienated existing and prospective allies, suppressed the humanitarian benefits of civil nuclear technology, and stunted the development of the US nuclear industry.

Revolutionary, rather than evolutionary, reforms were needed. In a radical departure from the policy of nuclear secrecy, the President announced that the United States "…would be proud to take up with others ‘principally involved’ the development of plans whereby…peaceful use of atomic energy would be expedited."

"Sixty years later, the bargain implicitly laid out in the Atoms for Peace speech remains foundational to the nuclear nonproliferation regime"

To the modern reader, Eisenhower’s exposition of a proposed US and international approach to nonproliferation is nothing special. But Eisenhower’s proposals were revolutionary in their time. Sixty years later, the bargain implicitly laid out in the Atoms for Peace speech remains foundational to the nuclear nonproliferation regime. In exchange for access to peaceful nuclear assistance from the nuclear technology holding countries, non-nuclear weapon states agree to forego nuclear weapons. Seeking to separate military and civil uses of nuclear technology, the President proposed the establishment of an "International Atomic Energy Agency…under the aegis of the United Nations."

"Arguably, positioning the United States advantageously vis-à-vis the Soviet Union, both materially and politically, was the Eisenhower Administration’s priority Atoms for Peace objective"

What of economic motivations? Undeniably, the US nuclear industry owes its existence to Atoms for Peace policies, as do many of the world’s nuclear industrial players. By 1953, companies involved in supporting defence nuclear defence programmes were impatient to develop and sell civil technologies, from small-scale research reactors to nuclear power plants. Eisenhower’s speech laid the ground for successful amendment of the 1946 Atomic Energy Act (AEA) in 1954 to permit privatization and commercialization of fuel cycle technologies, cooperation with foreign partners, and international nuclear commerce. Ultimately, Atoms for Peace yielded billions of dollars in civil nuclear commerce for the US economy [5]. However, the motives behind Atoms for Peace extended beyond nonproliferation, arms control, and economic interests. Arguably, positioning the United States advantageously vis-à-vis the Soviet Union, both materially and politically, was the Eisenhower Administration’s priority Atoms for Peace objective.

In addition to winning the United States new friends, the Atoms for Peace initiative bolstered existing alliances. Many, including the United Kingdom and Canada, had been alienated by the AEA of 1946, which effectively prevented cooperation on both military and civil applications. The Eisenhower administration’s dramatically more transparent and cooperative approach to civil nuclear applications eased both legal and cultural constraints on collaboration, helping to mend many strained relationships.

Yet in contrast to its PR-friendly title, the Atoms for Peace initiative had important military dimensions, providing political cover for the wholesale nuclearization of US defence policy. The Eisenhower Administration brought the world Atoms for Peace and the January 1961 Farewell Address warning of the dangers of the military-industrial complex; ironically, it also did the most of any Cold War administration to increase the size and role of the American nuclear arsenal. The US nuclear arsenal went from just over 1000 nuclear weapons when Eisenhower assumed office to around 22,000 at the time of his farewell address [6].

In its initial decades, Atoms for Peace appeared to be a net nonproliferation success. Between 1953 and 1974, only France, China, and Israel acquired nuclear weapons. Meanwhile, the international community made major progress building the modern nonproliferation regime, establishing the International Atomic Energy Agency (IAEA) in 1957. In 1962, the United States empowered the IAEA with implementation of its existing and future bilateral safeguards agreements. By 1968, the Treaty on the Non-Proliferation of Nuclear Weapons (NPT) had been successfully negotiated, and would require parties to agree to IAEA comprehensive safeguards agreements.

Like all policies, however, Atoms for Peace was imperfect — most notably in nonproliferation terms. It placed excessive faith in the capability of safeguards to deter cheating, and none of its follow-on initiatives provided for punishment of cheaters. In 1974, India tested a so-called ‘peaceful’ nuclear explosive device. It had produced the requisite plutonium using a Canadian reactor and US-supplied heavy water. Other recipients of ‘peaceful’ nuclear assistance from the United States and other suppliers pursued nuclear weapons (though few ultimately acquired them). And the Iraq of the early 1990s attempted to build nuclear weapons clandestinely by constructing undeclared nuclear facilities alongside the ‘peaceful’ facilities safeguarded by the IAEA, greatly undermining the faith of the international community in the efficacy of safeguards.

Additionally, the Atoms for Peace programme encouraged the export of weapons-useable highly enriched uranium. Beginning in the 1950s, the United States, the Soviet Union and other emerging nuclear suppliers ultimately "…provided nearly 50 countries with HEU to fuel hundreds of civilian research reactors" [7]. This legacy poses ongoing proliferation and nuclear security risks. Neither the AQ Khan nuclear trafficking network nor the possibility of nuclear terrorism could be envisioned as serious latter-day threats in Eisenhower’s time.

Finally, the architects of Atoms for Peace cooperation paid selective attention to geopolitics. Apartheid-era South Africa, Iran, Israel, Pakistan, India, Argentina, and Brazil all received US nuclear assistance. That this list included countries involved in ongoing regional conflicts was not just a secondary consideration to US policymakers — it was virtually irrelevant given the need for both old and new allies in the all-consuming Cold War struggle.

The United States also provided numerous regimes with nuclear technology on the basis of bilateral friendship (for example, pre-1979 Iran). This short-sighted policy set the stage for future proliferation challenges, as the successors of pro-US regimes were free to use this technology against the interests of the United States.

The Atoms for Peace programme is commonly perceived by modern critics as incredibly naïve. Shane Maddock argues, "the Eisenhower administration ignored the fact that nuclear plowshares could be recast as swords" [8]. Such modern interpretations fail, however, to recognize the Cold War context. Eisenhower was aware that peaceful nuclear cooperation posed potential proliferation risks. However, like many of his successors, the president viewed the benefits of Atoms for Peace for the US-Soviet Cold War balance as higher-priority than any accompanying proliferation risks. Nonproliferation is but one of many — often conflicting — US national interests. It does not and cannot always take priority.

While Atoms for Peace hastened the emergence of certain regional proliferation challenges, it was also the forbearer of the modern nonproliferation regime.

Moreover, it enabled the development and widespread use of civil nuclear technologies to benefit humanity. While the underlying Atoms for Peace bargain remains intact, it has evolved in response to nonproliferation ‘lessons learned,’ and to the shifting geopolitical landscape. On balance, sixty years later, Eisenhower’s Atoms for Peace speech deserves to be remembered more for its visionary than its short-sighted qualities.

Extracts of a longer article, which appeared in the December 2013 issue of Nuclear Engineering International.

[6] Peter Kuznick, "Japan’s Nuclear History in Perspective: Eisenhower and Atoms for War and Peace," Bulletin of the Atomic Scientists 13 April 2011.