A 3D visualization model can be used to carry out a successful simulation of equipment maintenance, as a project at the Gezhouba Hydropower Station has shown. 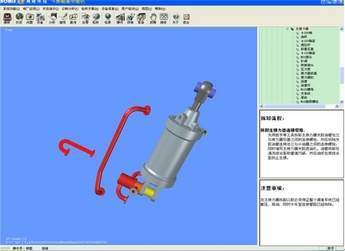 With the expansion and development of power systems, large quantities of high-capacity hydro-turbine generator sets have been placed into production. Condition monitoring and analysis of these turbine generator sets (HGS) is still dependent on traditional display techniques such as simple visualization techniques, large screen display, data display, and window screen display switching [2-4]. Although HGS operating states can be described by these monitoring and analysis methods, the monitoring content is separated, meaning the operator must understand the whole system structure and principles. However, these analysis methods were easily impacted by personal subjective thinking, which will affect the reliability of the system.

Intuitive and real-time condition monitoring has become an issue which needs to be solved urgently. A number of researchers have carried out studies in this area. Literature [5-7] proposed condition monitoring methods based on visual modeling and model features of HGS, including studying the operational states and equipment health condition. The digital HGS research of operating states analysis and fault diagnosis has been described in literature [8]. Power system data display, operating states presentation, condition tendency expression and other aspects of the power system have also been reviewed [1-3], noting that data visualization, analysis, and human-computer interaction technology[11] are the trend in development of power system operating states visualization.

In order to solve the existing problems of the isolated condition monitoring content, the static and two-dimensional display, a condition monitoring platform based on 3D visualization of HGS has been established. This visual platform is built under the Hydropower Plant Optimal Maintenance Information System (HOMIS)[8, 10], which integrated condition monitoring, operating states analysis and fault diagnosis. The equipment 3D visual modeling of HGS, data exchange, integration and sharing, human-computer interaction were also combined.

This article describes the 3D visual modeling technique of HGS, including details on the real-time condition monitoring and history operating states analysis of the model.

In the process of components visualization modeling, the related technical documentation was studied; the primary design parameters and the actual structure were collected; and finally, the equipment modeling job was executed step by step from the smallest component model [5].

The visual models assembly process is developed on the basis of components visualization modeling. The model is built on the real physical structure of equipment, including the following steps: the baseline components selection; definition of constraint relations; limitations of the range of operation; and the production animation process[6].

Different modeling methods were used for different equipment: for mechanical, hydraulic and some electrical equipment 3D solid modeling visualization methods were selected in order to describe the real physical process; for electronic and electrical equipment, because of its uncertain and diversity shape, the visualization models were described by graphics, images or diagrams.

HOMIS is an on-line Condition Monitoring and Diagnosis System (CMDS) developed for the HGS [8, 10], as shown in Figure 3. It is composed of three specialized Data Acquisition and Analysis Units(DAAU) for electric facility (such as partial discharge in stator winding of the generator), mechanical facility (such as vibrations, cavitation of hydropower turbine, partial discharge of the transformer, etc.), control systems (such as governor, excitation system), and an integrated monitoring and diagnosis unit.

Besides the 3D visualization model, the monitoring data integration is also an important part of condition monitoring. Data sources are divided into two aspects: data share via communication and measured by added sensors. Most of them are acquired via communication with the existing control systems, such as SCADA Local Control Unit (LCU),fault recorder system, Governor and Excitation Regulator, and the communication is physically isolated. Besides the data obtained from the SCADA, some operation states, such as ultrasound of turbine cavitation, vibration of guide bearings, etc., are directly measured by added sensors.

To ensure the reliability of the equipment for HGS, the equipment and system performance was monitored, evaluated and analyzed in real-time. The monitoring and performance result was also reported to operator, which can help the operator understand the equipment’s health condition and avoid incidents. In the HOMIS integrated environment, the real-time HGS and its subsystems and equipment condition were monitored, including real-time display and real-time alarm.

In order to monitor more equipment data for HGS, the curve demonstration was employed. The curve monitoring connects the data into a curve, and the short-term changes and trends of data curve can be easily observed. The user-defined curve parameters select was supported in the curve demonstration, which contained all the analog variables, temperature variables and switch variables. When the real-time states overstep the specified range, a real-time alarm is issued.

Suppose St, Smin, Smax were the equipment states (or performance indicators) and its lower limit, upper limit respectively, if

the equipment is in a normal state, otherwise the equipment has failed. For example, the startup and synchronous connection of HGS should be completed in three minutes, if not a failure has occurred.

To give the real-time operating states alarm of HGS, a color-mapping scheme was applied combined with the bar graph display technique.

The use of color expression is an important part of the visualization display, so a color mapping scheme that maps different states values for different colors is needed. Red, green and blue (RGB) components were used to express color generally. A color-mapping scheme can be described as a function vector:

in which v is the mapped value that usually take the actual data normalized to [0, 1] results, where the corresponding color components respectively.

Historical analysis is also the important part of condition monitoring of HGS, including data mining historical data to find out the equipment operation rules.

To utilize the HOMIS integrated environment, statistical analysis and correlation analysis methods were used to develop the equipment historical states analysis on the basis of 3D visualization model.

The periodic statistics (such as daily, weekly, monthly, etc.) of operating time, operating environment, performance indicators of equipment were generated and reported to the operator. Operating state statistical analysis was illustrated combined with 3D visualization model, which can help the operator to query and analyse the equipment.

According to the equipment statistical analysis, equipment performance decline or failure was judged and maintenance decisions were made. Statistical analysis provided the sequence of the variable states of maximum, minimum, average and standard deviation.

The operating states and performance related to the operating condition of the HGS. Correlation analysis supplied the trends query of state variables associated with related state variables (such as the stator temperature with the active power, input water temperature, output water temperature changes, etc.), and the trend query of performance associated with HGS condition (such as the vibration swing with the active power, head alteration , etc.). By using the correlation analysis, the operating states of HGS and the performance degradation can be estimated.

Suppose an equipment state displayed abnormally with the correlation analysis, when the mouse pointed to the state value, the related state variables were correlated automatically. On one hand, related state variables threshold, bar graphs, and trends were displayed. On the other hand, the 3D visualization operating states of the specific equipment was offered, which can support the equipment anomaly analysis and fault location.

A 3D visual simulation of virtual equipment assembly can be operated by taking advantage of the 3D visualization condition monitoring platform and data-driven equipment 3D solid model of HGS. The 3D visual simulation of the main servomotor assembly is shown in Figure 6.The user can use the mouse to handle the 3D visualization model and execute the equipment assembly processing. At the same time, maintenance processes and relevant skills will display dynamically in the 3D simulation interface, which can guide the user to maintenance and easily carry out staff training.

Operating states dynamical display consists not only of the equipment data and data curve dynamic display according to the data refresh cycle changes, but also includes a data-driven dynamic 3D visualization model of HGS.

As shown in Figure 7, the real-time monitoring of the bearing temperature of Gezhouba hydropower station was illustrated by data curve and dynamic 3D visualization model of HGS, which includes upper guide bearing, turbine guide bearing and thrust bearing real-time condition monitoring. From the 3D visualization model in the figure, the vibration swing is up to 546.7um and closes to its threshold value, and a further analysis was needed to confirm the health status of equipment; meanwhile, the colors of the bearing temperature changes along with the corresponding variables of the bearing. Therefore, it is easy for the operator to master real-time operating states of HGS.

Under the 3D visualization condition monitoring platform, real-time states display with bar graph combined with equipment operating characteristics and make the use of color temperature mapping techniques. The color was used to alert the operator of the equipment state. The color of the bar graph changes with the monitoring variables.

As shown in Figure 9, a statistical analysis of upper guide bearing operating states of Gezhouba hydropower station was displayed. In addition to visual condition monitoring display of the guide bearing, the average temperature was illustrated with a bar graph within the statistical period. The historical state of equipment can be obtained at a glance, which can facilitate the operator to execute health condition analysis and maintenance decisions.

The association analysis of cooling air temperature of Gezhouba hydropower station based on 3D visualization model is shown in Figure 10. Apart from state threshold display and trend display, the cooling air temperature of the generator is described in detail using the 3D visualization form. The operator can get the correlated equipment operating states, and develop the exception analysis and diagnostic maintenance of HGS.

As the core technology of HOMIS, condition monitoring for HGS based on 3D visualization has been successfully used for 22 HGS in Gezhouba Hydro Power station. It makes an important contribution for the operating states visual display, equipment analysis and maintenance of the HTGS. It is also helping to improve the efficiency and quality of the condition monitoring and progressive realization of condition-based maintenance for the HGS.