California-based Deep Isolation claims to have the answer to the world's spent nuclear fuel problem, with more than 30 countries playing host to a growing stockpile of radioactive waste 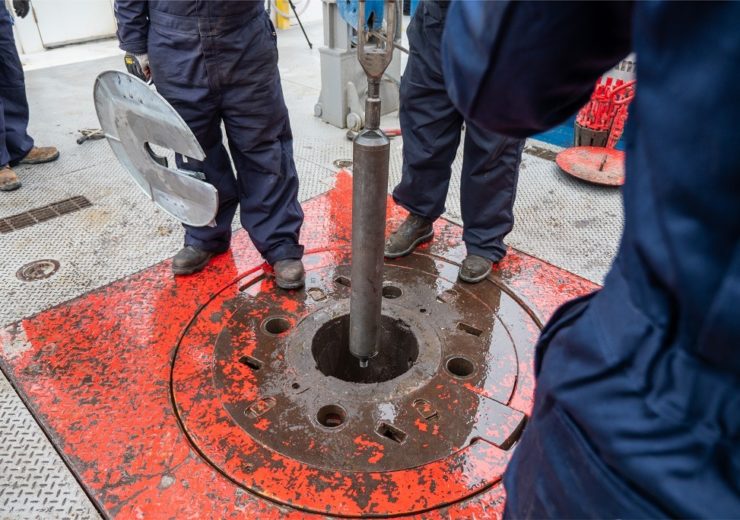 Workers on the drilling rig platform at a U.S. test and training facility prepare to lower the Deep Isolation prototype canister into a drillhole 2,200 feet deep and placed 400 feet into the horizontal disposal section using a wireline cable and underground “tractor.” The canister prototype is approximately 4 inches in diameter and 30 inches long using a 30-pound metal tube as the mock-waste payload. The entire package weighed approximately 83 pounds and simulates the weight and dimensions of a capsule used for separated Cesium/Strontium waste (Credit: Deep Isolation)

Nuclear power still plays a vital role in the world’s energy mix but dealing with the radioactive waste it produces is more often than not a losing battle – Deep Isolation believes it has the answer.

Based out of California, the company has developed technology it claims can solve a problem its CEO Elizabeth Muller argues is second only to climate change in terms of its environmental severity.

Capitalising on advances in drilling technology, the solution stores spent nuclear fuel in corrosion-resistant canisters and places them in drillholes deep beneath the earth at sites near where the waste was produced so as to minimise costs.

Here we speak with Elizabeth to learn more about the nuclear waste problem and Deep Isolation’s answer to it.

What is Deep Isolation’s history?

We launched Deep Isolation in 2016 and spent our first two years doing due diligence on our technology – we started talking publicly only when we became confident that the technology was sound.

We saw rapid growth from early 2018 when we started our seed round and we closed that oversubscribed round in January 2019, raising $10m (£7.8m).

Also in January, we completed our first-ever public technology demonstration, proving that prototype canisters built for nuclear waste can be successfully placed and retrieved thousands of feet underground.

Right now, we have 22 people, including approximately a half-dozen experts and consultants assisting in specialised areas.

Early on, we formed an advisory board of experts, leaders, and visionaries in key areas.

The board includes a Nobel Prize winner, former member of the Blue Ribbon Commission on America’s Nuclear Future, professors from the University of California, Berkeley, and successful entrepreneurs and innovators.

These leading experts bring valuable experience and insight to help work through the intricacies of nuclear waste disposal programmes, preserve innovation and entrepreneurship, and embed critical-path competencies like stakeholder engagement.

Has being based in California proved beneficial to your work?

You can witness the influences and resources of our California roots clearly reflected in our approach and in our business model.

With our headquarters located a few blocks from the University of California, Berkeley, there is a vibrant scientific and technical community here, with world-class brainpower driven by a unique innovative spirit and a deep commitment to the future of our planet.

Our team is composed of some of the best minds and highly reputable professors and scientists at the UC Berkeley.

Silicon Valley is filled with successful entrepreneurs. Several of them sit on our advisory board, which is proving extremely helpful in developing our strategy.

Furthermore, there is a tremendous pool of talent in the Bay Area. These are people enthusiastic about both entrepreneurship and environmental issues.

It is a wonderful base on which to build our global team.

Can you explain the severity of the world’s nuclear waste problem?

In my view, the global nuclear waste challenge is second only to climate change as an environmental problem.

The big difference is we now have a solution for nuclear waste – high-level nuclear waste and spent nuclear fuel disposal is among the biggest and most expensive environmental challenges we face.

According to the International Atomic Energy Agency, there are approximately 370,000 tonnes of radioactive spent fuel that is being temporarily stored in pools and dry casks at hundreds of sites around the world.

No spent nuclear fuel anywhere in the world has yet been placed in a permanent repository – this represents an opportunity of a $500bn (£388bn) global market and growing.

Decades with little progress on radioactive waste disposal represents a challenge for governments around the world to do what they promised to do.

After 50 years, we finally have the canonical model for a nuclear waste solution, which we believe, 20 years from now, will be the way people dispose of nuclear waste.

What is your nuclear waste disposal technique?

When we looked at addressing the nuclear waste challenge, we noted the advances in directional drilling capabilities in the oil and gas sector in the last two decades.

Deep geologic disposal is the preferred way to isolate highly radioactive material from the earth’s biosphere.

Seeing an opportunity, we asked what if we use horizontal drillholes to reach more stable rock formations deep underground and dispose of the spent nuclear fuel piling up at reactor sites around the world?

This became the basis of our approach.

We will position nuclear waste in patented, corrosion-resistant canisters – typically nine to 13 inches in diameter and 14 feet long – deep into horizontal drillholes.

The rock formations at these depths, we know from geologic research, remain stable for tens to hundreds of millions of years.

A Deep Isolation repository begins with a vertical “access” section that goes down from a few thousand feet to a few miles, depending on the specific geology.

The drillhole then gradually curves, over a distance of roughly 1,000 ft, until the hole is near horizontal.

We give it a slight upward tilt for additional safety and once all canisters are in place and the horizontal portion is at capacity, the vertical access section of the drillhole and the beginning of its horizontal disposal section are sealed using rock, bentonite and other materials.

The horizontal drilling technology involved is highly developed and can be implemented at a relatively low cost.

Our approach makes it possible to dispose of the waste at, or near, existing nuclear power plants.

This removes the costs and public controversy in transporting radioactive waste.

Deep Isolation technology is available now and ready to deploy – internationally, with the right customer and government support, we could begin safely disposing of commercial nuclear waste within two to three years.

There are many nations chasing a solution and we believe we have a good one.

We are actively involved in conversations with governments and potential licensing partners around the world, including in North America, Asia, and Europe.

We believe our solution is well suited for many of the 31 countries around the world stuck with growing stockpiles of nuclear waste in desperate need for a ready-to-deploy solution.

What are your plans for the future?

We are ready to implement – that could come in a few forms.

We can license our know-how to governments and partners in need of a solution to their growing nuclear waste challenge.

This includes our technological know-how but also our siting and stakeholder engagement expertise.

Our goal is to enable countries to solve this issue. We can also be a subcontractor for organisations that would prefer us to handle the disposal.

Our work going forward lies in elaborating custom solutions tailored to each country that wants to develop Deep Isolation repositories.

At the same time, we continue to make advances in the technology, canister design, and other intellectual property underpinning the value and versatility of our approach.

What I know is simple: Whatever the future of nuclear energy, the waste is here now. It has been for decades.

No one in the world is making real progress towards a solution. We believe Deep Isolation is that solution.

What can governments around the world do to better solve the global nuclear waste issue?

Governments can better engage the private sector to solve this issue. We know how to do this.

SpaceX is successful through innovation backed by government purchases of their services. Those commitments made the technology investments feasible.

I think great things are possible through public-private partnership. Governments can mobilise the resources and national will that drive solutions.

The private sector can develop flexible and cost-effective technologies through innovation.

Working together, we can safely and efficiently create nuclear waste management programmes that really work, that protect people and the planet, and that don’t have to cripple national budgets and economies to do it.

Furthermore, we see that countries on the most successful nuclear waste management paths use a siting process that prioritises dialogue and stakeholder involvement in lockstep with technical progress.

Stakeholder engagement at all levels is part of Deep Isolation’s DNA – our approach and business model begin and end with the people and communities most affected by the global nuclear waste challenge.

Together, we are convinced we can end the stalemate.