What is China’s solar highway? Profiling the 1km energy-producing road in Shandong

As part of its bid to reach 1,300GW of solar energy capacity by 2050, China built a 1km solar highway that's capable of sending 1GWh every year to the grid - enough to power 800 homes 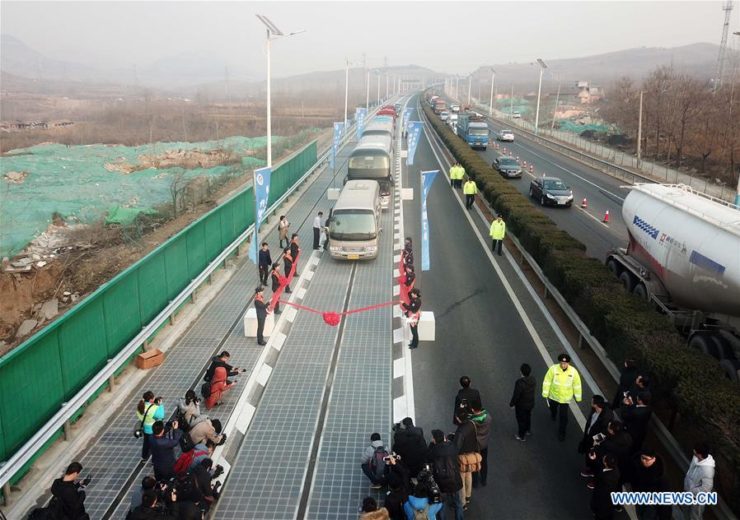 Perhaps more so than any other developed country, China is confronted with the effects of pollution and is therefore establishing vast amounts of renewable energy infrastructure – of which the nation’s solar highway is a particularly innovative example.

In 2015, China overtook Germany as the largest producer of photovoltaic power and two years later solar accounted for 118.2TWh of the country’s energy mix – by 2050, it aims to increase its capacity from 130GW to 1,300GW.

What is China’s solar highway?

However, the Chinese government plans to use the electricity created by its solar highway to power street lights, billboards and CCTV cameras, as well as to heat the roads surface to melt any snow that gathers on it.

In its first 14 weeks in operation, the road generated 96MW of energy.

It comprises a protective surface layer made of transparent concrete, which can reportedly handle 10-times the pressure of standard asphalt.

Beneath that is a middle layer of solar-powered batteries, which generates the road’s electricity, above a waterproof insulation layer to prevent any dampness from the ground below.

It’s estimated that roughly 40,000 cars will be able to drive over the solar highway every day, with two lanes to choose from in addition to an emergency lane to help ease congestion.

Xu Chunfu, chairman of the project’s developer Qilu Transportation Development Group, said: “The project will save the space for building solar farms and shorten the transmission distance.

“With the development of solar power in China, the cost can be further reduced.”

His design teams argues if two lanes of every expressway in China was to be fitted with the solar panels surface as seen in Jinan, together they would generate 7 million GWh of power every year.

This is equivalent to almost 1.3-times the amount of China’s total residential energy consumption 2015, and would cut greenhouse gas emissions by 7.2 billion tonnes.