Wärtsilä designed the modules and sourced the required equipment that includes valves and instruments, from suppliers around the world 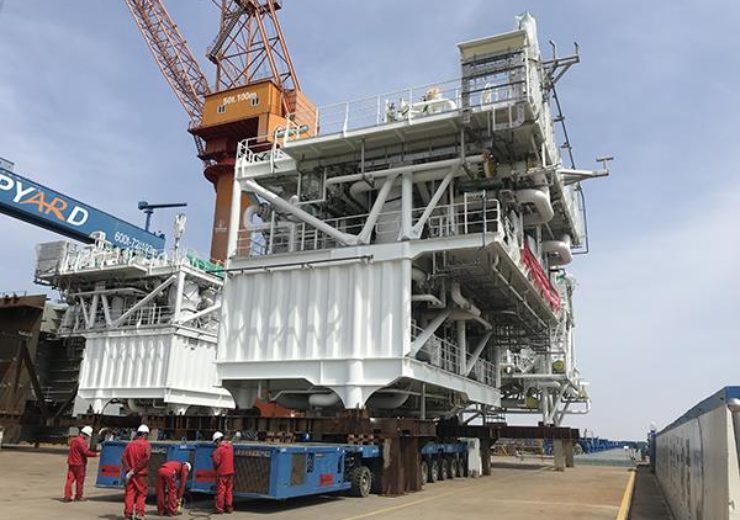 The Wärtsilä modules, here being moved onto a barge, were delivered from the Cosco yard to arrive in Shanghai in time for the scheduled launch of the vessel. (Credit: Logistic Plus)

Finland-based technology company Wärtsilä has announced that it has successfully managed and delivered the three regasification modules for Floating Storage Regasification Unit (FSRU) in China.

The vessel, named ‘Transgas Power’, was constructed at the Hudong-Zhonghua shipyard located in Shanghai for Greek operator Dynagas.

The new modules are designed and the required equipment that includes valves and instruments are sourced from suppliers around the world.

In September 2018, the contract to fabricate the units was awarded to the Cosco shipyard in Qidong, China.

Wärtsilä said that the work on the contract has been managed and coordinated from its office in Asker, Norway.

Wärtsilä Marine Gas Solutions project manager Geir Kirkemo said: “Building Regas modules is something of a jigsaw puzzle. However, thanks to detailed planning, excellent teamwork, open communication, and great cooperation we delivered the project to the client’s full satisfaction and on schedule.

“We always aim to be the best possible partner to our customers, which apart from offering technical solutions at the highest level, involves listening closely to the client, and striving always to fulfil his expectations.”

The three regasification modules, which are weighing 450, 80, and 240 tonnes, have been delivered on 28 March while the FSRU was launched two days later.

Wärtsilä has also delivered the related regasification equipment that includes pumps, heat exchangers, valves, and instrumentation for installation in the engine room.

The regasification modules delivered for the China’s first new built LNG FSRU are based on the use of seawater and steam as energy sources, and water/glycol as the energy carrier in a combined loop.

Wärtsilä had signed the original contract in September 2017.