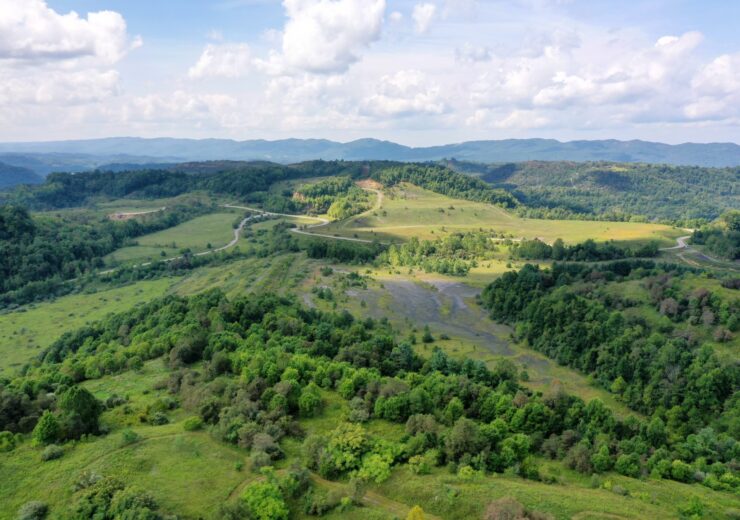 The Nature Conservancy and Dominion Energy Virginia today announced an innovative collaboration to develop one of the first utility-scale solar projects on former surface mines in the coalfields of Southwest Virginia.

The Highlands Solar project will repurpose roughly 1,200 acres of the former Red Onion surface mine and surrounding properties in Wise and Dickenson Counties. The project will generate approximately 50 megawatts of solar energy, enough to power 12,500 homes at peak output, as well as bring additional benefits to the area, such as an increase in local tax revenues, the ability to provide additional funding through Solar Siting Agreements, and the creation of clean energy jobs.
“This project is a huge win for Southwest Virginia’s economy,” said Ed Baine, President of Dominion Energy Virginia. “It’s also another major step toward building a 100 percent clean energy economy in Virginia. Repurposing former coal mines for solar is a smart way to enhance the region’s economy and bring renewables to Southwest Virginia.”

“Southwest Virginia and the wider Central Appalachian coalfields have an important role to play in the renewable energy economy,” said Brad Kreps, director of The Nature Conservancy’s Clinch Valley Program. “Some of the region’s former mined lands are well suited for solar development and by directing development towards these areas it will help us conserve the region’s intact forests for wood products, carbon storage, wildlife habitats, outdoor recreation and tourism. By collaborating with Dominion Energy and other companies on these initial projects, we hope to develop a model that can be replicated in other coal mining regions across the U.S.”

The Highlands Solar project will be developed within the Cumberland Forest Project and surrounding properties. Managed by The Nature Conservancy and owned by its Cumberland Forest, LP impact investment fund, the Cumberland Forest Project was announced in 2019 and encompasses nearly 253,000 acres of land in Southwest Virginia, Eastern Tennessee, and Eastern Kentucky. The vast majority of the property is designated for the protection and restoration of native forests. However, there are several thousand acres of non-forested, former surface coal mines that can support solar energy projects and local economic development with minimal impacts to the environment.

Over the next two to three years, Dominion Energy will conduct additional field studies, further develop the project plans, and complete the local and state permitting processes. The company will jointly develop the project with ANTARES Group, which will serve as the owner’s engineer. The company plans to begin construction in 2024 or 2025, subject to review and approval by the Virginia State Corporation Commission.

In addition to reinvesting in Southwest Virginia’s economy, the project will support the goals of the Virginia Clean Economy Act, which calls for Dominion Energy Virginia to produce its electricity from 100 percent carbon-free sources by 2045.

“Virginia has set important and ambitious goals to produce clean, affordable energy while growing its economy,” said Virginia Secretary of Commerce and Trade Brian Ball. “Southwest Virginia has long been an energy leader, and the pursuit of solar projects on former mined lands represents an exciting new chapter and important opportunity for the region’s economic diversification.”

The project will also advance the goals of legislation sponsored by Delegate Terry Kilgore in the 2021 General Assembly Session, which encouraged the redevelopment of former mined lands and brownfields as sites for renewable energy projects.

“For generations Southwest Virginia’s coalfields have powered America’s homes and our economy,” said Delegate Terry Kilgore. “As we transition to cleaner energy, Southwest Virginia is once again leading the way. I’m excited to see The Nature Conservancy, Dominion Energy, and other solar developers investing in our region and helping to pave the way for the next generation of economic progress in Southwest Virginia.”

The Highlands Solar and other projects in Southwest Virginia will help advance the work The Nature Conservancy has been pursuing around the country, including in neighboring West Virginia, through its “Mining the Sun” initiative to demonstrate the win-win potential of renewable energy development on previously disturbed lands.

State Senator Todd Pillion: “I am excited about this new chapter for Southwest Virginia. The innovative partnership between The Nature Conservancy and Dominion Energy will help open new doors to our workforce and provide new opportunities for economic development throughout our region.”

J.H. Rivers, Chairman, Wise County Board of Supervisors: “This is great news for our county. Dominion Energy and The Nature Conservancy are long-time partners with Wise County, who have supported our community through economic development and cleaning up our watershed.”

Josh Evans, Chairman, Dickenson County Board of Supervisors: “On behalf of the Dickenson County Board of Supervisors, we are excited and grateful to see this investment by Dominion Energy. We are proud to highlight our century long contributions to the Commonwealth of Virginia and the nation by our coal miners. This new opportunity presents a chance for us continue to support our coal sector as well as diversify our tax base and provide increased revenues for our schools and law enforcement.”