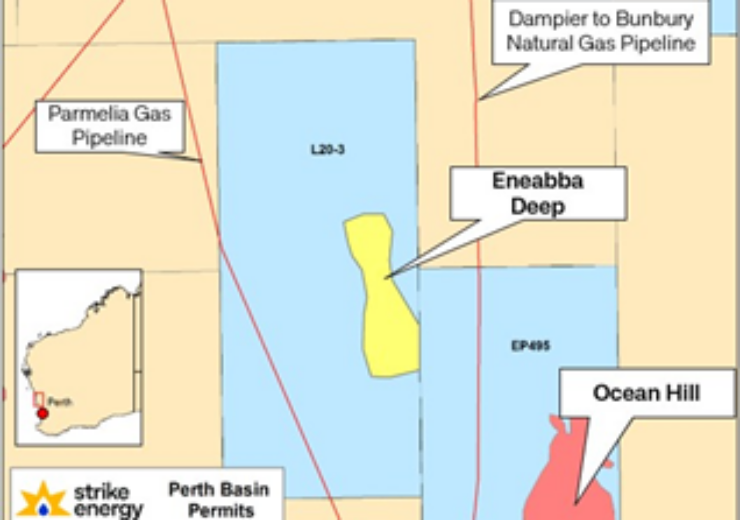 Strike Energy Limited (Strike – ASX: STX) is pleased to announce that it has been selected as the successful bidder for Perth Basin block L20-3 at the end of the WA Petroleum Acreage Release 1 of 2020.

The L20-3 block is located at the southern edge of the prolific Perth Basin Permian Gas Fairway, which has yielded more than 3 TCF of discoveries to date (including Strike’s West Erregulla gas discovery). The block is flanked by gas discoveries,  with the  Permian  Beharra Springs complex and West Erregulla fields to the North, the Permian Woodada field to the West and the Ocean Hill Jurassic wet gas discovery to the East.

The block is perfectly situated from an infrastructure perspective,    with both the Parmelia Gas Pipeline and the Dampier to Bunbury    Natural    Gas    Pipeline,    running adjacent to either side of the block. On success this pipeline optionality may deliver discoveries even faster to market and enable further cost reductions in what is regionally already understood as a low-cost development.

In the South West of the block, industrial gas user Illuka operates its Eneabba mineral sands and rare earths mine, which may provide a nearby energy customer for any successful discovery.

The permit sits within the area of land that was the centre of the Yamatji Nation Indigenous Land Use Agreement, and as such will be progressed straight to exploration permit award without the need to secure a Native Title Agreement over the area.

The L20-3 block is situated south of the Abrolhos Transfer zone, to the East and downdip of the Woodada gas field and to the West and updip of the Coomallo Trough (in which the large Ocean Hill gas discovery is nested). Correlation of the Permian section from the Woodada field into L20-3 is compelling and suggests a trap is present within a large horst block on the east part of the Cadda Terrace, just West of the Coomallo Fault. This lead: Eneabba Deep, is the primary target within the block and has significant  potential  for stacked,  Permian-aged reservoirs (Kingia, High-Cliff, Beekeeper / Wagina & Dongara equivalents) hosted in structural closure. This is analogous to the structural trapping mechanism in place in the Beharra Springs area. Strike mapping indicates that the prospective fairway for thickened Permian reservoir sands, with porosity preservation at depth caused by syndepositional clay coatings on sand grains could extend as far South as the Cadda terrace in the L20-3 block.

Whilst the current seismic data is sparse, Eneabba Deep could have closure in excess of 20 km². This may represent a significant gas resource should Strike’s exploration activities in the permit be successful.

Additional secondary prospectivity exists in the shallower Jurassic Cattamarra Coal Measures. Hydrocarbons are anticipated to have migrated from the Triassic Kockatea shale in the adjacent Coomallo trough through bounding faults and into fluvio-deltaic channel sand complexes in structural closure. This is analogous to hydrocarbon migration seen in the Mt Horner oil field and the nearby Ocean Hill gas discovery.

Strike Energy Limited Managing Director and CEO Stuart Nicholls said:
“The award of this exciting acreage is acknowledgement of Strike’s developing position in Western Australia as a future domestic energy and fertiliser supplier.

The addition of this block almost completes the connection of Strike’s acreage, making a contiguous land holding from North to South. This position in the Basin is adjacent to the North/South extensional faults which provide the primary route for hydrocarbon migration across the basins various plays.

interpretation and reprocessing of data over Eneabba Deep in the immediate future, which will support an initial estimation of a potential resource size.”