Hydrogen Europe will precede this event in the same week on December 2-3, 2021 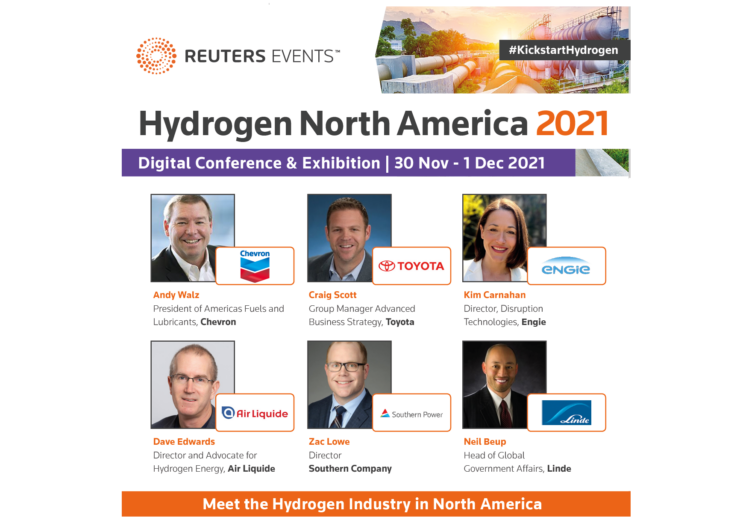 Reuters Events announced they are to launch Hydrogen North America (November 30th- December 1st, Online). Through monthly content and 2-day summit hosting 1,500 digital attendees, Reuters Events will provide hydrogen professionals the information and connections they need for expansion in North America. Hydrogen Europe will precede this event in the same week on December 2-3, 2021.

Understand the roadmap towards cost reduction for decarbonized hydrogen, how to de-risk deployment and ensure commercial viability of projects

Explore the steps involved in effective cost reduction, improving durability and distribution, both locally and internationally

4. The fundamental role of storage

5. End-use and tackling the demand issue

Find out about commercial viability of transportation and maritime application, as well as steps involved in decarbonizing aviation

“The North American hydrogen roadmap for the next ten years is ambitious. To support such important objectives, Hydrogen North America will connect the dots between all production, distribution, and application businesses, alongside policy makers and financiers. Now more than ever, we need to think big. That means large-scale projects, off-taker agreements and global trade to advance the hydrogen economy in North America.” – Diana Dropol, Project Director – Hydrogen North America, Reuters Events.

Join us at the end of November and register with the code LAUNCH150: https://reutersevents.com/events/hydrogen-north-america/register.php

North America is setting the perfect scene for a hydrogen economy of scale. With projections to help reach decarbonization goals being widely recognized, now is the time to define your role in the world of hydrogen.