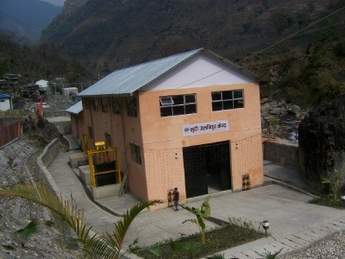 Khudi is a 4MW hydroelectric power plant built in a Nepali village by BPR (GCSCP) for Khudi Hydropower Ltd. The project’s history is as much a story of sustained efforts during the years, as the results of individual savings accumulated penny by penny over 10 years, as that of obtaining financing. Today, this perseverance has paid off: the first project of its kind in the country to have remained on budget, this project is now cited as a socially responsible development model.

Nepal is a country of 25 million inhabitants, but only 15% of them benefit from electricity. Despite having a hydroelectric potential of over 80,000MW, Nepal has developed less than 1% of this potential. Most people live in rural areas and they mainly resort to burning wood and residue for power and heat, creating environmental problems of vast deforestation, pollution and health issues.

Towards the end of the 1990s, Quebec consulting engineers BPR (then GCSCP), a company that specializes in small and medium-sized hydro power projects, obtained a mandate in Nepal. Engineer Francois Vitez of BPR became consultant to Mr. Dikendra Kandel, head of the Lamjung Electricity Development Company (LEDCO). LEDCO is a community-based developer of renewable energy with a socially responsible approach.

To design and build the Khudi plant, a consortium was created known as Khudi Hydropower Limited. It consisted of LEDCO (15%); Butwal Power Company (a Nepali hydro power consulting engineering company) (60%); and SCP Hydro International (25%). SCPHI is a Canadian Hydro Developer created by BPR (Then GCSCP). Khudi Hydropower Limited will operate the plant for 25 years.

To get the project off the ground, the consortium had to find additional financing, but the Nepali bankers were sceptical of such projects as there was no previous similar experience. These projects tended to leave very little benefits to the local communities and very limited transfer of knowledge to Nepalese once the work was completed. However, eventually, five Nepali banks agreed to lend the rest of the start-up funds.

From the start the challenge was to design, build and operate the power plant at the lowest possible cost without compromising performance. The dual relationship of being both colleagues and associated investors in the project united the participants behind these goals and allowed them to reach compromises. The second challenge consisted in avoiding scaling down the technology from large hydro to small hydro and ensure fail safe mechanism for such a remote plant. The third challenge was to build this project without any explosives as it was constructed during a civil war in Nepal when all use of explosive substances was illegal and heavily punishable. The final, and most complex, aspects of this project was river sedimentation and bedload management.

The design team adapted technologies from other sectors, including HYFRAN software from the National Institute of Scientific Research, Canadian technology for control systems as well as inversed siphon technology.

By simultaneously building both the power plant and transmission lines, normally under the responsibility of the State, the team was able to reduce the completion time by at least one month. The line was later handed over to the state owned utility.

The power plant operates with a flow of 5m3/sec, generates 4MW with a head of 96m, and produces 24.3GWh annually.

At present, the project is supplying electricity to Khudi, Besishahar, Dumre, and the national grid. The reliability of the local electrical distribution has been substantially improved.

The initial budget for the project was C$9M, this figure was further revised to $10M at financial closure. However, upon completion of the project, the cost of the power plant turned out to be lower than planned at $9.4 M.

Construction was scheduled to be completed in March 2002. However, Nepal at that time was faced with a period of great political instability, culminating in 2001 with the Royal Family being assassinated. Violence and fear then took over the entire country, which in turn affected financing partners and Nepali investors.

In March 2004, a revised schedule was produced. On 30 December 2006, 15 months after breaking ground, the power plant was commissioned. Compliance with this timeline is particularly remarkable as the work was carried out in a very mountainous region where the road infrastructures complicated supply and no explosives were used.

In embarking on such a project, the project team needed to satisfy three dictates (economic, environmental and social) commanded a priority by the competent Nepali authorities and supported jointly with CIDA (Canadian International Development Agency).

With regard to the economic aspect, the project had to be viable. The sale and distribution of energy would serve to reimburse the loan and generate long-term profitability. In 10 years, the KHL profitability threshold would be reached (15% of shareholders are small local investors). This project is now hailed by the various financial and governmental environments

With regard to the environmental aspect, one impact study carried out before work began led to the elaboration of an environmental management plan, whose implementation began in July 2007.

With regard to the social aspect, in cooperation with the CIDA and LEDCO as well as a non-profit organization in the district of Lamjung, COPPADES (Committee for the Promotion of Public Awareness and Development Studies), BPR designed a mitigation and social development plan which was both comprehensive and varied. Activities of this program included assistance to 26 schools in the area, construction of four new school buildings, micro-credit group and cooperatives, tradesmen training, biogas and toilet making training and implementation, health post creation, HIV-Aids education, etc. The hydro power project was the entry point from which these social enhancement measures have been able to be implemented and sustained. These programs are still operating after commissioning of the project.

The penstock which forms part of the Khudi project