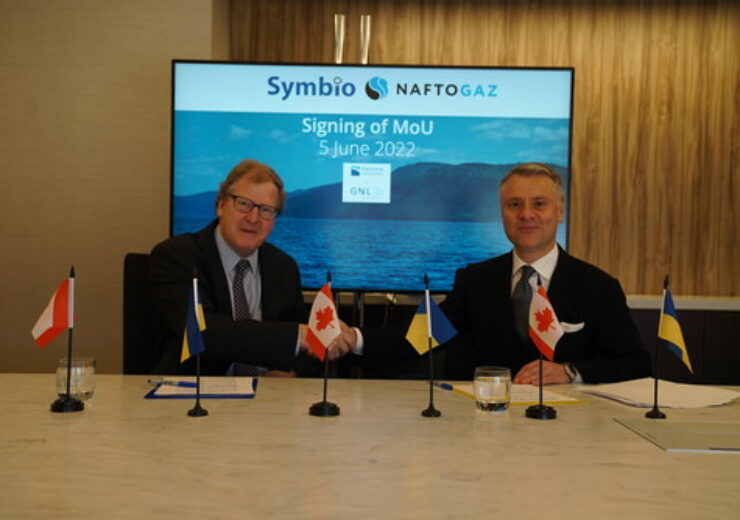 “This agreement is an important milestone on Ukraine’s path of transitioning to diverse supplies of energy from around the globe, which we began at the end of 2014, when we stopped the direct import of Russian natural gas. Since then, we’ve fortified our energy independence by being an active player in the European energy market. We believe opportunities for procuring reliable, responsibly produced long-term energy supply from allies like Canada – and from Symbio’s facilities – by 2027 is critical to our energy security, transition and future economic prosperity,” said Yuriy Vitrenko, CEO of Naftogaz Ukraine.
Jim Illich, Founder and Chairman of Symbio Infrastructure, said: “Energy from Symbio’s innovative, net-zero, hydropower-driven infrastructure will provide competitive energy to Ukraine and will significantly reduce global GHG emissions by displacing higher emission energy sources used in Europe, such as coal, heavy fuel oil, and higher carbon intensity sources of natural gas and LNG.”

The parties signed a Memorandum of Understanding (MoU) on June 5 in Washington, D.C. The parties intend that the LNG and LH2 will be delivered to an import terminal in a mutually agreed European transit country. Symbio will supply the world’s lowest carbon LNG to Europe thanks to Canada’s stringent regulatory standards for natural gas production and the innovative use of renewable hydroelectricity to power its facilities.

This MoU advances the stated ambition of the Canadian government, which has publicly confirmed its strong interest in helping Europe address its energy crisis and need for LNG supply diversification by fast-tracking relevant approvals to export natural gas from eastern Canada to Europe through ultra-low emissions LNG export facilities with the capability to export hydrogen in the future.

Naftogaz is the largest state-owned company in Ukraine, engaged in a full cycle of field exploration and development, production and exploration drilling, storage of oil and gas, processing and distribution of oil products, natural gas and liquefied gas to consumers. Naftogaz is committed to future generations, which is why one of its strategic goals is to build up “green” energy assets to enable the energy transformation of Naftogaz and de-carbonisation of the Ukrainian economy.

Symbio, through its subsidiary GNL Québec, is developing Énergie Saguenay, the world’s first large-scale, carbon-neutral liquefied natural gas (LNG) export facility in Quebec, Canada. The industry benchmark-setting facility will liquefy and export 10.5 million tons or 15 billion cubic metres (bcm)/year of clean LNG to Europe (roughly 17 % of Germany´s annual gas consumption or about half of Ukraine’s consumption) at competitive prices due to its short shipping distance to Europe and cost efficiencies gained from Canada’s cold climate.