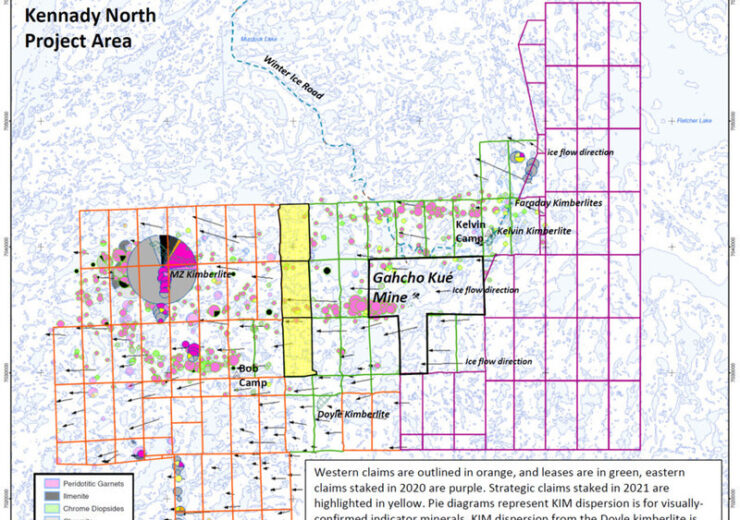 Mountain Province Diamonds Inc. (“Mountain Province”, the “Company”) (TSX: MPVD) (OTCQX: MPVD) today provides an update for its 100%-held Kennady North Project. Following staking in early 2020 that increased the Kennady North Project area by 35 percent, three additional claims have now been staked and filed with the government recorder for the Northwest Territories. These new claims are important to Mountain Province Diamonds as they are to the east of significant clusters of kimberlite indicator minerals, as well as the previously identified MZ Kimberlite, both of which require further review. Additionally, the three claims connect the Kennady North land package into one contiguous area which now includes 30 federal leases and 94 claims that total 107,373 hectares and completely surrounds the Gahcho Kué Mine. Mountain Province is a 49% participant with De Beers Canada in the Gahcho Kué diamond mine.

Mark Wall, the Company’s President and Chief Executive Officer, commented:
“The acquisition of these three claims is significant. Their omission from the Kennady North Project created logistical and exploration challenges in assessing indicator mineral and geophysical data both up- and down-ice of the claims. With these claims now a part of our portfolio, we can act decisively as we ramp up our exploration activities with the intention of finding and creating new mines in this highly prospective area.”

The three new claims became available for staking in October and were acquired last week in a helicopter-supported exercise that was based out of Yellowknife. The new claims are highlighted in yellow in the map image below.

Nearly continuous indicator trains are evident from the Faraday and Gahcho Kué kimberlite fields, but there is also a strong dispersion train located just north of the Bob Camp for which the up-ice kimberlite sources are unresolved. As part of the 2022 program, resistivity surveys using the new ARRT technology will be conducted at the up-ice termination of this indicator mineral train.

As described in the September 13 news release, the new ARRT resistivity technology is a proprietary capacitive-coupled resistivity system developed by Aurora Geoscience that provides greater resolution and depth penetration over potential kimberlite targets compared to historical OhmMapper technology. In winter 2021 an ARRT survey was completed adjacent to the Faraday kimberlites and two anomalies were identified. New 3D interpretations for the North and South Anomalies have been updated with images that are provided below.

The Faraday kimberlites are shown in gray; resistivity contrasts around the kimberlites are shown in reds. The ARRT results highlight the physical contrast between the broken and altered country rock immediately adjacent to the Faraday kimberlites, and the unaltered, unbroken country rock further away from the kimberlites. The ARRT signature that envelops the Faraday 2 kimberlite is nearly identical to the ARRT signature that defines the South Anomaly. Also shown on the image are historical drill traces with minor intersects of kimberlite highlighted in green. It is evident that historical drilling did not test the newly-identified South Anomaly.

The winter 2022 exploration program will include up to 2,000 meters of exploration drilling on the North and South Anomalies and additional ARRT surveys over the Bob Camp area and other areas of interest. The winter program is planned to start in Q1 of 2022.