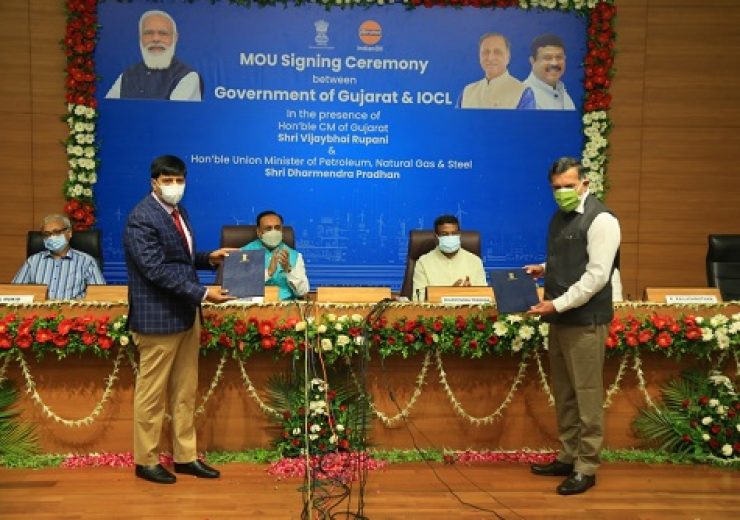 The Chief Minister of Gujarat, Shri Vijaybhai Rupani and Union Minister of Petroleum and Natural Gas & Steel, Shri Dharmendra Pradhan, today presided over an MOU signing ceremony for “Investment Promotion” between the Government of Gujarat and IndianOil for setting up a Petrochemical and Lube Integration (LuPech) Project and Acrylics / Oxo Alcohol Project along with other infrastructure projects at its Gujarat Refinery at Vadodara.

These projects will strengthen the Corporation’s readiness for venturing into petrochemical projects like PVC, Styrene, Acrylonitrile, Poly-Methyl Methacrylate and Ethylene Oxide in future. The Petrochemicals & Specialty products (Gr-II/III LOBS) integration index based on additional crude oil added under this project is estimated to be 20.7%.

During his address, Chief Minister Shri Vijaybhai Rupani mentioned that Gujarat is a leading State in the field of Oil and Petrochemicals. The Chief Minister said that “As a result of the transparent policies, acceleration of ‘Ease of Doing Business’ and favourable environment for industries, Gujarat, in spite of the covid pandemic has for the fourth year in a row, maintained its number one position as the highest recipient of FDI in the country”.

Giving further details during the MOU function, Chairman IndianOil Shri SM Vaidya said, “Today Gujarat is charting a new path of prosperity. To power that journey, IndianOil’s Gujarat Refinery is now poised to grow to 18 MMTPA capacity. New units for the production of Polypropylene, Butyl Acrylate and Lube Oil Base stocks will also be added to the Refinery’s portfolio”.

These projects will enable large-scale direct and indirect employment opportunity during the peak construction period and later for the operation of these facilities. During the construction stage, around 125 million person-hours of employment will be generated. The total investment outlook for these projects in different execution stages is approximately Rs 24,000 crore.