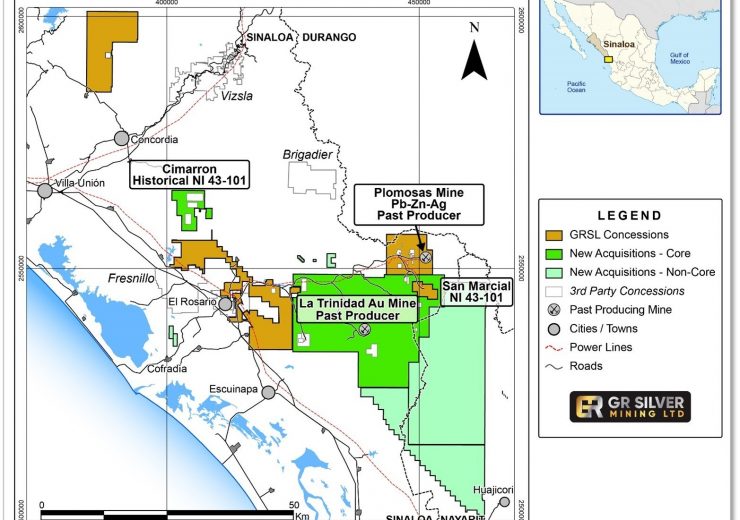 The acquisition of Marlin is the third significant transaction completed by GR Silver Mining since listing on the TSX-V in March 2018. In accordance with the Company’s long-term strategy, GR Silver Mining now controls two past-producing mines (Plomosas and La Trinidad) that are fully permitted for future production, a current resource at San Marcial, as well as the most prospective Ag-Au exploration ground in the Rosario Mining District. This is the first time in modern history that one company has held all of these key assets under single ownership, whereas previously each had been controlled by separate companies. GR Silver Mining continues to achieve significant corporate milestones and to deliver on its stated objective to continue to add shareholder value.

Advanced Targets
The main exploration focus on the 12 Marlin concessions has historically been on La Trinidad (Taunus Pit) which produced over 164,000 oz of gold1,2,3 until its closure in 2019. Another advanced stage project within the acquired portfolio is the Cimarron Project, located to the NW of La Trinidad (Figure 1). A number of targets have been identified at Cimarron including Calerita, El Prado, Huanacaxtle, Betty and Veteranos. The Calerita gold-(copper) deposit at Cimarron, is the only target to have been drilled to date, and represents an intrusive related gold deposit for which Marlin released a historical gold resource estimate in 20114 (refer to details in the ‘About GR Silver Mining Ltd.’ section of this current News Release).

Exploration Prospectivity
Extensive regional geochemical datasets were compiled by Oro Gold covering a large portion of the concessions with over 700 stream sediment samples, 500 rock and channel samples5, as well as over 9,000 soil samples1. Key exploration targets that were generated and initially drilled are aligned along one of three highly prospective NW-SE trending corridors, with this 12 km long section connecting the Taunus Pit with the San Carlos, Colinas, San Miguel, Guayabo and San Cristobal targets (Figure 2). A total of 40,500 m of diamond, RC and sonic drilling were completed by Oro Gold. This extensive drill database will be incorporated into GR Silver Mining’s growing regional database to further advance the Company’s exploration model. The La Trinidad concessions together with the Cimarron concession (“core concessions”) represent areas for future exploration in the Rosario Mining District.

GR Silver Mining owns 100% of the Plomosas Silver Project located near the historic mining village of La Rastra, within the Rosario Mining District. The Project is a past-producing asset where only one mine, the Plomosas silver-gold-lead-zinc underground mine, operated a 600 tpd crush milling flotation circuit from 1986 to 2001, producing approximately 8 million ounces of silver, 73 million pounds of lead and 28 million pounds of zinc.

The Project has an 8,515-hectare property position and is strategically located within 5 km of the Company’s San Marcial Silver Project in the southeast of Sinaloa State, Mexico.

The March 2020 acquisition of the Plomosas Silver Project included 563 historical and recent drill holes from both surface and underground locations. These drill holes represent an extensive database allowing the Company to advance towards resource estimation and potential project development in the near future.

The Company is carrying out a drilling program with surface holes focused on expanding known mineralization along strike in two initial areas, the Plomosas Mine Area and the San Juan Area. Underground drilling included in the program will target the extension of recent Au-rich discoveries at the lowest level (775 m RL, or ~250 m below surface) of the Plomosas Mine Area and six low sulphidation epithermal veins at the San Juan Area. Both areas will be the subject of NI 43-101 resource estimations following completion of this drill program.

The silver-gold mineralization on this Project displays the alteration, textures, mineralogy and deposit geometry characteristics of a low sulphidation epithermal silver-gold-base metal mineralized vein/breccia system. Previous exploration was focused on polymetallic (Pb-Zn-Ag-Au) shallow mineralization, hosted in NW-SE structures in the vicinity of the Plomosas mine. The E-W portion of the mineralization and extensions of the main N-S Plomosas Fault remain under-explored.

In addition to the resource potential at Plomosas, a review of the existing drill hole database, geophysical surveys and geochemical data covering most of the concession, has defined 16 new exploration targets from which 11 have high priority for future exploration programs.