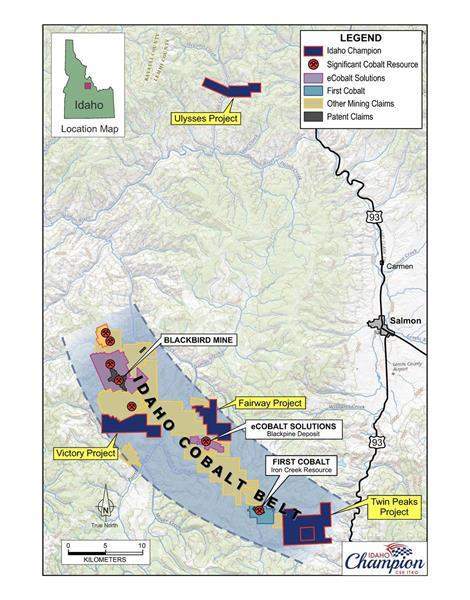 The Company believes that the Idaho Cobalt Belt represents the premier district for primary Cobalt discoveries in North America. The region hosts a rich endowment of mineral resources only beginning to be unlocked due to recent exploration activity driven by the price of Cobalt. Modern exploration techniques have proven fruitful in expanding historic resources and making new discoveries.

The four projects are summarized as follows:

The DUP Claims, located 6 km south of the Blackbird Mine, sit adjacent to, on-trend and immediately south of International Cobalt’s Blackbird Creek Project.  Three copper-cobalt occurrences exist on the project; the French Gulch Mine, Victory, and Dupuis.

The SC Claims are located one km north of eCobalt’s Blackpine copper-cobalt Project. The SC Project is host to stratiform sulphide mineralization found in massive sections which typically contain pyrite and chalcopyrite. Aside from the copper rich strata, there are several narrower cobalt-gold rich arsenopyrite-bearing beds present in the copper mineralized section.

The TP claims are host to the Twin Peaks Copper mine and are surrounded by the Badger claims located in Badger Basin.  The historical Twin Peaks mine has been described as having broad shear zones of modest grade copper mineralization.

The IP and GS Claims are 2 km north of the Ulysses Mine, a historical gold/silver producer located in the Yellowjacket Formation which is associated with Cobalt mineralization in the Region.

Two Cobalt occurrences have already been identified south of the Ulysses Project, which attest to the prospective nature of this area.  The Yellowjacket Formation in this area is located outside of the prolific “Idaho Cobalt Belt” but is interpreted to have similar geological potential to host cobalt-copper-gold mineralization.

Idaho Champion has received notice from American Cobalt (seller) and the Bureau of Land Management (BLM) that the claims have been registered to Idaho Champion Cobalt USA, a 100% owned subsidiary of Idaho Champion Gold Mines Canada Inc.