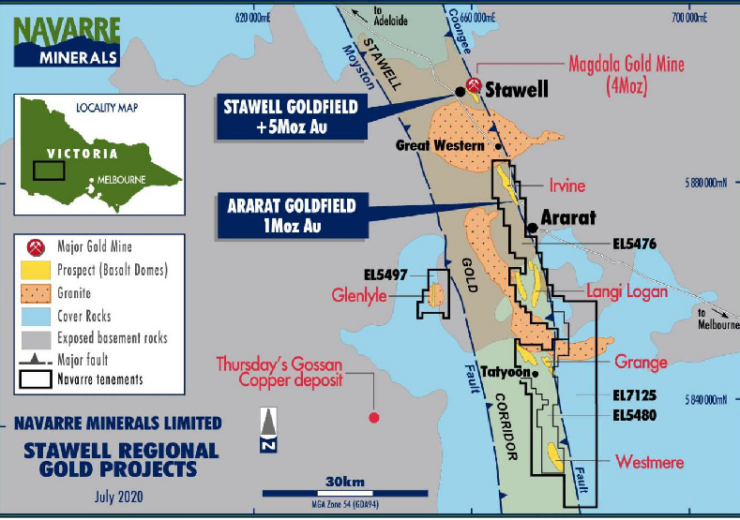 Funding of the research project was supported by a grant from the Australian Government’s Department of Industry, Innovation and Science through the Innovation Connections scheme of the Entrepreneurs’ Programme, with the remaining funding provided by Navarre.

Magdala’s gold mineralisation is believed to have resulted from periods of high fluid flow during episodes of high strain.

The research has identified several new target areas prospective for gold mineralisation at our Irvine and Langi Logan basalt dome prospects which we are planning to drill test.”

The aim of the research was to reduce the search space by predicting areas of potential concealed gold mineralisation for direct drill testing.

A modelled principal compression direction of SSE-NNW was found to be the most consistent orientation for mineralisation to form in the position of Resolution Lode, which is important given the geometry of the basalt is more constrained by drilling in this area. Resolution Lode occurs at the northern tapered end of the Irvine basalt dome.

Modelling under a range of compression directions, specifically E-W and SSE-NNW, is predicting an additional target on the western flank of the Irvine dome where there has been limited previous shallow drilling. This area will be investigated with a view to drill testing in the coming months.

Modelling of the basalt bodies in the Langi Logan area show that varying the basalt dome shape and its orientation can have a significant effect on the locations of increased dilation and fluid flow. Generally, the findings are similar for the Irvine basalt, where the plunging ends and moderately dipping flanks of the domes account for the areas of highest dilation most prospective for gold mineralisation. As the plunge of dome is normally north or south, SSE-NNW directed deformation allows for these areas to deform and dilate the most.

The northern end of the Langi Logan basalt dome and the northwest flank, specifically, will be targeted in an air-core drilling program planned to commence in early October. The NW flank of the Langi Logan North basalt dome is located under shallow cover and presents the earliest opportunity to test the CSIRO models.

Navarre considers there is significant potential to apply computer simulation not only for high-grade gold mineralisation at depth at Irvine and Langi Logan but also for the five other basalt dome targets yet to be appraised within the Stawell Corridor Gold Project. This is another example of Navarre’s innovative approach in reducing the time and cost of exploration by minimising ground disturbance with smart geology and targeted drilling.

Innovation Connections is part of the Australian Government’s Department of Industry, Innovation and Science Entrepreneurs’ Programme aimed to drive business growth and competitiveness by supporting business improvement and research collaboration in targeted growth sectors. CSIRO has a history and track record of innovation working with the gold sector.