Ferrybridge is less than 35 miles from Keadby in North Lincolnshire, where SSE is working to replace coal and other carbon-intensive forms of power generation with flexible, low-carbon alternatives 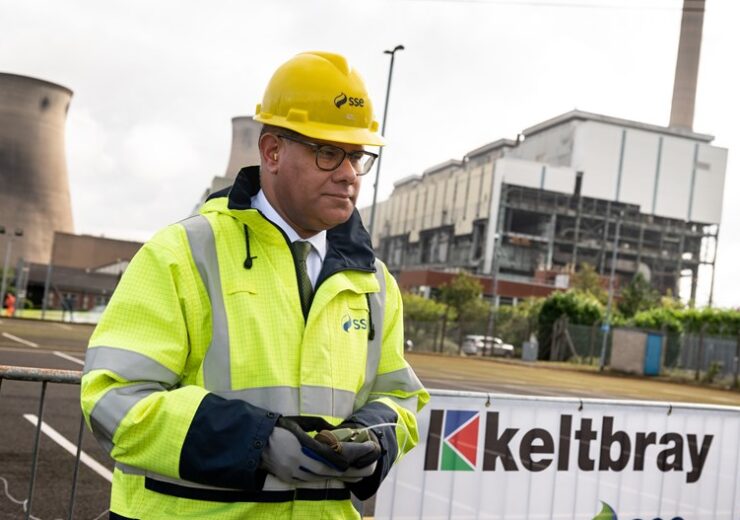 With just 70 days to go until the landmark climate change summit in Glasgow, COP26 President Alok Sharma took the opportunity to experience the North of England’s energy transition up close on Sunday.

In a hugely symbolic moment ahead of the major climate summit, just weeks after the IPCC issued a ‘code red’ warning to humanity on the urgent need to decarbonise, the COP President Designate hit the detonator button at SSE’s former Ferrybridge Power Station near Leeds, marking a milestone moment in the global movement to ‘power past coal’, and a poignant moment for the local community.

The blowdown saw the removal of the two 200-metre chimney stacks from the West Yorkshire skyline, as well as the boiler house, a tangible sign of the energy transition in the region. SSE, a Principal Partner for COP26, closed the former coal-fired power station at Ferrybridge in 2016, having produced electricity at the site for over 50 years. In June, the UK Government announced that Great Britain will no longer use coal for energy generation from October 2024, a year earlier than previously planned.

Ferrybridge is less than 35 miles from Keadby in North Lincolnshire, where SSE is working to replace coal and other carbon-intensive forms of power generation with flexible, low-carbon alternatives. SSE is progressing plans with Equinor for one of the UK’s first power stations equipped with carbon capture technology at the site by 2027, as well as the world’s first major 100%-hydrogen fired power station by the end of the decade. The plan is to locate these power stations on the same site as SSE’s under-construction Keadby 2, which uses technology already capable of blending low-carbon hydrogen and will be Europe’s most efficient power station.

As part of his visit, the COP President met with SSE employees who have transitioned from Ferrybridge to Keadby and those working on new low-carbon technologies, applying their skills and knowledge to the power stations of the future. Combined with the nearby Keadby Wind Farm and Dogger Bank, the world’s largest offshore wind farm being built off the east coast, SSE’s projects and assets in the North of England represent a microcosm of the future energy system, with low-carbon thermal power backing up large-scale renewable generation.

The COP President also met SSE apprentices working at Aldbrough Gas Storage facility in East Yorkshire, where SSE and Equinor are also developing plans to create one of the world’s largest hydrogen storage facilities. Hydrogen storage will be vital to reaching the UK’s net zero goals, as outlined by the UK Government in its first-ever Hydrogen Strategy, which was published last week.

SSE’s power stations at Keadby would be key early customers for the shared carbon capture and storage (CCS) and hydrogen infrastructure being developed through the proposed East Coast Cluster, supported by hydrogen storage at Aldbrough. By deploying CCS and hydrogen pipelines in the Humber and Teesside, the East Coast Cluster has the potential to abate 27 million tonnes of CO2 annually by 2030, while supporting an average of 25,000 low-carbon jobs each year out to 2050.

SSE’s principal contractor Keltbray carried out the blowdown using controlled explosives, with a 250-metre exclusion zone being put in place to ensure safety. In addition, nearby homes were evacuated for a short time on the Sunday morning with SSE and Keltbray engaging with residents throughout.

Alok Sharma – COP26 president-designate said: “It is time for countries to set out clear plans to consign coal power to the history books and safeguard our planet for future generations. The UK is moving fast towards a clean energy transition and the many new jobs in renewables, like those being created by SSE, demonstrate how many opportunities there are in our green industrial revolution.”

“Pressing the button on this demolition is a symbolic moment for me and demonstrates that change is possible. But to limit global temperature rises and keep 1.5C within reach, the whole world needs to plan to consign coal power to the past.”

SSE Group Energy and Commercial Director, Martin Pibworth, said: “As the UK continues to lead the way in powering past coal, it’s crucial we’re investing in low-carbon alternatives to provide the flexible power generation needed to continue to enable a renewables-led energy system. At Keadby, we’re developing cutting-edge CCS and hydrogen solutions to address this underlying challenge, while also supporting the decarbonisation of heavy industry and other hard-to-reach sectors across the region.

“As a Principal Partner to COP26, SSE believes there is a clear opportunity for the UK to demonstrate global leadership on CCS and hydrogen technologies, as we have done with offshore wind, delivering the solutions needed for a secure, cost-effective and just transition to a net zero economy. The journey we’ve been on from coal to clean energy is one that must be replicated urgently the world over if we are to heed scientists’ warnings and limit global warming to 1.5 degrees. We hope other nations will take this as a signal of what can be achieved if the right level of commitment and policies are put in place.”