AFD, EIB, the EU and Kenya join forces to improve access to water and sanitation in Kisumu 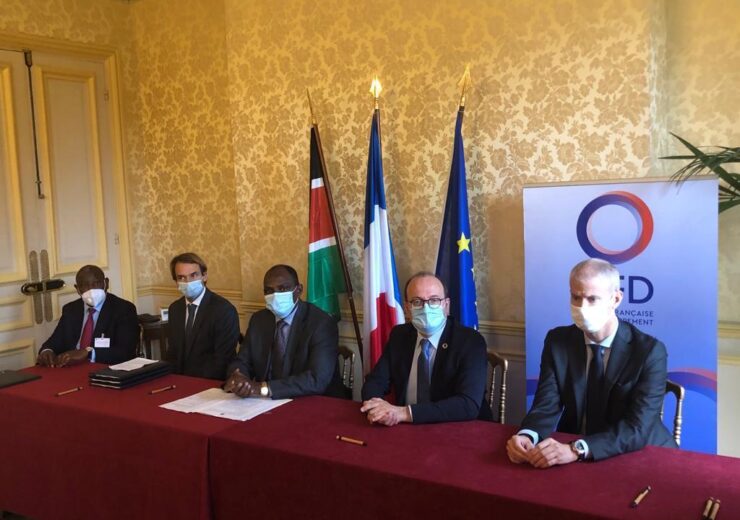 On the sidelines of the visit to France of the President of the Republic of Kenya, H.E. Mr. Uhuru KENYATTA on October 2, financing agreements for the Lake Victoria Water and Sanitation Project (LVWATSAN), a project which aims to improve access to Water and Sanitation in Kisumu, were signed.

The agreements were signed by Rémy RIOUX, CEO of Agence Française de Développement (AFD), Grégoire CHAUVIÈRE LE DRIAN, Head of the European Investment Bank Group Office in France and Ukur YATANI, Cabinet Secretary for the National Treasury of the Government of Kenya.

A representative of the European Union also a co-financier of the project and French Minister Delegate in charge of Foreign Trade, Mr. Franck RIESTER, witnessed the signing ceremony.

The signing of the agreements will pave the way for the implementation of the LVWATSAN, which is financed with a EUR 20 million concessional loan from AFD, a EUR 35 million concessional loan from the European Investment Bank (EIB) and a EUR 5 million grant from the European Union. The Government of Kenya will also provide counterpart financing to the project amounting to EUR 10 million.

The project will expand the water and sanitation distribution network in Kisumu, including to informal settlements and expand water supply to the satellite towns of Ahero and Maseno. Additionally, there will be a component for water quality monitoring for Lake Victoria, aimed at protecting this shared regional water resource and also ensure that the water treatment process is more efficient. The project will be implemented by the Lake Victoria South Water Works Development Agency (LVSWWDA).

In Kenya’s third largest city Kisumu, the close proximity of Lake Victoria does not automatically ensure access to clean water for the 800,000 residents. The Lake currently experiences significant levels of pollution owing to the inadequacy of sanitation infrastructure. Since 2005, AFD has financed the rehabilitation and expansion of water supply and sanitation infrastructure in the city, which greatly augmented Kisumu’s water production capacity and resulted in Kisumu being one of the few cities in the country that can provide those connected to the water network, with access to clean water 24 hours a day / 7 days a week.

Prior to AFD’s involvement in the sector in Kisumu, about 50% of the population had no access to running water, with most people purchasing water of poor quality and at a high cost from water vendors. At the time, only 8% of the residents benefited from a continuous water supply. The presence of an urban area on the shores of the Lake means that there is a higher risk of pollution and this will be addressed through the planned construction of a new wastewater treatment plant.

The city’s water and sanitation network will now benefit from significant extension thanks to this new financing from the AFD, EIB and EU, and thus help cover for the population’s needs until 2030.

“As the first bilateral financier of the water and sanitation sector in Kenya, with commitments standing at approximately 600 M EUR over the past 20 years, AFD is proud to improve access to safe drinking water for the population of Kisumu while protecting this scarce resource through enhanced quality monitoring – in other words, to contribute to the Sustainable Development Goals by helping the people and protecting the planet. Thousands of Kenyans living on the shores of Lake Victoria will benefit from the financial support of AFD which has granted a EUR 20M concessional loan as part of a Team Europe effort that will further reinforce the positive social and environmental impacts of this impressive water project,” AFD CEO Rémy Rioux said.

“Thousands of Kenyans living on the shores of Lake Victoria will benefit from transformed access to clean water and improved sanitation following the excellent cooperation between Kenya, AFD, the EIB and the European Union. This impressive water project will contribute to improved health, reduced infant mortality and address poverty in communities faced by a changing climate and strengthen efforts to fight COVID-19. As the EU Bank the EIB is pleased to provide EUR 35 million long term financing for this project and to contribute environmental and social technical expertise. The Lake Victoria water and sanitation scheme has been developed under the Mutual Reliance Initiative with AFD leading international partners and ensuing reducing the burden of administrative procedures. We also welcome the support of the European Union for a project that shows how Team Europe and Kenya are working hand in hand to improve lives.” said Ambroise FAYOLLE, European Investment Bank Vice President.