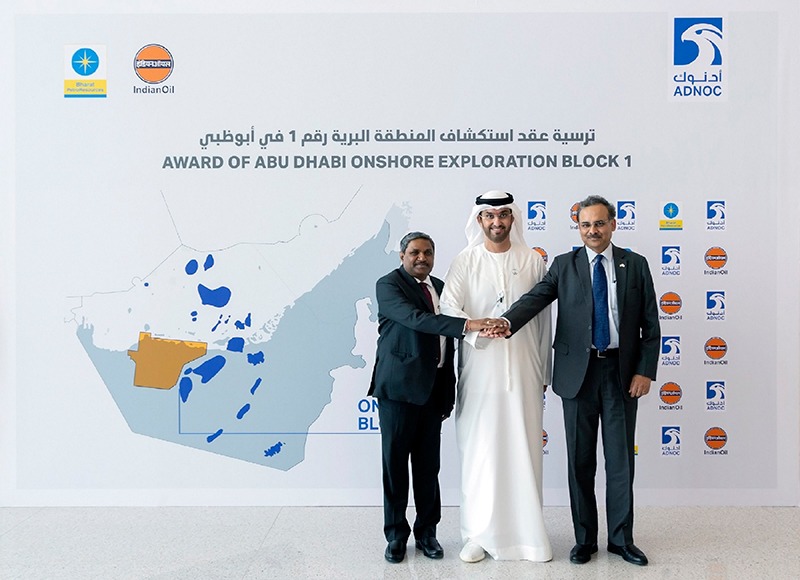 The two Indian oil companies, which will have a 100% stake in the exploration phase of the Abu Dhabi Onshore Block 1, have agreed to invest up to AED626m ($170m). The amount will cover the participation fee and the investment for exploration and appraisal of oil and gas opportunities within the block.

The concession agreement has a term of 35 years.

Bharat Petroleum and Indian Oil will get the opportunity to develop and produce any discoveries subject to successful exploration activities and appraisal of the existing discoveries. In such a case, ADNOC will have the option to have a 60% stake in the production phase.

Indian Oil chairman Sanjiv Singh said: “We are delighted to be chosen by ADNOC to participate in this project, which will strengthen our efforts to achieve India’s energy security. It is the second time that Indian oil and gas companies would venture into the development of hydrocarbon resources in the UAE, after acquiring stakes in Abu Dhabi’s Lower Zakum Concession.”

The Abu Dhabi Onshore Block 1 is spread over an area of 6,162km2, and is located in the Al Dhafra region. The block contains two existing undeveloped oil and gas fields in the form of Ruwais and Mirfa, which are planned to be appraised by the Indian consortium.

The awarded Onshore Block 1 will specifically pursue the conventional oil and gas opportunities in the area. The block also covers the Ruwais Diyab Unconventional Gas Concession, which is considered as a separate project.

ADNOC Group CEO Sultan Ahmed Al Jaber said: “The consortium of Bharat Petroleum Corporation and Indian Oil Corporation, both of whom ADNOC already partners with offshore, was selected after a very competitive bid round.

“The open bidding process represents a major advance in how ADNOC is accelerating the exploration and development of Abu Dhabi’s substantial untapped hydrocarbon resources as we continue to maximize value, in line with the UAE leadership’s directives.”

The award of Abu Dhabi Onshore Block 1 completes the emirate’s first-ever competitive block bid round for the geographical areas offered initially in April 2018. Offshore Blocks 1 and 2 were granted to a consortium featuring Eni and PTT Exploration and Production, Onshore Block 3 was awarded to Occidental Petroleum while recently, Onshore Block 4 was given to INPEX.