Concerns over the long-term stability of bituminised radioactive waste have prompted NUKEM to establish a programme that can treat the waste using a pyrolysis process. Having established a lab-scale facility, plans for a full-scale demonstrator are underway, write Rainer Slametschka, Director Center of Competences at NUKEM Technologies Engineering Services GmbH and Stefan Thiel, Research Assistant, Technische Universität Bergakademie Freiberg 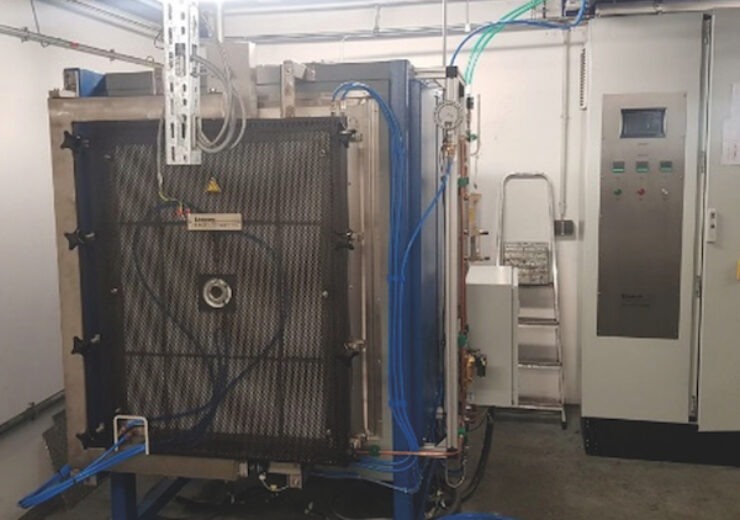 The lab-scale furnace as installed

Bitumen was seen as a long-lasting material providing a safe enclosure for radioactive substances and good stability for the anticipated long-term storage and disposal. However, tests in France have shown that, over time, radiolysis can occur, causing the formation of gas bubbles within the bitumen matrix. This leads to acceptance problems in underground repositories due to the risk of fire as well as the lack of long-term stability.

Due to the characteristics of the bitumen matrix reconditioning of these waste packages present significant challenges, including the large volumes of bituminised waste, their high calorific value, the content of volatile radionuclides, the difficulties handling molten bitumen and the potential spread of contamination.

So far, no direct reconditioning process has been commercially established for bituminised waste packages. It has been suggested that the bitumen could be co-incinerated at existing facilities, but that would require the removal of the bitumen from the waste package prior to treatment. Additionally, that would still leave the original waste packages, having significant amounts of bitumen and radioactive material left inside, to be handled and treated somewhere.

However, based on experience with the pyrolysis and pyrohydrolysis process which was developed by NUKEM Technologies Engineering Services GmbH (NUKEM) and has operated successfully for decades, NUKEM decided to investigate its applicability for other waste types like a bituminised waste.

A typical application for this pyrohydrolysis process is the decomposition of consumed extractant tributyl phosphate (TBP) in a mixture with kerosene. In this case, TBP is pyrolyzed together with calcium hydroxide in a stirred bed system at temperatures around 500°C. The calcium hydroxide converts directly with the phosphate groups to calcium pyrophosphate, which contains all the radioactivity and is disposed of as intermediate-level waste. The organic components pass into the pyrolysis gas, which is burned. The flue gas is further purified.

TBP pyrolysis plants were built in France at La Hague, in Belgium at Mol and in Japan at Rokkashomura. The Belgian plant has now ceased operations as all the TBP from EUROCHEMIC’s operations has been successfully processed. The plant in Japan is currently in the testing phase.

At the existing plants, as well as in corresponding pilot plants, multiple tests were carried out in order to expand the range of waste that can be processed in this way. Initial tests have shown that spent ion exchange resins (IEX) can also be decomposed with very good results by pyrolysis, resulting in an inert and chemically resistant product. The pyrolysate is produced as a free-flowing solid and not as a melt. It is therefore easy to handle and can be pressed or cemented depending on the interim and final storage conditions and activity inventory.

Any other ingredients such as inorganic filter aids or other organic substances do not interfere with the process flow, they are dried, calcined or also pyrolyzed. Gaseous products including hydrocarbons such as methane or propene, water vapour and, in small quantities, ammonia are part of the pyrolysis gas. This gas must be burned before being fed to an off-gas cleaning system equipped with HEPA filters.

The pyrolysis process showed volume reduction factors (VRF) of about 7 for a typical mixture of spent ion exchange resins. The addition of steam to the stirred bed reactor could increase this VRF to 20.

NUKEM together with DBI-Virtuhcon had already demonstrated the ‘in-principle’ suitability of pyrohydrolysis for the treatment of bituminised waste packed in whole drums during testing at the University of Freiberg.

From the results of these laboratory tests, a concept for the treatment of drums containing bituminised radioactive waste was developed and NUKEM set up an R&D project. This project supported the implementation of a pyrolysis process at an industrial scale. The first step saw a laboratory-scale facility processing up to 20 kg of bitumen. A second step will establish a demonstrator unit able to treat a 200-litre drum in order to gain a full understanding of the pyrohydrolysis process involved in the treatment of a bitumen matrix. In its final stage, the demonstrator unit should prove the process using real radioactive bituminised waste.

It is assessed that the Technical Readiness Level (TRL) based on US DoD and EC assessment system was TRL3 prior to the start of the R&D programme. When the lab-scale development is successfully completed the TRL will be increased to TRL5 and after completion of the full demonstrator work, TRL7 should be achieved.

In 2020 NUKEM launched its R&D project, starting with the design and procurement of the lab-scale furnace able to process 30-litre drums containing simulated bituminised waste. At the beginning of 2021, the furnace was delivered to DBI Virtuhcon and successfully installed and commissioned.

Parallel to the works on the lab-scale facility, drain tests using a 400 ml canister filled with pure bitumen were executed, in order to investigate the behaviour of bitumen and to simulate the necessary pre-treatment step for the proposed co-incineration process. These results will serve to benchmark the pyrohydrolysis approach.

After the successful installation and commissioning of the lab-scale furnace, the first tests were performed using pure bitumen in 30-litre stainless steel drums containing between 10 and 20 kg. The value of 20 kg was chosen because the remaining volume will be used in the next step for the addition of salt, ion exchange resins or metal, simulating radioactive waste embedded into the bitumen matrix.

In the first phase of the lab-scale furnace test programme, ‘approach tests’ were executed to determine the best temperature profile and to gather data on the behaviour of the bitumen in larger volumes. Although the bitumen was mainly decomposed during the pyrohydrolysis process, at the bottom and on the surfaces of the 30-litre drum some powdery residue nevertheless remained after the treatment. In addition, residues on the outside of the drum dust could be seen, which had been deposited during the pyrohydrolysis process itself.

By adjusting the temperature profile as well as the amount of steam used within the process the deposits could be removed completely. However, the tests showed that part of the drained bitumen, which is collected in a drip tray below the 30-litre drum, still remained.

The test programme will continue in 2022 by adjusting the steam flow to further reduce the remains in the drip tray. In the meantime, 30-litre drums were filled with salt or ion exchange resins embedded in a bitumen matrix to simulate bituminised radioactive waste packages.

Selection criteria for the site include:

Bituminised radioactive waste seems to be at least partly excluded from disposal at deep geological repositories. Owners of these waste packages are therefore seeking alternatives to re-conditioning of these waste materials. Most of the established methods require the pre-treatment of the waste package – draining the bitumen from the packages – as the downstream processes are not capable of treating the complete waste packages. When draining bitumen prior to treatment significant amounts of bitumen remain in the waste package which will also contain radioactive materials from the original embedded radwaste. Due to the properties of the bitumen, such as its viscous and sticky characteristics, further handling of the drained waste packages within glove boxes is required. This forms another problematic step in the treatment of bituminised waste packages.

The pyrohydrolysis process seems to be a promising technology to safely reprocess complete waste packages with bituminised radioactive waste without the need for draining first. The first test with 20 kg bitumen treated in a lab-scale furnace showed very good results in mass/volume reduction. After further optimising operational parameters, such as steam and temperature profile, the already high mass/volume reduction should be further increased. The next phase will be to develop a full-scale demonstrator to prove the reliable operation of the pyrohydrolysis facility for bituminised radioactive waste and target TRL 7. Other targets of the demonstrator unit include producing a reliable set of operational and design parameters enabling precise calculation of investment and operational cost of an industrial-scale facility.