Polymetallic nodules found on the deep-sea floor may be the key to manufacturing the low-carbon technologies needed to generate clean energy. 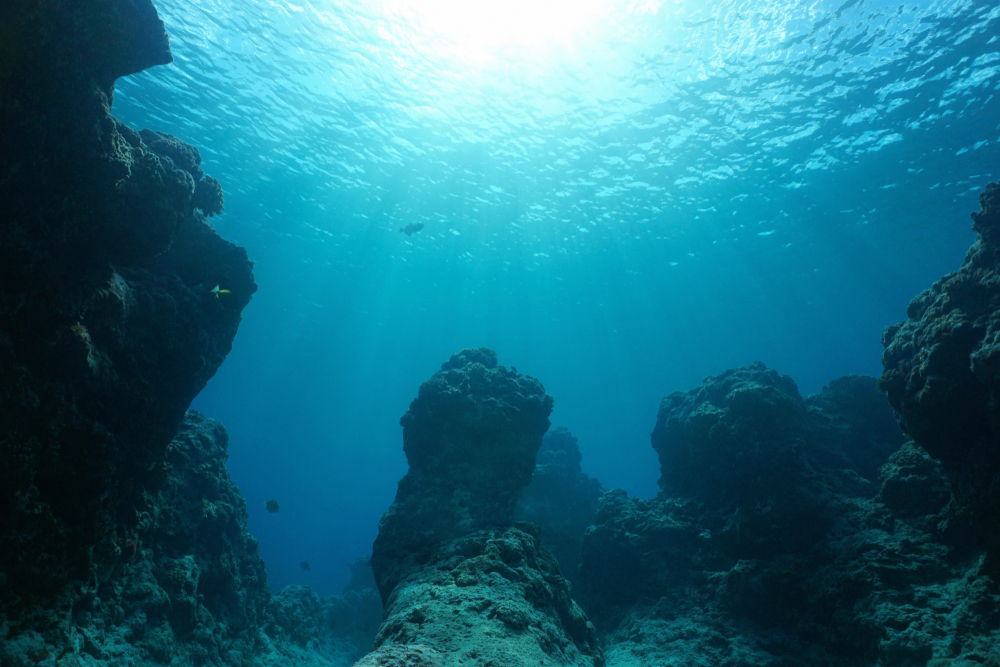 The deep-sea floor is home to billions of tonnes of polymetallic nodules, which contain metals that are key to manufacturing the low-carbon technologies needed to generate clean energy. Elly Earls speaks to Gerard Barron, CEO of The Metals Company, and Benjamin ‘Pietro’ Filardo, founder and CEO of Pliant Energy Systems, about how these deposits can be collected with the greatest efficiency and the lowest impact on the environment.

It’s often said that we, as a species, know more about the surface of the moon than we do about the depths of our oceans. But for both mining experts and marine researchers this can be a frustrating generalisation, as there are parts of the deep-sea floor that we’re very well informed about.

Take the abyssal plains in the Clarion-Clipperton Zone (CCZ), a geological submarine fracture zone of the Pacific Ocean. Lying unattached on the ocean floor are billions of tonnes of polymetallic nodules – potato-sized deposits containing rich concentrations of cobalt, nickel, copper and manganese – which were discovered in the 1870s.

Scientists have been studying them since the 1960s and we now have high-resolution bathymetric survey data covering hundreds of thousands of square kilometres of ocean floor.

The Metals Company (formerly known as DeepGreen Metals) plans to collect and produce metals from these nodules – the resource that it alone has so far managed to define – across two of its three separate licence areas.

According to the company, the nodules contain 1.6 billion tonnes worth of deposits; that’s enough to build at least 280 million 75KW electric vehicle batteries, a market that is growing exponentially as the planet drives, at speed, towards decarbonisation.

The metals found in polymetallic nodules are also key to manufacturing low-carbon technologies to generate clean energy, as well as the necessary infrastructure to transmit this power around the world.

A World Bank report in 2020 found that the production of minerals like cobalt could increase by nearly 500% by 2050 to meet the growing demand for clean energy technologies. Over three billion tonnes of them will be needed to deploy the wind, solar and geothermal power, as well as energy storage, required for a future with no more than a 2°C temperature increase.

The quantity of these metals in circulation also needs to increase significantly to make the circular economy possible, given the lack of available material for recycling.

The Metals Company CEO Gerard Barron argues that collecting these deposits from the ocean floor is far less impactful than many existing mining practices on land. “In Indonesia, the number one nickel-producing country, there is between 20–30kg of biomass per square metre. Whereas the CCZ is the biggest desert on planet Earth; it just happens to be 4,000m underwater,” he says.

“If we had our time again and if we were to take a planetary perspective, we would carry out extractive industries in the parts of the planet where there is the least life, not the most life.”

However, deep-sea mining has been a contentious issue in recent years. Environmentalists argue we don’t have enough information to make that claim yet. In April, Greenpeace activists protested against The Metals Company’s current research study in the Pacific, holding banners reading ‘Stop Deep Sea Mining!’.

They said that the deep ocean is one of the planet’s least understood and least explored ecosystems, which is home to significant biodiversity and acts as a vital carbon sink.

Barron doesn’t entirely disagree. “I totally understand why environmentally-concerned people want to take a ‘wait a moment’ approach,” he says.

“I did the same. But the window for combatting climate change is very narrow, and we must look to the data and science to provide us with the answers as to where the lowest-impact sources of these metals are found.”

The Metals Company is committing more than $75m to its environmental impact study. “We have to understand the impacts and how we can mitigate [them],” Barron says. “It’s only then that you can compare it against the known impacts of land mining and answer the question: which one do we want? There is no perfect solution. You can’t say we want to stop relying on fossil fuels and move to greener technologies unless you face the fact that you need to build a lot of batteries. And to build the batteries, we will need mountains of these metals.”

Another argument The Metals Company and others like it make is that the mining – or as they prefer to term it, collection – of these nodules can be done in a less invasive and more energy efficient way than traditional mining operations.

“Polymetallic nodules lie around like golf balls on a driving range,” Barron explains. “Using our harvesting system, we can collect them while only disturbing the top 5cm of  the sea floor.”

The system is a tracked vehicle that operates using the ‘Coanda effect’, directing a water jet in parallel with the sea floor to uplift the nodules, which will then be separated from most of the sediment at the sea floor. They’re then pumped up to the production vessel using a riser pipe.

The Metals Company says that around 92% of the sediment that is disturbed will remain at the bottom of the sea and the remaining portion, which enters the riser, will be returned later at an ecologically optimal depth. This is currently being determined by a group of independent scientists.

“We want to collect these nodules with the greatest efficiency and the lowest impact,” Barron says. “When you compare it with terrestrial mining – we’re able to lift the resource without touching it, a fundamental departure from what has gone on.”

By the end of this year, environmental studies permitting, The Metals Company plans to have a vessel in the Atlantic carrying out trials with the system. In mid-2022, trials are set to take place in the CCZ, and the environmental impacts observed.

It then hopes to launch its application to move from an exploration to a production licence in the middle of 2023, before beginning initial small-scale commercial production in 2024.

This also depends on whether the regulations have caught up with the industry by then. In international waters, deep-sea minerals like polymetallic nodules are governed by the International Seabed Authority, a UN body headquartered in Jamaica that is made up of 167 member states plus the EU.

Before the pandemic, the hope was that a set of technical and environmental standards known as the Mining Code – which has been in development for over two decades – would have been adopted in 2020.

While it has been delayed, Barron is confident the code will have been written into law by the time The Metals Company is ready to start production.

Autonomous robots may make the process less risky and energy-intensive

Benjamin ‘Pietro’ Filardo is another advocate of polymetallic nodule exploration, who believes the resource can be harvested with even less impact on the environment than The Metals Company plans to make.

His company, Pliant Energy Systems, is developing a robotic platform that uses slowly undulating fins instead of rapidly spinning propellers. “Rather than creating jets of fast-moving water for propulsion, our thruster moves large volumes of water slowly,” he explains.

When deployed in large swarms, the autonomous robots Pliant ultimately hopes to develop would work like bees, in comparison with the ‘giant shovel’ approach of the tracked crawlers many mining companies plan to use.

“We want to have minimal contact with the seabed – almost no contact if possible – and that can only be done with small swimming vehicles,” he says.

Another advantage of this approach, according to Filardo, is that it’s less risky than using just one large vehicle. “If one robot in the swarm fails, it really doesn’t matter; if one component in the crawler fails, the whole mining operation stops,” he says.

Pliant also proposes sending the nodules to the ocean’s surface in packets using buoyancy, which it anticipates would be less energy-intensive than a riser system. “Each packet of nodules will require a significant initial energy input, but once it has positive buoyancy, it’s an energy-free ride all the way up to the surface,” Filardo explains.

Nodule mining could be crucial, but its future is still uncertain

Pliant’s technology is at a much earlier stage than The Metals Company’s. It has a prototype robot and will begin rapid development of their next-generation system in the summer of 2021 with the aims of improving speed and efficiency, and developing autonomy.

But Filardo is realistic about just how much money will be required to get a system like this operating on a large scale. “Developing the AI for this swarm of mining robots won’t be a trivial task,” he says. “And only the prospect of a reward as great as a successful nodule mining operation is likely to fund such a sophisticated programme.”

To this end, he has set up the North Atlantic Consortium for Responsible Ocean Mining (NACROM) to raise awareness about, and potentially funding for, the systems he believes are required to achieve nodule mining with minimal environmental harm to the marine ecosystem.

However, he’s only too aware that it’s an industry that could get shut down before it even starts because of growing environmental opposition. “If the public puts enough pressure on the politicians, they may stop it from happening,” he says. “Politicians have other things to think about – Covid, pensions, taxes, unemployment.

Few have the bandwidth to delve deeply enough into this issue to come around to our way of thinking, which is that – if done right – nodule mining could be crucial to our planet’s future health, rather than a danger to it.”

Another challenge Pliant will face is convincing mining companies to adopt its technology. “They’re already too far down the road with the way they’re doing things,” Filardo acknowledges. “I think their perspective is they need to continue as they started until they’re mining and earning revenues. Then they’ll look more seriously at alternative methods.”

“There may be ten thousand quadrillion [dollars’] worth of metals on Psyche, an asteroid between Mars and Jupiter, but it’s out of reach,” he concludes. “Asteroid mining is still sci-fi. But mining nodules from the ocean depths with swarming robots? That’s a technological achievement within reach.”