What potential is there for pumped storage in New Zealand? 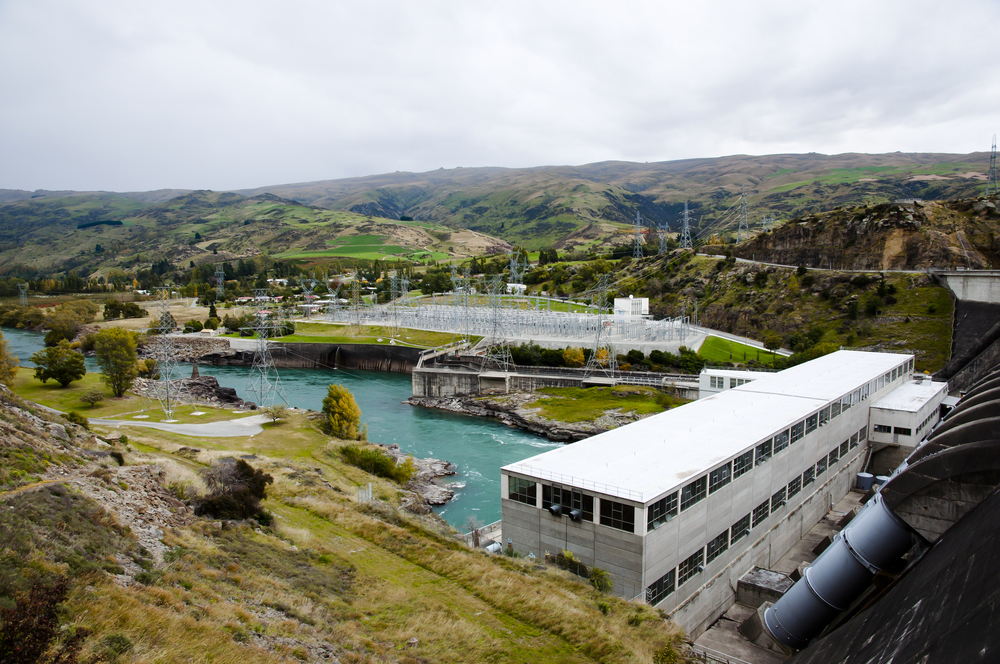 The lower reservoir for Lake Onslow could be Lake Roxburgh – an artificial lake on the Clutha River created by the Roxburgh Dam (Credit: Shutterstock/Adwo)

The Interim Climate Change Committee (ICCC) in New Zealand has recommended further investigation into pumped storage as an option to decarbonise the nation’s energy system. Here, Earl Bardsley from the University of Waikato discusses the technology’s potential in New Zealand.

Hydropower provides about 60% of New Zealand’s electricity in a normal year. However, the geographical proximity of the main South Island stations means the power supply is vulnerable to regional low-rainfall years – the “dry year” issue. This vulnerability arises because New Zealand has limited hydro storage capacity.

Periods of reduced hydropower are presently offset by increased power derived from gas and coal, particularly from the 1000-megawatt (MW) Huntly Power Station in the North Island. As part of maintaining this buffering role, the Huntly owners have had a policy of purchasing supplies of coal from Indonesia.

Following its signature of the Paris Agreement, New Zealand is committed to a transformation toward a low-emissions economy. For carbon dioxide, this means electrification of industrial heating and road transport, with the electricity supply being buffered against dry years for a sustainable transformation.

Demand-side management and electricity efficiency improvements have their place but cannot in themselves buffer against major dry periods like 1992 and 2008. A critical aspect is that the buffering mechanism should reduce power prices, encouraging conversions from fossil fuels to electricity.

The economics relate to what the buffering mechanism can contribute in normal years, which will be most years by definition. The present situation of fossil fuel buffering is not sustainable in the future and would not have any price reduction effect.

There would be a significant increase in electricity prices from an over-build of renewables because in most years the new generation capacity would do little other than spill wind and water.

The remaining possibility is pumped storage coupled with a large energy storage capacity. This requires constructing a significant upper reservoir with a large permitted drawdown in dry years.

An attractive aspect here is that such a scheme would be in continuous operation for performing income-earning ancillary services such as frequency keeping, moderating wind power fluctuations, and providing fast response against outages.

Specific aspects of the investigation are still to be announced. In the event of a successful business case, a further $70m has been earmarked for application to Onslow geotechnical investigations, with a possible construction decision to be made in 2022 to create a fully operational scheme by 2030.

Onslow would then take over the buffering role of fossil fuels and New Zealand electricity generation would become 100% renewable. The 100% renewable aspect is not so important in terms of emissions reduction because only a few percent of New Zealand’s emissions are contributed by power generation.

The critical aspect for Onslow pumped storage would be reduced electricity prices and sustainable dry year buffering, enabling the low-emissions transformation to be maintained into the future.

At present, Lake Onslow is a small 8km² artificial reservoir at elevation 684 metres above sea level. Converted to a pumped storage scheme with an expanded lake, installed pump/generating capacity would be in the order of 1000MW with an operating head averaging around 700m.

There are a range of possible configurations giving various Onslow energy storage capacities. The lower reservoir could be either the Clutha River itself or Lake Roxburgh – an artificial lake on the Clutha River created by the Roxburgh Dam. The linking tunnel would be 15km or 20km for the two possibilities, respectively.

There is also the option of extending Onslow storage into the nearby Manorburn basin, raising the level of existing reservoirs there. The maximum possible storage capacity is 12 terawatt-hours (TWh), achieved with a lake level maximum of 800m and permitted dry year water level decline to 720m.

Taking practical and ecological considerations into account, it is probably more likely to have a 60m operating range between 720 and 780m elevation. This would give 8TWh of storage capacity if Manorburn is included.

This is still significant considering that there is 4.5TWh total national hydro storage capacity at present. In contrast, the Snowy 2.0 scheme in Australia will represent only 0.35TWh of storage for roughly the same construction cost.

It is fortunate that the impending closure of the Tiwai point aluminium smelter will make available 800MW of cheap power from the Manapouri Power Station. That would be helpful for providing the 8TWh of initial energy input required to get Onslow to maximum storage if that is the size decided for the scheme.

An expanded Lake Onslow would be created by an earth dam near the present Teviot River outlet of the lake. For a maximum lake level of 780m, the dam would be about 2.5km in length and 100m high at its highest point. There would not be a need for completion before initial operation.

Given the tunnel and pump-generators in place, some initial income could be earned from pumped storage operation as soon as the 720m lake level is achieved and while the dam is still under construction.

A possible dry-year lake drawdown of 60m has environmental implications. In particular, there would be dust issues because of the many square kilometres of surface exposed.

Therefore, a major task during construction would be water-blasting of the thin soil cover within the maximum and minimum levels, so only clean rock would be exposed during drawdowns.

One ecological impact of an expanded Lake Onslow would be flooding of wetlands around the present lake margins. This might be mitigated by using the same wetland vegetation to establish constructed floating wetlands as part of a new Onslow reserve.

This has been at the expense of imposing large seasonal water level variations on the lakes, often resulting in damage and erosion along the soft glacial till shorelines.

Onslow pumped storage will purchase power from the electricity market when prices are low and lake levels are high, reducing the frequency of high lake levels and associated shoreline impacts. This might be further aided by imposing reduced operating ranges on the current main hydro lakes once pumped storage is available.

The alternative seasonal mode of operation has the interesting effect of the pumped storage operation being a net generator of power. Given some evaporation loss and 75% pump storage efficiency, this power loss is more than offset by reduced spill loss in the Waitaki hydropower scheme because of spill reduction from the hydro lakes having less frequent high water levels.

A further economic advantage to Onslow pumped storage is its longevity. With water sourced at or just downstream of Lake Roxburgh there would be minimal sediment introduced from the pumping operation.

Similarly, there are only small streams flowing into Lake Onslow from gentle topography with minimal sediment input. For practical purposes, the scheme would last forever.

When operating in the electricity market, Onslow will have the effect of removing both high and low prices, corresponding to generating and pumping respectively. A preliminary study at Auckland University suggests the net effect will be a lowering of prices, providing that the estimated $4bn construction cost is paid off over a long period with low-interest rates.

The business case evaluation may indicate that Onslow construction will be painless to the New Zealand electricity consumer. That is, the cost might be paid off over time by an electricity levy, but with the consumer electricity price drop being greater than the levy.

The business case overview is also tasked with seeking other New Zealand dry year pumped storage options as well as Onslow. It appears that the only other large-storage option is to have an upper reservoir in the headwaters of the Ngaruroro River. This site is located in the North Island to the east of Lake Taupo, which would serve as a lower reservoir.

There is energy storage capacity involved here in excess of 2.5TWh, but with less attraction from a pumped storage viewpoint because there would need to be a long 30km connecting tunnel and possibly only 500MW installed capacity.

On the other hand, the scheme could serve a dual purpose with some transfer of Taupo water to the drier Hawkes Bay region on the east coast, which suffered its worst summer drought in 2020.