With many current rescue winches proving to be too short or too slow to extract victims of mine collapses, a new model could be the answer. 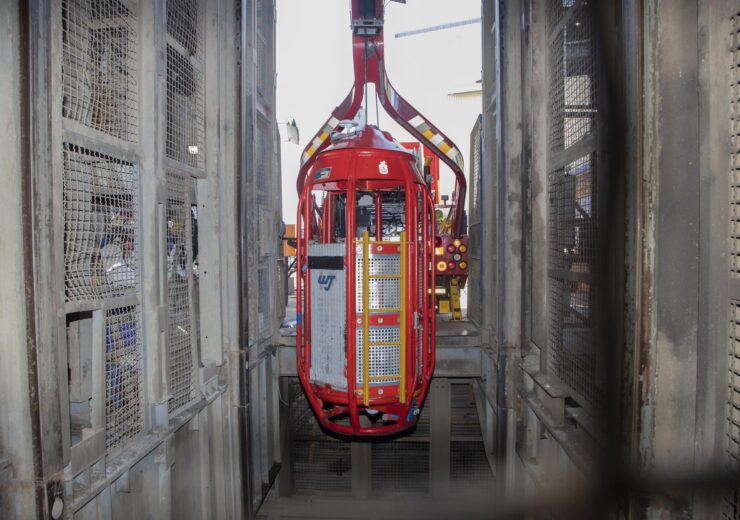 From Mexico to China, mine collapses are a constant threat to the people who work beneath the earth. And with many current rescue winches proving to be too short or too slow, it can take a painfully long time to extract victims once help finally does arrive. Andrea Valentino chats with Mannas Fourie, CEO of MRS Training & Rescue, and Martin Preece, executive vice-president at Gold Fields, about the limitations of existing rescue winches, why a new model is faster and less cumbersome, and how other countries may soon be following in South Africa’s footsteps.

Imagine being hundreds of metres below the earth – nearly as deep, in fact, as the Burj Khalifa is tall – when something goes wrong. An explosion, you guess, from the muffled crash somewhere in the darkness nearby. And then you hear another noise.

Though you don’t know it, that’s the sound of stone and dirt and mud, altogether weighing about the same as five city buses, collapsing round your ears. Then, finally, there’s silence, except for the sharpness of your breath and the beating of your heart.

This might sound like a fever dream. In fact, it’s what a real group of Chinese gold miners suffered earlier this year. Working in the coastal province of Shandong, 600m underground, a pair of explosions ripped through their shaft. About 70t of debris hurtled towards them, smashing escape lifts and trapping the workers half a kilometre from safety.

Even days after the disaster, rescuers weren’t even sure any miners were left alive. Finally, though, they made contact with a group of survivors. After another week of effort, 11 miners were finally evacuated alive. Around a dozen of their colleagues, though, were less lucky.

And though not every accident ends in fatalities, the numbers are still bleak. According to the International Labour Organisation, mining accounts for 8% of all deadly workplace accidents, despite employing just 1% of the world’s workforce.

Not that the situation is hopeless. With the support of a local gold mine, one South African NGO is developing new ways to extract underground miners quickly and securely when disaster strikes – with lessons the world over.

Drive south-west from Johannesburg and you’ll go by many standard scenes of South African life: poor suburbs, breezeblock townships and shrubland the colour of weak ale in the sun.

But if you turn left off Randfontein Road, past the piles of landfill and the trucks rumbling in the other direction, you’ll finally reach something extraordinary. Known as the South Deep Mine, it is one of South Africa’s largest gold mines and contains the deepest single-drop shaft on the planet.

Tumbling 3,000m below the earth’s surface, it takes lifts six minutes to reach the bottom. Workers complete the trip in cage lifts 9m in diameter, and when they arrive temperatures at the rockface can reach 50°C.

Not that the South Deep, operated by Gold Fields, is totally unique. Eight out of the ten deepest mines in the world are located in South Africa, something Mannas Fourie says has historically posed major challenges for mine operators and workers – especially when it comes to rescue equipment.

“If you look at what we currently have in the industry, we have a rescue winder that could go down to 1,200m,” explains Fourie, CEO of MRS Training & Rescue, a South African NGO. “That limited our capabilities if something had happened below that depth.”

Instinctively, this makes sense. After all, why have rescue equipment that can only go halfway down a shaft if something goes wrong? That’s especially true given the many dangers of life underground, from fires to fly-rocks to toxic fumes.

More fundamentally, though, grasping Fourie’s point requires you to understand how important speed is to any extraction. With traditional equipment, rescuers have to lift miners several hundred metres, then drop them off on a platform, then repeat the same process once or even twice more.

And because older winches can only carry a single miner at once – all at a leisurely 0.8m per second – you’re potentially looking at dozens of trips up and down a mine shaft.

Things risk being even slower if, like many rescue winches, you first need to hook the system up to the mine’s power supply. “If you look at the critical time to rescue people,” says Fourie, “you haven’t got that time to waste.”

As the famous ‘golden hour’ rule states, receiving treatment within 60 minutes of a traumatic injury increases the chance of surviving by over 80%. And though exact statistics are scarce, Fourie’s broader argument is mirrored by incidents at specific mines.

For instance, after a 2006 collapse at Sago, in West Virginia’s rugged coal country, 13 workers were trapped. Rescuers finally reached the group 42 hours later – but it was too late for all but one of the miners, the rest of whom had died of carbon monoxide poisoning.

In other words, it’s unsurprising that operators are always on the lookout for ways to get staff out quicker. “We never put a price on the safety of our people,” emphasises Martin Preece, executive vice-president at Gold Fields. “I think the priority is to get every one of our employees home safely every day.”

A new type of rescue winch

In January 2021, the South Deep hosted a red-letter day in the world of mining. Supported by workers from Gold Fields, Fourie and his team at the MRS tested out a new kind of rescue winch, the climax of a project that had begun nearly a decade ago.

Exploiting the twin shaft’s colossal depth, the MRS put this new rescue winch to the test – and zipped the full 3,000m to the bottom of the mine in one swoop.

“It allowed Mannas to take the equipment to its maximum capability,” explains Preece regarding the experiment’s location. “It’s an insurance policy that’s well worth the investment in our view, and that we hope we’ll never need to use.”

Of course, going the distance is a great start: no longer do rescuers have to stage extractions across several arduous legs. But the so-called mobile rescue winder improves on existing models in many other ways too.

For one thing, there’s the speed. Capable of travelling at 1.5m per second, it goes at nearly double the clip of older equipment. Then there’s its size. Robust enough to carry up to six miners at once, the winder is able to bring far more miners to safety quicker.

With statistics like these, Preece is unsurprisingly bullish about the depths of the equipment’s potential. “I’d have absolutely no hesitation plugging into one of these winders – and having full confidence in what the guys have designed.”

At the same time, Fourie and his colleagues have worked hard to make their equipment effective in other ways. Doing away with cumbersome mine-powered approaches – as well as hydraulic alternatives that required operators to fiddle with pressure valves as they descended – the MRS machine is run through a self-contained generator.

In practice, that means rescuers can get down to the business of actually helping miners even sooner, particularly useful in countries like South Africa, where power cuts are fairly common.

Even better, Fourie has clearly thought about rescue missions as a collective enterprise. With rescue winders stationed in Carletonville, just north of several gold mines, he says a team can be deployed within the hour.

Collaboration is another important piece of the puzzle. To secure a licence for the new platform, for instance, Fourie says that MRS worked closely with the South African Department of Mineral Resources and Energy.

Arguably even more important was liaising with trade unions, as well as the miners themselves. Given these are ultimately the people actually risking their lives down the shaft – and the ones who’ll be relying on the MRS to save them in case of emergency – this seems wise.

Happily, notes Preece, the initiative got an “overwhelming thumbs up” from workers, who even sung the system’s praises to the local news.

With the mobile rescue winch now safely deployed in the Gauteng gold fields, what about its prospects elsewhere? Though it was only unveiled a few months ago, Fourie says he’s already received messages from Australian mining interests developing their own model of winder – albeit one with a far smaller range than its South African cousin.

US mines have been in touch too, Fourie adds, something he suggests could be the start of a far broader trend. “I think that the world will follow,” he says. “It’s a good initiative and relates back to safety.”

Whatever happens to the mobile rescue winder, it’s clear that similar systems are here to stay. In February 2020, for instance, Levitt-Safety, a Canadian equipment company, hosted the world’s first Canadian International Student Mine Rescue Competition. Among other things, the students had a chance to rescue trapped actors from a mock mine.

That’s shadowed by work by Gantner, an Austrian company, which a few years back installed a state-of-the-art rescue winch at a mine in Tasmania.

All good news – especially if it can stop the Sagos and Shandongs of the world from taking more young lives before their time.