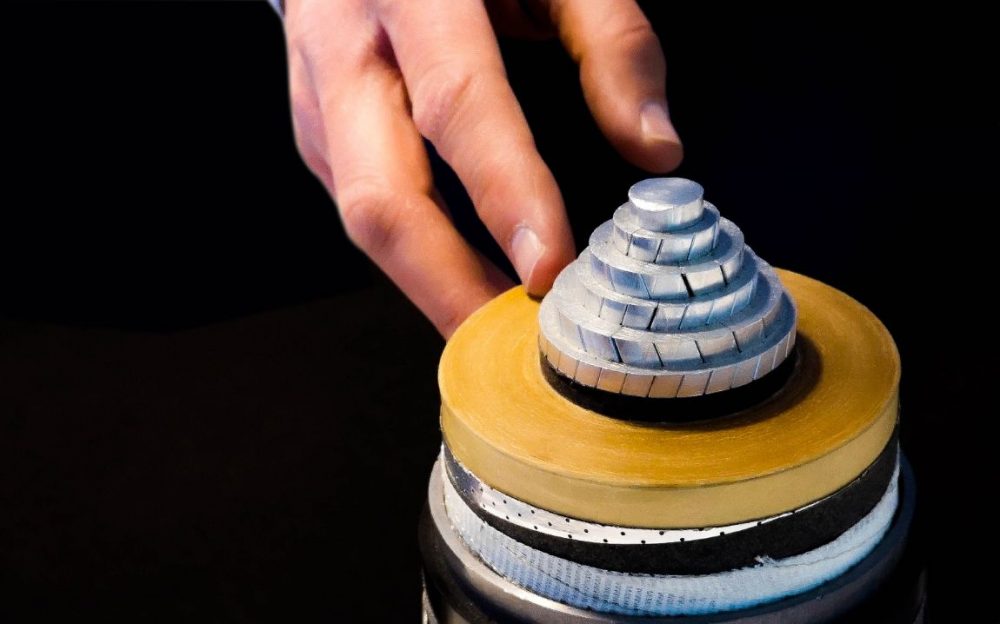 The success of MI cables is based on expertise, experience, quality, and durability (Credit: Nexans)

High voltage direct current (HVDC) mass-impregnated (MI) cables have been deployed in long-distance subsea power transmission projects for many decades. While a competitor has emerged in recent years in the form of extruded cables, MI cables nevertheless remain the technology of choice for projects such as the recently completed NordLink. Bjørn Sanden, technical director of Nexans Subsea & Land Systems (SLS), discusses why this is and why their reign is set to continue for years to come.

Mass-impregnated cables are well established as the first choice when it comes to subsea HVDC interconnector projects required to transmit power at voltages over 500 kV for long distances and at extreme depths.

The success of MI cables is based on expertise, experience, quality, and durability. To ensure the quality of the MI cable, robust design and well-proven manufacturing processes are required.

The design of MI subsea cables is based on environmental data such as maximum water depth, ambient temperatures, burial depth, thermal properties and so on, combined with electrical data including voltage level and power transmission capacity.

Because each interconnector project is unique, the MI cable system design is tailor-made to ensure the best possible performance over a long service life.

The conductor is made from copper or aluminium and consists of a circular centre wire with concentric stranded layers of keystone-shaped wires, resulting in a very compact conductor with a smooth surface.

The insulation system consists of lapped kraft paper tapes impregnated with a high viscosity compound. A cable rated at 500 kV will typically contain about 300 layers of paper.

The lapping is a particular strength of the MI design. This is because in the unlikely event of any small contaminants entering the production process, they are contained within the paper layers.

After the paper lapping is finished, the next process is to dry the paper and subsequently to impregnate the insulation system with cable impregnating mass.

To dry the paper effectively, the impregnation vessel is fully sealed, and a vacuum in combination with heating is applied. After the drying process, the vessel is filled with impregnating mass, and the insulation system is fully impregnated.

A moisture-proof barrier – a lead alloy sheath – is applied on top of the insulation system, and for mechanical and corrosion protection, a polyethylene sheath is added. For mechanical strength, transversal reinforcement and steel wire armouring is also applied.

To achieve a torsion-balanced design, two layers of armour wires are installed in opposite directions. The armour is corrosion protected by bitumen compound and two layers of polypropylene yarn.

The final step is a factory acceptance test to verify the integrity of the insulation system. One of the tests is to run the cable at a much higher voltage than it is designed for. For example, a 500 kV cable is tested at 900 kV.

Nexans’ cable factories in Norway (Halden) and Japan (Futtsu) are optimised for the manufacturing of long lengths of submarine cables, based on large-size turntables as intermediate storage between the different processes.

The storage turntables for the finished cables are capable of storing 7000 tonnes of cable, equivalent to a single continuous length of about 130-170 km.

The factories are situated at deep water quays, so the cable may be spooled directly from the onshore turntables to the transport and/or cable laying vessels.

There are no technical limitations for maximum cable length of MI cables. That means they can be used for the longest links both on land and in the sea.

MI cables have been qualified for operation at 600 kV, with a power rating of 1,100 megawatts (MW), giving a power transmission capacity of 2,200MW in bipole configuration.

Mass-impregnated cables design dates back to the 1890s

The first MI cables were introduced as far back as the 1890s. But while the principle remains the same, the design and manufacturing processes have been subject to constant upgrading and refinement.

Nexans first deployed MI cables for an HVDC link in 1977, the Skagerrak interconnector between Denmark and Norway.

The original cable system is still in operation, proving the reliability and the longevity of HVDC MI cable systems.

Part of the cable had to be repaired recently following external damage. The section that was replaced was taken back to the laboratory for dissection and investigation.

It was found that even after well over 40 years on the seabed it was in perfect condition, as if it had been manufactured yesterday.

Since the late 1990s a new HVDC cable technology has emerged that uses an extruded polymer as the main insulation, rather than impregnated paper tapes. Generally, the insulation used is cross-linked polyethylene (XLPE).

There are a number of factors in favour of XLPE cables. For example, they are mechanically robust and simple and quick to install thanks to a less complex jointing process, which is particularly important for land cables where you need a large number of joints (typically one every 1-2 km).

Extruded HVDC cables have been used widely in HVDC projects at up to 320 kV and 1,000MW over the past 10 years. Recently, XLPE cables have been tested and proven capable of operation at 525 kV with a power rating up to 2,600MW.

It would appear that, with its various advantages, XLPE would now go ahead to become the dominant cable technology. However, there is a critical factor at play – the force of history.

Organisations constructing these links, and the investors behind them, are naturally risk-adverse. For them, XLPE is still something of an unproven newcomer. In contrast, MI cables can point to a track record for reliability established over many decades in HVDC links.

As mentioned, a recent project to feature MI cables is the Norway/Germany NordLink interconnector, which started trial operations at the end of 2020.

The project is a collaboration between Statnett, Norway’s transmission system operator (TSO) and TenneT, TSO for parts of Germany, together with the German promotional bank KfW.

With its capacity of 1,400MW, the interconnector is able to export the wind power generated by about 466 wind turbines of 3MW each.

When there is excess production from renewable energy sources in Germany, NordLink enables it to be exported to Norway, while Norway’s own water reservoirs act effectively as natural “batteries”.

When the situation reverses, Germany can import renewable energy from those batteries. During dry and cold seasons in Norway, when the water levels in the reservoirs are lower, the connection to Germany will increase security of supply.

Building NordLink required the laying of a subsea cable connection over a distance of 623 km, making it currently Europe’s longest HVDC interconnection. The link is in the form of a bipole, with two parallel cables.

The project commenced in 2015, and Nexans was awarded the contract to design manufacture and install two of the three lots, a total of 700 km of cable, covering the Norwegian and Danish sectors. The Norwegian sector was particularly demanding as the cable had to be installed in deep waters, up to some 450 m.

The cable was manufactured in Halden, Norway, and installed by Nexans’s own cable laying vessel, the CS Skagerrak. To protect the cable, it was trenched into the seafloor using the specialist Capjet system.

Cable laying was carried out over 2018 and 2019 and the project was completed both on time and within budget. Following its successful energisation at the end of 2020, NordLink is undergoing trial operations, with full commercial operation scheduled for 2021.

What is the future for MI cables?

MI cables probably have a brighter future than ever before. The global energy transition will rely on more and more high voltage cables, longer subsea crossings and cables for deeper water.

There is also a need for high voltage transmission links on land. There is growing momentum to put these links underground, rather than on transmission towers.