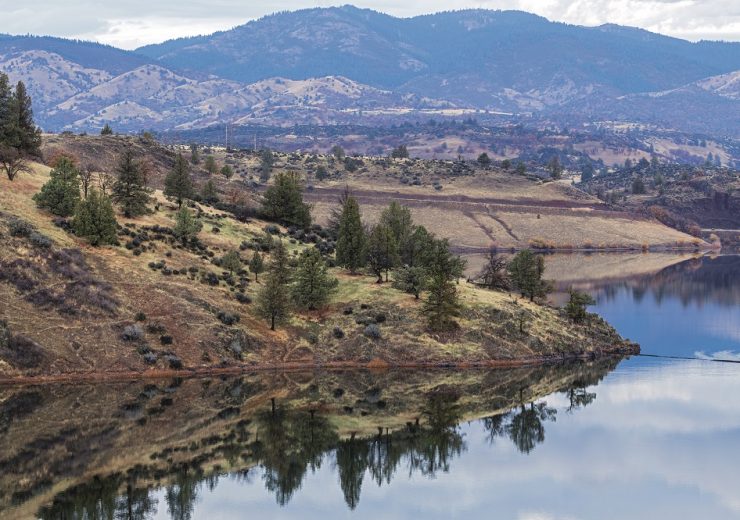 Reflections in the Iron Gate Lake Reservoir in California, US. Iron Gate Dam is one of four set to be removed on the Klamath River (Credit: davidrh/Shutterstock)

Berkshire Hathaway-owned PacifiCorp has announced a joint agreement to advance the Klamath River dam removal project in the US. International Water Power and Dam Construction (IWP&DC) magazine rounds up the latest news.

PacifiCorp recently announced an important joint agreement to overcome, what the US utility hopes, are the remaining obstacles to advance the Klamath Hydroelectric Settlement Agreement (KHSA), leading to completion of the largest dam removal and river restoration project in US history.

PacifiCorp has been working with settlement partners for over a decade to implement the KHSA, which would allow the states and tribes involved to realise their desire for removal of the Klamath River dams under terms that also ensure rate protections for PacifiCorp customers.

The agreement will provide additional resources and support to advance the most ambitious salmon restoration effort in history. When completed, the project will address declines in fish populations, improve river health and renew tribal communities and cultures.

The Memorandum of Agreement was signed in November 2020 by the states of California and Oregon, the Yurok Tribe, the Karuk Tribe, Berkshire Hathaway-owned PacifiCorp and the Klamath River Renewal Corporation (KRRC).

It describes how the parties will implement the KHSA as negotiated and signed in 2016 and sets the terms for the removal of four Klamath River dams.

“The Klamath River is a centrepiece of tribal community, culture and sustenance and a national ecological treasure,” California Governor Gavin Newsom said. “With this agreement, we are closer than ever to restoring access to 400 miles of salmon habitat which will be a boom to the local economy.

“I am grateful for the partnership between California and Oregon, the Yurok and Karuk Tribes and Berkshire Hathaway that proves when we work together, we can build a better, more inclusive future for all.”

With the Memorandum of Agreement, the parties:

Taken together, these provisions are intended to resolve FERC’s concerns raised in a July 2020 order and ensure a successful dam removal project.

“This is an incredibly important step forward on the path towards restorative justice for the people of the Klamath Basin, and towards restoring health to the river as well as everyone and everything that depends on it,” Oregon Governor Kate Brown said.

“From time immemorial, the stewardship of the indigenous peoples of the Klamath basin have nurtured the lands, waters, fish and wildlife of this region. In Oregon, the Klamath tribes remember a time when their livelihoods were supported by clean, healthy, and vibrant waters. It is that vision, that promise, that we are working towards restoring for the generations to come.”

Berkshire Hathaway Chairman Warren Buffett said: “I recognise the importance of Klamath dam removal and river restoration for tribal people in the Klamath Basin. We appreciate and respect our tribal partners for their collaboration in forging an agreement that delivers an exceptional outcome for the river, as well as future generations.

“Working together from this historic moment, we can complete the project and remove these dams.”

Yurok Tribe Chair Joseph James explained how “as Yurok tribal people, it is our sacred duty to bring balance to the Klamath River”. He added that at its heart, dam removal is about healing and restoration for the river, salmon, and for its people.

Karuk Tribe Chair Russell Attebery added that there is more confidence than ever that future generations of Karuk will enjoy the benefits of a healthy Klamath River just as their ancestors did.

“We are deeply grateful to the parties who negotiated a path forward for this epic project to restore the Klamath River,” KRRC Chief Executive Officer Mark Bransom said. “As has been the case numerous times in the past, the signatories to the KHSA have tackled obstacles head on and found creative solutions to daunting problems.

“But we particularly recognise the personal involvement of Governor Newsom, Governor Brown and Berkshire Hathaway leadership, who stepped in to ensure that dam removal proceeds. Once all the necessary approvals are obtained it will be full speed ahead in removing the Klamath dams and allowing salmon to access habitat that has been cut off for a century.”

Implementation of the amended KHSA requires two approvals by FERC for the transfer of the licence for the dams from PacifiCorp to KRRC and the states, plus approval of the dam removal plan.

Following the submittal of its application for a new licence to FERC in 2004, PacifiCorp began settlement discussions with a diverse group of stakeholders to resolve issues related to relicensing of the project.

Since then PacifiCorp says it has worked collaboratively with stakeholders to develop and enter into the Klamath Hydroelectric Settlement Agreement (KHSA). The KHSA was signed by more than 40 organisations, including federal agencies, the states of California and Oregon, Native American tribes, counties, irrigators and conservation and fishing groups on 18 February 2010.

The KHSA was amended in 2016 to provide for the transfer and decommissioning of Iron Gate, Copco No. 1, Copco No. 2, and J.C. Boyle Dams through the normal procedures of the Federal Power Act administered by FERC.