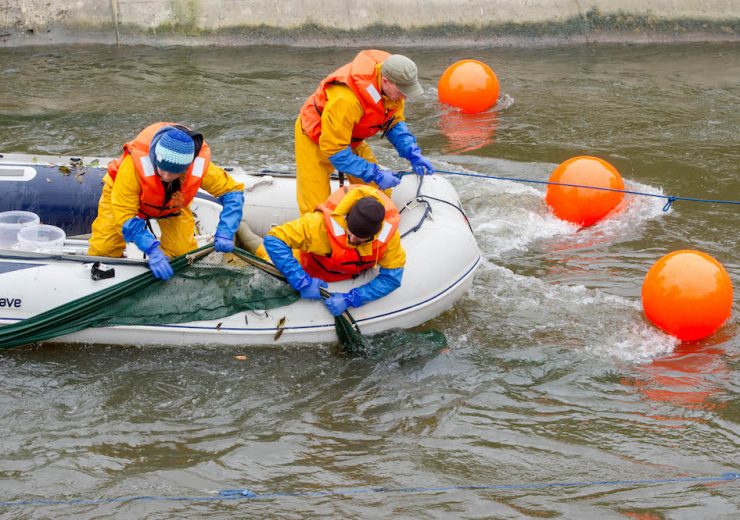 Employees of TUM recover nets at the Baiersdorf/Wellerstadt hydropower plant in Germany. The nets are checked, fish removed and then brought on land and examined for possible damage (Credit: TUM)

Modern hydroelectric power plants do not always protect fish more effectively than conventional ones. A research team at the Technical University of Munich has systematically studied how different types of power plants affect various fish species and their habitats. They say their detailed findings can improve future planning as well as retrofitting of existing plants. International Water Power & Dam Construction magazine has the latest.

Jürgen Geist, Professor of Aquatic Systems Biology at the Technical University of Munich (TUM) in Germany, and his team have been investigating the effects of hydroelectric power plants on downstream-moving fish as well as their impact on aquatic habitats since 2014.

So far, the research team has analysed seven power plants in Bavaria, which utilise four different technologies, both modern and traditional.

In order to find out whether fish are being harmed by hydroelectric plants, Professor Geist’s team set up nets downstream from the turbines, overflows, and fish passes in which more than 70,000 fish were caught. The researchers investigated whether and how fish were injured and their mortality rates resulting from such injuries. Approximately 8,500 fish were additionally x-rayed to obtain indications of internal injuries.

The team also investigated the composition of the aquatic biocoenoses (fish, invertebrates, aquatic plants, algae) and environmental factors including temperature, dissolved oxygen and pH, in the river upstream and downstream from the hydropower plants.

“The mortality rates at plants with modern technologies were not always lower than at the conventional plants,” reports Professor Geist in the results of his extensive study.

It had been assumed that modern plants, such as hydroelectric power screws or power plants which use very low head (VLH) turbines would protect fish better because these turbines rotate slowly, allowing fish to swim through them, and were thus considered “fish compatible”.

However, the study shows that there is no plant and turbine technology that protects fish better than others. Instead, their welfare depends on how the technologies are used, which species are present, and which conditions can be found at the respective locations.

VLH turbines, such as those installed at the research Au site on the Iller river, caused “relatively little damage”, says Professor Geist. However, it should be noted that fish survival was significantly reduced with this type of turbine at a different site that has a drop height of four meters.

Whether the plant is running at full load or partial load also effects the welfare of the fish. The empirical studies have shown that grayling and brown trout are more likely to pass through the power plant safely when the VLH turbine is operated at high load rather than at low load.

The majority of the fish population, especially small fish, followed the main current and were not prevented from passing through the turbine rooms by fish protection rakes.

The bypasses created at the power plants, where fish can swim around the turbines as they migrate upstream, are not used by most of the animals for the descent.

The studies also found that eel tubes are rarely used. To protect the eel in its natural distribution area in Bavaria, the scientists suggest opening the flushing gates in the weirs by ten to 20 centimetres during the main migration periods at night in the fall.

According to observations, eels clearly prefer to take advantage of this opportunity to move downstream.

The scientists also took a close look at the ecological water conditions around the plant.

“The negative effects of the interruption of the flowing water by the transverse structures should be compensated for in the best possible way. We recommend that replacement habitats for fish and other aquatic creatures be created and that areas should be restored to nature whenever possible,” says Geist.

He goes on to say, “the results of the study were discussed on site with all parties involved at each study site. As a result, improvements have already been worked out.”

The multifaceted investigation now offers a broad catalogue of influencing factors that can help in the further planning of power plants or in re-approval.

In mid-September 2020, the team also started to carry out investigations into the ecological effects of power plants on fish at Großweil in the Loisach, where the world’s first shaft power plant facility has been developed by the TUM. The project will run until the summer of 2022.

In other areas of study, the Technical University of Munich has been coordinating the Europe-wide project Fishfriendly Innovation Technologies for Hydropower (FIThydro) where researchers are working with industrial partners to study existing hydroelectric power plants.

Based on their results, the FIThydro team has developed new assessment methods and technologies such as a fish population hazard index, fish migration simulations and an open-access decision support tool for power plant planning.

During the four-year project, 13 research institutions and 13 companies from Germany, Belgium, Estonia, France, the UK, Norway, Austria, Portugal, Switzerland and Spain will study the effects of hydropower plants on ecosystems, particularly on fish at 17 test sites in eight countries.

The project is coordinated by TUM and received €7.2m in research funding from the EU research and innovation programme Horizon 2020 and the Swiss National Fund for Scientific Research (SNF).

“It was important to us that the test sites reflect the diverse geographical, hydro-morphological and climate conditions so that our results would be applicable to a wide range of hydropower plants in Europe,” explains Professor Peter Rutschmann who coordinated the project and is Chair of Hydraulic and Water Resources Engineering at TUM.

“We therefore attached great importance to ensuring that these sites reflect the diversity of geographical, hydro-morphological and climatic conditions. Thus, our results are applicable to different hydroelectric power plants in Europe.”

The project partners initially investigated existing methods, technologies and approaches for assessing the impact of the power plants and possible protective measures at the test sites and in laboratories. “We wanted to identify the knowledge gaps and find out how we could improve existing tools,” says Rutschmann.

One example is the Fish Population Hazard Index for European fish species, which quantifies the risk posed by hydropower use to fish populations. It was developed by scientists at the TUM Chair of Aquatic Systems Biology and the Leibniz-Institute of Freshwater Ecology and Inland Fisheries.

They collected data such as fish lifespan, reproduction rates and migration behaviour as well as habitat requirements such as temperature and flow rate of the stream.

Using this data, tolerance thresholds were derived for individual species that are specific to the impacts of hydropower plants. These can then be used by hydropower operators for the assessment and planning of mitigation measures.

There are also gaps in the existing knowledge on effective upstream and downstream fish migration measures – such as which fish ladders are suitable for which species or which conditions are ideal for fish to find them.

During downstream migration, fish can swim through the hydropower turbines and, apart from the risk of injury from the turbine blades, are exposed to enormous pressure changes. With high-tech sensors developed in the project by the Tallinn University of Technology as well as with new simulation models, these factors can now be studied in detail.

The results could be used, for example, to adjust power plant operations during fish migration periods in order to minimise harm to fish populations.

The second part of the project explored possible measures to retrofit hydropower plants – as well as decision-making tools for hydropower operators and planners.

“These decisions are highly complex,” says Rutschmann. “The hydropower plant and the site-specific conditions play a role. But it is also necessary to comply with regulatory standards on the national and EU level. And for the operators it is of course important for the measures to be effective and cost-efficient.”

Consequently, the TUM Chairs of Agricultural Production and Resource Economics and of Aquatic System Biology worked with the Norwegian research organisation SINTEF to produce a systematic cost analysis.

The cost framework contains data on river restoration, fish migration structures, fish protection systems and sediment management as well as the implementation of ecologically-optimised discharge events. This helps to identify the optimal and most cost-effective solutions for mitigating the impacts of a hydropower plant.

One of the main results of the project is the FIThydro Decision Support System that can be used when planning and assessing hydropower plants.

The user can enter data on the type of power plant, its location, fish populations present in the waterways and other characteristics. Taking into account environmental policy requirements and international regulatory guidelines, the software then analyses the data to calculate the level of environmental risk and the fish population hazard and recommends mitigation measures.

A wiki has also been created in the project. “There are different practices in every country, but the knowledge exchange is not yet where it should be,” says Rutschmann.

“For example, people are often unaware of measures that have been tried out and found to be efficient elsewhere. We hope that the wiki will support the networking of knowledge.”