Increased efficiency, improved flexibility and better economics are among the potential benefits of integrating a gas turbine for feedwater heating in a coal plant. GE’s new LMS100 seems to lend itself particularly well to this application as it offers not only unprecedentedly high efficiency but also two sources of low temperature heat – from the off-engine intercooler as well as the gas turbine exhaust itself. 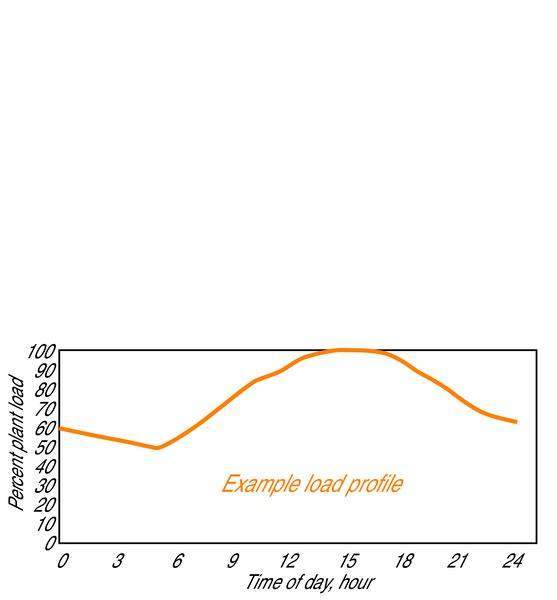 The concept of using gas turbines to perform feedwater heating (see Figure 1, for the basic concept) in coal-fired steam plants is not new. In fact, it dates back to the very first gas turbine employed in an electric utility in the USA. This was a GE Energy 3.5 MW gas turbine that used the energy from the exhaust gas to heat feedwater for a 35 MW conventional steam turbine unit. The system entered service in June 1949 in the Oklahoma Gas and Electric Company’s Belle Isle station. The unit was decommissioned in 1980 after 31 years of service in baseload operation.

The LMS100 – a 100 MW 3-shaft gas turbine that uses an intercooler between the low and high pressure compressors – is the first modern production gas turbine in the power generation industry to employ off-engine intercooling (Modern Power Systems, December 2003).

At 46% efficiency in simple cycle operation the exhaust gas temperature is less than 800°F (427°C), making the LMS100 even better suited to feedwater heating than conventional aeroderivative gas turbines.

Intercooler heat dissipation (see Figure 3) ranges from 20 to 30 MW of thermal energy and with an air-to-water intercooler system, this energy can be captured for low-grade steam or other applications, significantly raising the plant efficiency level. Using both exhaust energy (which amounts to 70-80 MWt) and this intercooler energy, an LMS100 plant can have greater than 90% thermal efficiency.

Another unique characteristic of an intercooled gas turbine is the ability to achieve high part load efficiency. At 50% load the LMS100 system heat rate (~40% efficiency) is better than most gas turbines at baseload. This becomes extremely beneficial in the overall cost of electricity equation for an integrated feedwater heating application, when plant load reduction is required.

Steam power plants from 150 MW subcritical to 500 MW supercritical could take advantage of the heat provided by the LMS100.

To examine the potential benefits we have used GT PRO® and STEAM PRO. Baseline coal-fired steam plants were developed in STEAM PRO and modified using RE-MASTER to add feedwater heating.*

Due to the unique characteristics of the LMS100, a portion of the energy rejected in the intercooler is also captured as a separate flow extraction and insertion in the RE-MASTER model. The models were run at part power both for the gas turbine and the steam turbine to estimate part power operating economics.

All evaluations were done with standard ambient conditions of 59°F (15°C) and 60% RH at sea level with standard inlet/exhaust losses for the gas turbine and the coal plant. The power plant sizes studied are shown in table 1.

A 150 MW class power plant with steam conditions of 2800 psi and 1050°F (565.6°C) was used to simulate existing power plants that could be upgraded with steam turbine improvements and retrofitted with the LMS100 in a feedwater heating application.

Figure 4 shows a flow diagram of a subcritical power plant with feedwater heating. The steam turbine and condenser have been upgraded to allow for complete expansion of the increased steam flows as the feedwater heating extraction is reduced. While the gas turbine can be fully integrated into the coal plant, placing appropriate control valves to allow either plant to function alone may provide additional benefits.

The gas turbine is fitted with two economisers. Each economiser gets a water flow stream, which bypasses the conventional feedwater heaters. A stream of water is also channelled to extract heat from the intercooler, providing additional heat into the steam cycle. An approach of 50°F (10°C) is maintained in the intercooler, which results in a smaller rejection of energy to the atmosphere through a cooling tower (not shown in the diagram). This smaller heat rejection provides controllability to the intercooled gas turbine cycle.

As the LMS100 engine is 46% efficient, the highest net plant efficiency appears to occur when the steam plant is turned down and the gas turbine plant is at full capacity. The lowest CO2 production rate occurs, as expected, when the gas turbine (with a CO2 production rate in simple cycle of 960 lb/MWh) is at full power and the steam turbine plant is at reduced power.

The first year cost-of-electricity is computed for two different operating scenarios: (1) a typical US plant operating with $2/MMBTU HHV coal price, $6/MMBTU HHV natural gas and no CO2 tax; and (2) a European operating scenario with coal fuel at $2/MMBTU HHV, gas fuel at $4/MMBTU HHV and a $40/ton tax on CO2 emissions. The plants are assumed to run 8000 h/year. To keep the comparison of operations simple, fixed and variable maintenance costs have been set at zero. All calculations are based on a 15 year evaluation period with a fixed capital charge rate of 14.3%.

The results of the first year cost-of-electricity analysis for scenario 1 and 2 are shown in Figures 5a and 5b, respectively. The colour bands show the cost of electricity in ¢/kWh, while the diagonal lines denote gross plant power output. In load following mode, as the load on the plant is decreased from max power, the operator will try to minimise cost of production. For example, a 220 MW output can be obtained by any number of gas turbine and steam turbine combinations (the bold line in Figures 5a and 5b represents the constant plant output of 220 MW). For a plant operating in the US scenario, the lowest cost of producing 220 MW occurs at the upper left of Figure 5a, ie, with the steam turbine turned down to 160 MW and the gas turbine turned down to 60 MW. On the other hand for the European scenario the lowest cost of meeting the 220 MW demand as shown in Figure 5b, occurs at the lower right-hand side with the gas turbine at full load (98 MW) and the coal plant turned down to 122 MW. The lower cost of gas fuel, along with a CO2 tax, forces economic operation of the plant to reduce CO2 emissions by getting a larger fraction of plant output from the more efficient gas turbine.

In the case of a supercritical 500 MW class power plant, the steam conditions at the inlet to the HP are 4500 psi and 1090°F (588°C). The higher pressure ratio of supercritical plants permits two reheats of the steam flow. This enables the plant to have a higher net efficiency than a subcritical power plant, although with increased installed cost. Since the transition from liquid to gas does not take place in a supercritical cycle it is possible to increase the inlet temperature of the water going into the boiler relative to the subcritical cycles.

The cycle diagram of a supercritical power plant with feedwater heating is shown in Figure 6. The heat recovered from the intercooler is shown as water extraction from the condenser and insertion into the low pressure feedwater heater. The gas turbine stack temperature is maintained at 172°F (78°C). The 500 MW steam plant has a much larger water flow than can be heated by the gas turbine. While the feedwater heating extractions are reduced, they are not eliminated.

Figures 7a and 7b show the first year cost-of-electricity in ¢/kWh for the same operating scenarios examined earlier. The operating cost trades are similar to the ones observed with the 150 MW plant: turn down of the gas turbine in the US scenario and the steam turbine in the European scenario. The higher efficiency and the larger size of the coal plant dominate the economic operation of the plant in both the US and the European scenarios for the limited range of gas turbine and steam turbine turndown examined here.

When considering new capacity additions, an integrated feedwater heating application can provide flexibility over a stand-alone steam plant. The plant can be operated with the coal fired steam turbine in baseload duty while applying the gas turbine as a midrange/peaker to meet the cyclic daily load demand (Figure 8a).

A 600 MW demand could be met with a 600 MW stand-alone steam turbine plant or the integrated feedwater heating plant described above in the supercritical example.

A rolling cost-of-electricity analysis (Figure 8b) shows that the 600 MW stand-alone steam plant has the lowest cost when operating at its maximum design load. Unfortunately, in this cycling example, that only occurs for an 8-hour period during peak load demand. The integrated feedwater heating plant provides an overall better cost as the steam turbine is operating at close to its design point throughout the 24 hour period, while the LMS100 gas turbine operates in cycling mode to deliver the balance of power required during high load demands.

There are two ways of analysing the benefits of feedwater heating. The power increase of the steam turbine could be attributed to the coal cycle alone or to the gas turbine cycle.

Attributing the power increase to the coal cycle results in a significant reduction of the coal cycle heat rate and CO2 produced by the steam plant. If the benefits of feedwater heating are all attributed to the addition of the gas turbine cycle alone we can assess the effective conversion of gas energy to electricity (47-54% for subcritical repowering applications and 57-60% for new supercritical applications).

Regardless of how you calculate the benefit – more output, better efficiency or lower overall emissions – integrating an intercooled gas turbine, like the LMS100, in a feedwater heating application provides significant advantages in terms of overall plant operating economics.

The first order for an LMS100 was placed by Basin Electric Power Co-operative of Bismarck, ND for its Groton plant. It will be in a simple cycle configuration and used for peaking duty. The rated net site capacity will be about 94 MWe, with natural gas as the primary fuel and distillate as back up.

Components of the LMS100, which are being manufactured by GE in Greenville, SC, and Evendale, OH, will be shipped to a GE test site in Houston, Texas, in 2005. The complete turbine-generator package will be assembled there, tested and then shipped to the Groton project site. The Groton LMS100 plant is scheduled to begin commercial operation in mid 2006.

Discussions are underway with a number of other potential buyers, including several interested in the coal plant feedwater heating application discussed in the main article. The first such FWH application would not be before 2007 and would probably be a retrofit project at an existing coal plant.