What went wrong at Hamaoka 5?

The shutdown of a 1380 MW advanced boiling water reactor (ABWR) in Japan, owing to damage in its Hitachi steam turbine, has forced its owner, Chubu Electric Power Co., Inc., to seek an interim measure to return the plant to operation, while also looking at a long term solution. 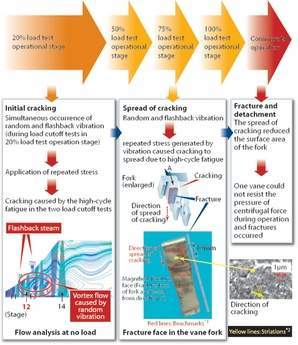 In October 2006 a report was presented to the Japanese government providing details of the damage that occurred at unit 5 of Chubu Electric Power Co’s (CEPC) Hamaoka 5 nuclear power plant in Shizuoka Prefecture, central Japan. The plant was shut down in June following an excessive vibration alert in its Hitachi TC6F-52 1800 rpm steam turbine. The problem was initially found to be in one of the three low-pressure (LP) turbines. It is anticipated that the plant will not go back online before the end of March next year.

Shortly after shutdown, in July 2006, the Nuclear Industrial and Safety Agency ordered the closure of Hokuriku Electric Power Co’s Shika 2 plant, only three months into commercial operation. Inspections showed that the Shika 2 ABWR, which uses the same Hitachi turbines as Hamaoka 5, had experienced similar defects. Shika 2 is expected to be shutdown for at least nine months.

Hamaoka 5 began commercial operation on 18 January 2005. It is one of Japan’s fleet of four operating ABWRs, which also consists of Kashiwazaki Kariwa 6 and 7, although these are of a different design. Hamaoka 5 and Shika 2 consist of a reactor providing steam to a high pressure (HP) turbine, and in turn to three LP turbines (A, B, C). The LP turbines are made up of moving and stationary vanes (blades), of which there are 7 stages. In total the turbine consists of 14 stages, the other 7 being in the HP turbine. Stationary vanes are located between moving vanes as a means of adjusting steam flow. The vanes are anchored in place at their roots by forks and pins.

Following Hamaoka 5’s forced shut-down, CEPC’s investigations indicated that a twelfth stage vane on turbine B had become disconnected from the shaft owing to damage to the forks and pins. Visual and non-destructive testing of the other 139 vanes on the stage, subsequently showed some 115 were found to have been affected, although no abnormalities were detected in the adjacent stages. Upon inspection of the other two LP turbines, A and C, cracking and fracturing were also identified in the twelfth stages, with 114 and 109 affected vanes found respectively. However, all HP turbines passed inspection and testing.

Why did it happen?

It is thought that the cracking began during the 20% load test level of the commissioning process. Fractographic studies have suggested that as load levels moved from 20% to 100% during commissioning, repeated stress prompted cracking to spread – as shown by ‘striations’ and the ‘beachmarks’ – due to high-cycle fatigue. Beachmarks are marks, seen on metal surfaces, which can be used diagnostically to ascertain the direction in which cracks are spreading, as well as their origins. Striation patterns, which are identified using an electron microscope, occur at right angles to crack development. It was concluded that during commercial operation concurrent ‘random vibrations’ and the additional vibration stress of ‘flashback’ were sufficient to exacerbate cracking, which in turn reduced fork surface area in the twelfth stage vane, leading to eventual fracturing. However, why had the twelfth stage proven to be exclusively vulnerable?

Random vibrations are caused by turbulence in the steam flow at zero or low load. Although it they are known to occur in the penultimate and final stages (13 and 14), the adoption of a larger turbine size, and consequent vane elongation, from roughly 110 cm in previous LP turbines to 130 cm, allowed the impact to be felt even at the twelfth stage.

‘Flashback’ is associated with the extraction system used to preheat water supplied to the nuclear reactor. One of the six bleed pipes in Hamaoka 5 is connected before the twelfth stage, while in Hamaoka 4 for instance, it is found before the eleventh stage. When the bleed supply is reduced quickly – such as during an emergency stop of the generator – a decrease in pressure occurs in the turbine. This results in a drop in pressure in the water-supply heater, which depressurises the water, causing it to boil. The steam produced creates a rapid reverse flow of steam into the turbine, a phenomenon known as flashback. The effect of the steam hitting the vanes is also to produce vibration. This is believed to account for the fact that only the twelfth stage vane has been affected.

During the original design process, which involved adopting a larger turbine, only the effects of random vibration were considered for the thirteenth and fourteenth stages of the turbine. The effect on the twelfth stage was overlooked. CEPC believes that this experience has re-emphasised the need for manufacturers to apply their existing knowledge less presumptively and ensure that testing and analyses are exhaustive.

In October CEPC made known its intention to adopt an interim measure, while also aiming at a separate long-term solution. The latter is to be the introduction of newly developed vanes able to withstand the adverse effects of random vibration and flashback. Their adoption is expected to take a considerable amount of time, given the complexity of the redevelopment process.

As an interim measure, it has been decided that there is to be complete removal of the moving and stationary twelfth stage vanes in turbines A, B and C, followed by their replacement with pressure plates. Such chromium-molybdenum steel plates have already been used in several thermal and nuclear power stations. They have a porous orifice structure to reduce pressure and assist flow regulation. CEPC plans thorough pre-use inspections both before installation and start of operation.

Indications suggest that at 5% load the pressure plates will reduce random vibration, owing to the narrower steam vortex range. The plates will also reduce the impact of flashback. Analysis has confirmed that the plates will reduce steam flow and pressure as effectively as the two removed vanes, and will not hinder the functioning of other vanes.

In addition, the installation is not expected to have an adverse effect on the reactor’s safety or stability since it runs at a constant thermal output. However, because the pressure plates reduce turbine efficiency, Hamaoka 5’s power output will fall by approximately 8%, from 1380 to 1270 MW.

The cooling system for the plant’s condensers uses seawater. A direct effect of the reduction in turbine efficiency due to the pressure plates is that water leaving the cooling system will be at a slightly higher temperature. CEPC has given reassurances regarding the potential impact of this; “…we have evaluated the released heat… and made sure that the environmental impact of the heated effluent would be no different than [that suggested by] the results of evaluation performed prior to construction”.

In order to minimise or better manage future problems, following pressure plate installation CEPC plans to enhance monitoring of vibration in the turbine shaft during operation, internal pressure of the water supply heater, and temperature variations in released water. Additionally, all three LP turbines will be opened up and examined at the unit’s next regular inspection.

The turbine failures have had marked financial repercussions. Hitachi has revised its fiscal revenues for the year 2006-7, partially in response to the Hamaoka and Shika incidents. In its release regarding consolidated financial results for the first half of 2006, the company reported that its ‘power and industrial systems segment’ had “posted an operating loss of ¥45.3bn, compared to… ¥23.2bn in fiscal 2005’s interim report… The loss was mainly attributable to … the repair costs for turbine damage at certain nuclear power plants.”

Meanwhile, CEPC has reported that that its nuclear power output is down 44.4% at 8.0 TWh. In addition it has stated that “…ordinary income is forecast to decline, with consolidated ordinary income down to ¥105bn and consolidated net income down to ¥63bn. Factors include high fuel prices and the shutdown of Hamaoka reactor No.5.” The company has also established an internal working group headed by its chief executive officer to look at measures to meet the demand for replacement power.