It has been projected that there could be around a 40% shortfall of available water across the globe by 2030, threatening drinking water supply, food production, and public health, and with serious implications for a large proportion of world power generation. A recent paper in Nature Climate Change, “Power-generation system vulnerability and adaptation to changes in climate and water resources”, by M T H van Vliet, D Wiberg, S Leduc, and K Riahi, suggests that reductions in usable water capacity could impact two-thirds of the 24 515 hydropower plants analysed and more than 80% of the 1427 fossil fired units assessed. 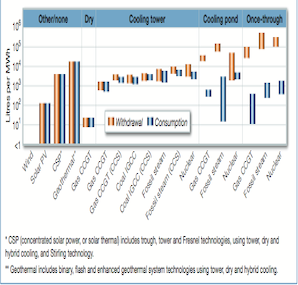 Against this background, a new report from the World Energy Council, in partnership with Marsh & McLennan and Swiss Re, and “supported by a task force of over 140 experts from across the world”, The road to resilience – managing the risks of the energy–water–food nexus, draws attention to the looming issue of potential water scarcity and its implications for the energy sector, calling for immediate action.

The World Energy Council highlighted the relationship between water and energy in its 2010 Water for Energy report. Since then, technological advances such as ‘recirculating’ systems as opposed to ‘once- through’ systems, the adoption of dry cooling, improvements in desalination processes, and reusing water from oil extraction have been progressively deployed to reduce the water footprint of energy, the report notes.

However, technologies to make energy infrastructure more resilient to the risks posed by the energy–water–food nexus often increase the cost of development. Thus, increased resilience would add to the International Energy Agency’s estimate of US$48–53 trillion in cumulative global investments needed in energy infra- structure by 2035. The scale of financing required is therefore significant and the private sector will have a crucial role in meeting this challenge, the report says.

Key findings from the report include the following:

To mitigate resource constraints, it will be necessary to further reduce the amount of water needed for energy production, the report says. Early analysis indicates that the overall water footprint of the energy sector could be lowered if more power or heat were produced by renewables such as wind, photovoltaics, or natural gas, as they have comparatively low water usage.

Technology changes within existing infrastructures can also help to mitigate nexus risks, the report says. Case studies have highlighted the utility of decoupling cooling systems from freshwater resources by using salt water or dry cooling, developing better use of wastewater, and integrating renewables in desalination and irrigation.

Methodologies that integrate water availability into design must also balance concerns regarding energy security, affordability and environmental sustainability. Some of the technologies highlighted as part of the low-carbon transition, such as biofuels or carbon capture and storage, which nearly doubles the water requirements of a coal power plant, may in fact increase water stress, the WEC report warns.