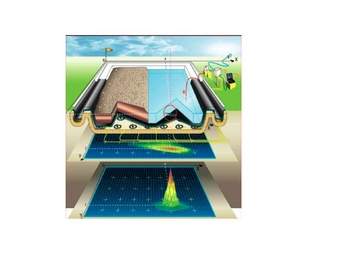 Hylam IQ, an intelligent membrane designed to pinpoint leaks, was launched by DRC Polymers in 2004. The waterproofing system has already been installed at two United Utilities-owned reservoirs in Cheshire and Cumbria, UK, and work is close to completion at Huntington water treatment works, near Chester.

Hylam IQ, which took three years to develop, incorporates a grid of sensors that continuously monitor the membrane. Data can be plotted on an electronic map that pinpoints the location of leaks to within a 4m quadrant.

A network of flexible sensors is first accurately installed on the project substrate; the sensors are spaced and numbered logically before being individually wired back to a modular terminal block. Optimum spacing is at 6m centres, although the system will work effectively down to 2m. The IQ membrane is then installed conductive side down, loose laid with traditional twin welds and detailing. Additionally system sensors and injector plates are installed every 3000m2. Prior to ballasting the liner integrity can be checked both visually and with the IQ mobile system, however once ballasted the mobile system will no longer operate effectively and integrity checks can then only be made with the fixed installation.

DRC technicians undertake a full integrity survey, which should result in certification. The system used for analysis consists of four basic units, DC power supply, transmitter, receiver and PC for interpretation of the data. The transmitter is connected to the network of injectors and provides on demand a current of 200 milliamps at between 50 and 100V dependant on the conductivity of the ground above the membrane. The demand is dictated by the system software. The receiver is connected to the network of sensors via the modular terminal block. The natural geology of the installation will induce a potential in the individual sensors which can be recorded by the system and must be eliminated by increasing the applied voltage from the transmitter. Once stable conditions have been achieved, the system is ready to take measurements from each sensor and then make comparisons with each adjacent sensor in the matrix. Measurements are made within a 10 millisecond window both charged and uncharged as the transmitter cycles between power on and power off, each of these cycles being of one second duration. The system will interrogate each sensor at least three times and store the data for later interpretation.

The membrane is a sophisticated laminate comprising an electrically insulating waterproof layer with a geotextile of known and consistent resistivity. If punctured, changes in potential will be detected in sensors adjacent to the hole, with the largest difference being measured in the closest sensor. The IQ software is able to interpret this data and provide a colour coded installation map highlighting the degree of any anomalies, along with the location of those anomalies to within 25% of the given matrix.

If the initial results are clean, the system operation will be checked by activating the pre installed system sensors.

The Haweswater AMP3 water quality improvement scheme required a new 9 megalitre twin compartment service reservoir to be constructed, high on the Cumbrian fells. The site is in an area of outstanding natural beauty in the Lake District National Park.

The following companies were involved in the project:

The UK£30M (US$59M) project centred on building a water treatment plant at Watchgate. From here, water would be pumped to a new service reservoir at Demings Moss and then gravity fed down to Bellfield, Swindale, Barkwood Springs, Haweswater and Braysteads for downstream distribution. In addition to the construction of both the water treatment plant and the service reservoir, the scheme involved laying over 60km of mains.

Demings Moss, where the service reservoir is located, is an established peat bog, some 460m asl. This presented some serious environmental challenges. Both English Nature and the Lake District National Park were involved in the final designs and landscape requirements. The scheme specified that the reservoir was to be a standard twin-compartment structure built to current standards but the location dictated that the finished structure would need to blend with the existing landscape and be sympathetic to the location. In order to achieve these objectives, it was necessary to remove the peat bog and store most of it under controlled conditions for the duration of the project. After excavating the site to accommodate the reservoir underground, a roof had to support the re-establishment of the peat bog. Under normal conditions a new service reservoir would not require any additional waterproofing. However, as this structure had to support an inherently acidic peat bog, a liquid coating was originally specified to protect the concrete roof against acidic corrosion.

The project started in good weather but by the time the contractors were ready for waterproofing, winter had begun to set in. It became impossible to find a ‘weather window’ in which the liquid coating could be applied with any degree of confidence. Several alternatives, including conventional loose laid membrane were considered to surmount this problem. Despite the pressing need to put the reservoir in service and the cost penalties of failing to complete the project on time, conventional membranes were not judged to be an acceptable alternative, as their integrity was impossible to guarantee. The search began for an effective solution.

The MWH service reservoir team in discussions with Brookes formulated a concept to improve client confidence in loose-laid membranes. Brookes went to DRC Polymer Products, who offered an ‘intelligent’ membrane.

At the MWH Service Reservoir’s teams instigation and with the help of Brookes Specialist Contractors, DRC set up a live demonstration of Hylam IQ for MWH and United Utilities. After two separate, independent demonstrations, technical approval for the membrane was obtained. With January approaching and no prospect of completing the project with the original materials in sight, Brookes specialist contractors reached agreement with main contractor Murphy’s to install Hylam IQ at Demings Moss.

Little could be done over the Christmas period but DRC Polymers put materials into production without delay. Brookes mobilised in January, completing the installation of the electronic sensors the same day. After accurately recording the location of each sensor, the Hylam IQ membrane was installed and temporarily ballasted by a team of five. 3000km2 of membrane was required and although this work was scheduled to take three days, in the event delays with releasing the second compartment caused interruptions. Even by upland standards the weather was unkind, with gales and snow presenting every obstacle to smooth progress. The reservoir’s vertical walls required lining prior to backfilling with both natural stone and clay in these extremely testing conditions.

Technicians from both DRC Polymers and its technology partner Sensor worked alongside the installation team from Brookes, providing assurance of integrity as the membrane was installed. In order to provide the best environment for the peat bog, it was necessary to install both a deck drain and bentonite matting. Although providing a healthy environment for the peat, this system posed a threat to the detection system. The air space created could cause a break in continuity so a further layer of conductive geotextile was required below the deck drain. The Hylam IQ system was fully installed and the initial certificate of integrity was issued to the contractor before the end of February. Work backfilling the original excavation could then begin.

The secondary geotextile, deck drain and bentonite matting were also hung down the reservoir’s vertical walls. Although this provided a degree of protection, it was thought prudent to install protection boards before backfilling with rock. Simple plywood was chosen on the grounds that it would ultimately biodegrade as compaction takes place around the reservoir. The toe drains were put in place and the inspection chambers built as the backfilling began. Only one incidence of mechanical damage to the membranes was reported.

In repair and maintenance situations, the ability to both easily locate and easily repair damage to buried waterproofing offers a huge cost advantage over alternative systems. Being thermoplastic, Hylam IQ can easily be repaired using conventional welding techniques. When roof level was reached, the integrity of the waterproof system was once again confirmed before specialist landscape contractors undertook a final capping with sphagnum moss. The outcome of full scale interrogative testing undertaken on April 26th was entirely satisfactory.

Since completing its first installation at Demings Moss, the Hylam IQ system has been installed at Unites Utilities sites in Cheshire and Huntington. DRC has recently won the contract to install the product at Godley Reservoir, near Hyde.