“The most advanced aeroderivative gas turbine for electrical power generation available today” is how Rolls-Royce sees its Industrial Trent. It was originally intended to be a dry low emissions machine, but recent market pressures have led the company to launch a water injected version, boosting the power from 52 to 58 MW. 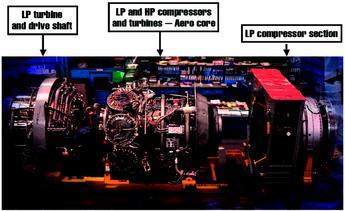 With a rating of 58 MW the recently launched Wet Low Emissions (WLE) version of the Rolls-Royce Industrial Trent (the Trent 60) is the most powerful of the aeroderivative industrial gas turbines. At 40.7% (60Hz) it is also among the most efficient machines in this size class, although not quite up to the level of the 52 MWe Dry Low Emissions (DLE) version, the Trent 50. At 42%, the Trent 50 can claim to have the highest efficiency among industrial gas turbines of this kind of size.

Developing the DLE version of the Trent, as with other dry systems, has been a long and difficult process, involving a good many iterations to get machines into compliance. The two units at the Avedøre mult-fuel power plant in Denmark will be the last to be converted to fully emissions compliant DLE combustors. Seven Trent DLE sites were converted over to compliant DLE combustors in 2002/2003. Since the Trent units at Avedøre are just part of a very large plant, the owner requested that the retrofit be delayed until this summer. The Croydon DLE plant in the UK will also be compliant when it starts up, in August 2004.

To introduce a WLE version after the DLE might seem a slightly odd way of going about things. And in technology terms, with an increased focus on reducing water consumption in the power sector, it could even be seen as a retrograde step. But Rolls-Royce says it is responding to perceived customer requirements, notably in the United States, where customers are still opting for wet systems, even in California. Scott Nolen, manager of the Rolls-Royce Trent programme, says that initially a WLE version was not envisaged, the thinking being that for permitting reasons DLE would be the preferred option. However, Rolls-Royce is now seeing interest in WLE, one attraction being the extra MWe it makes available, another being the inherent simplicity compared with dry technology, with both having a guaranteed maximum NOx emissions level of 25 ppm.

The first WLE version of the Trent has been under test at Rolls-Royce’s own Derby facility, which is owned by Rolls-Royce Power Ventures (RRPV) and operated by RWE Innogy under contract to RRPV. The Derby plant was converted from DLE to WLE in April 2002, and the site was then handed over for commercial operation in October 2003.

RRPV projects provide an opportunity to demonstrate the reliability of the machines, while at the same time extracting value and essentially providing a route to market for Rolls-Royce products.

The Industrial Trent is a three spool design derived from the RB211 aero and industrial engines. There are three basic elements:

• Axial flow compressor sections. There are three separate sections of compression in the Trent engine, each section operating at its own optimal speed and driven by its own corresponding power turbine section.

• Turbine sections. Three independently operating sections drive their own matched front end compressor section. The HP and LP sections are free to operate at the ideal speed for maximum engine efficiency. The LP rotor also acts as the main power turbine. As well as driving the LP compressor section it is also connected to the driven equipment.

• Combustion section. The Trent 60 uses a slightly modified version of the liquid-fuel annular combustor system that is employed in the aeroengine. In the WLE system, water is injected into the combustion chamber to reduce NOx and boost power. Since the Trent 60 only uses water in the combustion chamber, water use is kept to a minimum says Rolls-Royce. An on-line monitoring system allows water usage to be minimised as power demand and ambient conditions change, while still maintaining compliant emissions levels.

Among the benefits deriving from the Trent’s aeroengine lineage are small footprint, low weight and fast start capability, meeting the ten minutes from cold to full power requirement that is effectively essential in the US market. It also requires only 240 kW of start-up power and can undergo 2500 starts without overhaul.

Ease of maintenance is a further benefit derived from aircraft practice, with the engine split into three interchangeable modules – LP compressor, IP and HP compressors and turbines, and LP turbine – a “three-way split”. It is possible to swap these modules at site in under 72 hours, says Rolls-Royce, avoiding the need for a spare engine.

The Trent package design enables the engine to be installed and removed sideways, with sliding doors allowing full access to the engine and making it possible to complete a full engine change-out in under 24 hours.

The Trent can operate at 50Hz or 60Hz, without gears, so gearbox related losses in power or efficiency are avoided. Instead there are two types of low pressure compressor, 3600 rpm or 3000 rpm.