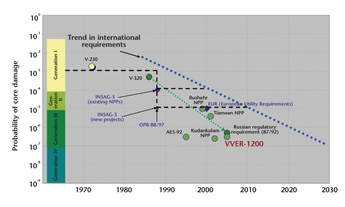 A main attraction for Siemens in its proposed nuclear partnership with the Russians (see p 35) is the VVER-1200 reactor, the latest manifestation of Russia’s pressurised water reactor (VVER) technology, among whose distinguishing features is the use of horizontal steam generators as opposed to the vertical ones used by other PWR suppliers. Somewhat confusingly, the VVER-1200 is also sometimes referred to as AES-2006, which appears to denote the complete nuclear power plant in which the VVER-1200 is included. To further compound the confusion, there are in fact now two versions of the VVER-1200 under construction in Russia, one at the Novovoronezh site (Phase II) and one at Leningrad (Phase II at that site), both building on the VVER-1000 (V-320) technology, but with reactor thermal capacity increased to 3200 MWt and electrical capacity to 1200 MWe (from 1000 MWe). According to Atomenergoprom “this competitive approach” will allow “the best decision” to be made when it comes to serial construction of commercial units, as envisaged under Russia’s ambitious government plans for nuclear power expansion.

The first VVER-1200 unit at Novovoronezh is due to go commercial in 2012, with a second unit following a year later. The first VVER-1200 at Leningrad is due to enter commercial service in 2013, again with a second unit following one year later. Future plans envisage further VVER-1200 units at these sites as well as many others elsewhere in Russia, with the VVER-1200 destined to become the new workhorse of the Russian nuclear industry. It is also featuring prominently in proposed nuclear export projects (eg in China, India, Hungary, Ukraine and even Turkey).

The power plant design being used at Novovoronezh has been developed by Atomenergoproekt Moscow and will incorporate more passive safety features than that being deployed at Leningrad, where the lead designer is Atomenergoproekt Leningrad (which recently merged with Atomstroyexport).

The Leningrad design, which is a direct evolution of the AES-91 (V-428) technology supplied to Tianwan in China, is focused on improvement in active safety functions and can be classified as Generation III, comparable with Areva’s EPR. The initiative for an improved VVER-1000 (V-320) can be traced back to around 1977 and a collaboration between Atomenergoproekt (St Petersburg), Gidropress (Podolsk) and IVO of Finland (long time operators of VVER-440s at Loviisa, albeit with Western I&C and safety features). The resulting AES-91 reflected Finnish safety standards and in 1991 was offered in the bidding process for Finland’s fifth reactor project (abandoned a couple of years later, but subsequently resuscitated, with the EPR (currently under construction at OL3) eventually being chosen from a group of contenders that included an updated version of the AES-91).

The Novovoronezh design, which can be seen as Generation III+, incorporates a complete upgrade of safety systems, with the use of passive as well as active systems – the most direct antecedent being the AES-92 (V-412) technology the Russians are providing for Kudankulam in India. Another close relation is the AES-92 (V-466) design (profiled in MPS, February 2007) being deployed at Belene in Bulgaria (also currently under construction), and which has been certified as conforming to the European Utility Requirements specifications.

As explained in an October 2007 article published in our sister publication Nuclear Engineering International, in the Novovoronezh design “Passive systems can independently perform all critical safety functions without active systems and without operator control. These systems are capable of functioning even in the event of a total loss of auxiliary power, including emergency AC power supplies. In turn, active systems can provide safety when power supply and operator control are available.” Also, “Some systems operate on the principle of combining normal operational functions and safety functions in the same mechanism. Thus, in emergency modes, no changeovers are necessary. This substantially increases the reliability of safety functions because it precludes long-term non-detectable failure. It also yields financial and economic benefits by reducing the amount of equipment used.”

The steam turbines for units 1 and 2 of Novovoronezh II and units 1 and 2 of Leningrad II are being supplied by Power Machines of Russia and will be of the full speed type. However half speed turbines of the Arabelle type will be made available for future VVER-1200 projects thanks to the joint venture established in 2007 by Alstom and Atomenergomash (another Atomenergoprom subsidiary). One of the first VVER-1200 projects to install half speed machines will be the twin unit Seversk plant near Tomsk, under a contract signed last year between the joint venture and Atomenergoproekt Moscow. Construction at Seversk will start in 2010, with the first VVER-1200 unit starting up in 2015 and the second in 2017.