Commercial operation of the Värtan 8 (KVV8) plant in Stockholm, one of the world’s biggest biomass-fired combined heat and power plants, with an installed capacity of 130 MWe and 280 MWt of district heating capacity including 80 MW of flue gas condensing with humidifier, is expected this autumn. Fortum Värme – jointly owned by Fortum and the City of Stockholm, and the first energy company in Europe to have the Forest Stewardship Council’s (FSC) Chain of Custody (CoC) certification – held an inauguration ceremony for the plant in May. It will use forest residues and wood waste, consuming about 12000 m3 of wood chips per day, and provide district heating to nearly 200 000 households, as well as generating electricity. 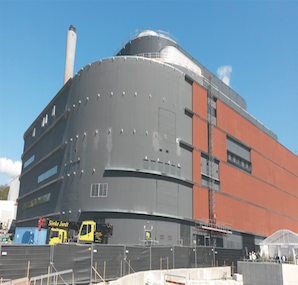 The plant is being built in central Stockholm, near residential areas, employing totally covered conveyors, making use of underground caverns (originally used for oil storage) plus 2 km of newly constructed tunnels. The walls of the new plant building have been shaped so as not interfere with existing oak trees.

The 330 MWt boiler, with steam conditions of 140bar/560°C, is of the circulating fluidised bed type, supplied by Andritz, while the single-casing 3000 rpm 154 MW steam turbine has been provided by Doosan Skoda.

“With the new power plant 90% of Fortum Värme’s energy production will be based on renewable and recovered energy sources. That is quite unique. Our goal is naturally 100% renewable production,” said Karin Wanngård, finance commissioner of the City of Stockholm.

“Together with the City of Stockholm, we are taking steps towards a circular economy by utilising biomass, waste and recovered heat from data centres in energy production,” said Fortum’s president and CEO Pekka Lundmark.

Fuel for the new plant will be delivered to the Energy Port at Värtan where a new 21×200 m pier is being constructed to accommodate larger vessels, with a land based power supply, meaning ships do not need to run their diesel engines to produce electricity while docked.

The fuel will come from “sustainable forestry” in Scandinavia, the Baltic countries and Russia, and be delivered by rail as well as by sea.

As well as building the new CHP plant, the existing plant at Värtan is also being developed, including increasing the proportion of biofuel used.