India’s first GT26-based combined cycle plant is nearing completion in Utran, in the western state of Gujarat. The gas turbine was successfully synchronised to the grid in July and once the plant is fully operational, it will be one of the most efficient power plants in the country. Unusually for a GT26-based plant the facility has a bypass stack to allow simple cycle operation. 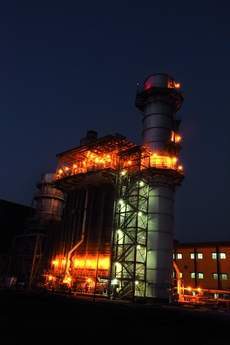 The Indian economy is growing at one of the fastest rates in the world. Energy demands in India have consequently risen enormously and the government is promoting power station projects to ease the country’s chronic power shortages, which are widely viewed as posing a serious threat to its rapidly expanding economy.

Gujarat is among the fastest growing states in the country. Even though the per capita consumption of electricity in the state is significantly higher than the national and Asian figures, it is still far below the world average and the government of Gujarat regards the development of the power sector as being of prime importance.

The installed capacity in Gujarat is 9561 MW and a capacity addition of 10 752 MW is planned during the current Five Year Plan.

Gujarat State Electricity Corporation Limited (GSECL) was promoted by the erstwhile Gujarat Electricity Board as its wholly owned subsidiary in the context of liberalisation and as a part of efforts towards restructuring of the power sector. With an installed capacity of 4777 MW and 1445 MW of power projects under implementation, GSECL has a significant presence in the power industry. In line with this strategy, in 2007, it awarded Alstom a contract worth about 175 million euros for the construction of a 370 MW combined cycle power plant at Utran, in the Surat District of Gujarat. The plant is an extension of the existing 135 MW combined-cycle power plant and will increase the generating capacity of GSECL by 8%.

In developing the project, GSECL emphasised the need for:

The technology selected is a KA26-1 MS combined cycle plant, with a multi-shaft 1-on-1 configuration. It will be the first in India to use the GT26 gas turbine. KA24/KA26 combined cycle plants have accumulated more than 3.3 million operating hours and more than 58 000 starts, with a fleet-wide plant reliability of above 97% from start of commercial operation till today. Although this is India’s first KA26 power plant, some 33 KA26 units are already in commercial operation and 33 further units are in the pipeline, with status ranging from contracted to hot commissioning.

The key plant components are:

To compensate for the effect of high ambient temperatures (up to 45°C) on the generation capacity of the gas turbine, the plant includes an evaporative air inlet cooler.

The sequential combustion technology used in the GT26 achieves low emissions and high efficiency not only at full load, but also at part load. With India ratifying the Kyoto Protocol in 2002, the government has placed tighter restrictions on GHG emissions and India, being the country with the highest number of projects registered with the Clean Development Mechanism, is in the process of making its presence felt further with the increasing adoption of environmentally friendly technologies.

The Utran plant is an example of this. The intention is to register it as a CDM project and the hope is that the plant will benefit from the carbon credits market, with the operator able to sustain the plant during periods of high and volatile gas prices by obtaining carbon credits at the appropriate time.

Alstom’s Plant Integrator concept has been employed in the plant design. A centralised engineering database and 3D modelling tool helps the engineering team to accommodate changes in the layout, which may stem from constructibility issues, access to equipment for installation, operation and maintenance, safety, surrounding property layout, or specific owner requirements.

Utran, being an extension unit, is sandwiched between living quarters on one side, and the existing plant on the other and the design had to undergo a number of changes from that originally envisaged. For example, the original location of the chemical handling plant was found to be undesirable due to its proximity to the living areas. The power evacuation scheme through the switchyard needed modification to avoid demolition of existing dwellings. Also, the fuel gas compressor location had to be changed to cater for the response time of the control system.

All this resulted in a major re-alignment of the layout and interconnections from those originally proposed. But this was achieved quickly by drawing on local engineering competence and expertise located around the world within the organisation, enabling modelling of various options and development of a tailor-made and optimised layout.

Operational flexibility is one of the crucial requirements for commercial success in a dynamic market and today, globally, there is a greater demand for flexibility than ever, with plants expected to operate comfortably over the full range of operating regimes, from daily start/stop to baseload mode.

Such operational flexibility is supported by the start up behaviour of the Utran combined power plant. The start-up time, from GT ignition to plant baseload, for the Utran KA26-1 combined cycle plant is less than 60 minutes following an overnight shutdown and less than 2 hours following a weekend shutdown.

Further flexibility comes from the ability of Utran to operate in simple cycle. The plant is equipped with a bypass stack, allowing simple cycle operation for short periods, even though this reduces efficiency and adds to costs. It is also unprecedented for a KA26 installation, but has enabled specific customer requirements for the project to be met.

However adoption of a bypass stack threw up several challenges, such as operation of the Once-Through Coolers (OTCs) independently of the HRSG water-steam cycle and switching from one operation mode to the other under load. Integrated re-engineering and adoption of the multi-shaft one-on-one configuration enabled these problems to be solved. To operate the OTC in simple cycle mode the OTC feedwater is supplied from a simple cycle feedwater tank. The steam, extracted from the LP OTC, pre-heats the feedwater up to a minimum of 150°C, which is required to prevent potential corrosion of the OTC. The pre-heated feedwater is pumped (via SC feedwater pumps) to the LP and the HP OTC. The steam pressure at the OTC exit is controlled at a constant intermediate level to guarantee stable OTC conditions. The generated steam is blown off into the bypass stack and the blown off steam is replaced continuously by fresh demineralised make up water. This is viable because of the high power demand.

The fuel gas skid is located about 600 m from the GT and particular efforts went into optimising the line size and layout to minimise the pressure drop to meet the SEV burner requirements.

The key to success here was a multifaceted design approach aiming to avoid pulsation and careful locating of an infrared analyser to minimise the time lag between EV and SEV.

Further, by providing this decoupled system for SEV and EV, it was possible to optimise the gas compressor size to cater just for the EV gas requirement, minimising capital cost and auxiliary power consumption.

Another first was the Indian-designed SCADA system for the power plant’s 220 kV substation, which is based on redundant human machine interfaces and employs a Microsoft Windows 2000 operating system.

The substation automation system conforms to IEC 61850 and has a decentralised architecture.

The SCADA implementation was especially intricate in the case of the 220 kV generator bays, with their very complex interlocks with respect to back-energisation, synchronisation, metering and control and protection philosophy – a big challenge for the Utran project. Using a dedicated task force, the SCADA system has been successfully implemented along with traditional control panels located about 500 m from the switchyard relay panels.

The SCADA system allows the Utran switchyard to be completely unmanned during normal operation, with all switchyard parameters, alarms and events, meters, trends, protection relay parameters etc monitored via the redundant servers/operational HMIs, including analysis for on-line operating decisions.

A key focus of GSECL is the use of environment friendly technologies, including:

• Minimum use of sub-soil (sweet river) water, a main requirement of the project. This has been achieved by using an efficient effluent treatment plant that recycles water from not only the new Utran plant but also accepts effluents from the existing units to maximise recycling and minimising discharge. This coupled with the capability of running at higher cycles of concentration has resulted in a saving of 67% in sweet water compared with a conventional plant. In addition, the water management strategy includes ground water recharging (rain water harvesting) for raising ground water table.

• Reverse osmosis for water treatment. Avoids consumption of chemicals and is an efficient means of removing salts, chemical contaminants and heavy metals, such as lead.

• Ni–Cd batteries for UPS instead of lead–acid in spite of their higher cost. As well as reduced environmental impact also have a wider range of operating temperatures and longer life.

• Minimum noise, with contour studies of the whole plant to check compliance.

With a contract completion time of 27 months for a combined cycle power plant including open cycle capability the project represents one of the shortest lead times in India to date. Meeting the deadline however was not without its challenges:

• Limited space on the site. This required the plant layout to be optimised such that, apart from the central control building for the power block, there is only one other control building – integrating a number of functions, reducing costs and numbers of operating staff.

• Logistics. A pre-survey of transport and material handling logistics was done to reduce the transit time from port to site. This consisted of a detailed analysis of the potential bottlenecks and identification of inadequate infrastructure such as bridges, turning radii, railway lines with overhead electrification and rights-of-way problems. Obstacles to the transport of over sized consignments were studied in detail and solutions implemented, including upgrade of infrastructure and obtaining clearances from relevant authorities, etc. The result was not only reduced project delays but also improved road conditions in Gujarat.

Having completed construction the next challenge is achieving good performance. Alstom has signed a 15-year contract with GSECL to maintain the Utran CCGT, the scope covering supply of parts and services for scheduled and unscheduled maintenance of the GT26 gas turbine and associated electrical generator, auxiliaries and controls, as well as 24/7 plant support centre access.