Using robotics to get the inside information

US company Foster-Miller (currently in the process of being purchased by Qinetiq of the UK) has been using robotic technology in the nuclear industry for over 15 years, notably its CECIL system to clean and inspect nuclear steam generators on PWR plants. The question arose: could similar robotic technology benefit fossil-fired plants? The answer turned out to be very definitely yes. 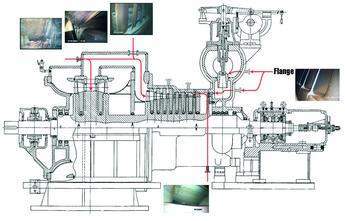 Detailed diagnostics and condition assessments on large steam turbines are often performed using remote visual inspection equipment. Figure 1 shows a typical videoscope used for a variety of plant inspections. These products are designed as one-size-fits-all tools, which can be used to inspect everything, from turbines to piping and piston engines.

While these systems perform well in many cases, their main drawback is their inability to access all areas of a steam turbine that might be required to evaluate a particular problem. In particular, their extreme flexibility becomes a liability when a problem is in the mid-span stages of the turbine, or in areas requiring the crossing of large, unsupported gaps from the access point to the inspection target area. In short, since they were not specifically designed for steam turbine inspections, they are not especially well-suited to the task.

In many cases, tooling designed specifically for the problems faced during steam turbine inspections is required. Such tooling requires a combination of stiffness and flexibility and a degree of self-support that typical videoscopes lack. New inspection tooling would also require the ability to be easily reconfigured to respond to the large differences between steam turbine configurations. (In contrast to, say, gas turbines which tend to be very similar to one another, steam turbines come in a large variety of configurations and each unit presents almost unique inspection challenges.)

Figure 2 shows an example of such tooling as developed through work with naval steam turbines.

The primary differences between this group of tools and conventional off-the-shelf videoscopes are: their axial stiffness; the increased number of degrees of freedom; their telescoping action; and their ability to support themselves. Figure 4 illustrates some of these capabilities.

The best way to illustrate the difference between conventional tools and the improved tooling is by looking at applications where the new equipment has been used to inspect areas of turbines normally thought to be inaccessible.

The first case concerns a utility plant in the mid-western USA equipped with a 321 MW cross compound steam turbine generator that had been in service since 1961. The turbine consisted of an HP and IP section as well as two LP sections – a fossil steam turbine design that later evolved into a double flow design (BB 81) used in many nuclear power plants.

As with most utility steam turbines, shaft vibration is continuously monitored on this unit with alarms and automatic trips at pre-set levels. In this instance, an inspection was triggered by an increased vibration in the LP-1 section of the turbine.

The LP-1 turbine section had been previously overhauled in 1997. About 6 months after that overhaul, the turbine could not be restarted due to high vibration following a short shutdown. Due to operational constraints, it was decided to trim balance the rotor until a more convenient opportunity arose to perform a detailed diagnosis and correct the problem.

At that time, a total of 10 lb of balance weight was added to the turbine to facilitate operation within normal vibration limits. While the unit operated for several years after the initial vibration problem was discovered and field-corrected, it was still known that the rotor had sustained serious damage. What was not known was the exact nature and extent of the damage. Without that information, it would be difficult for the operator to economically plan any repair work that would correct the problem.

If the unit’s casing were removed, for example, the operator would not know what spare parts would be required to make repairs. Typically, turbine blades over 12 inches in length are made from forgings requiring a manufacturing lead time of 12 to 16 weeks. This makes it economically unsound to open the casing for a planned 6 to 10 week overhaul without already having ready replacement blades. With an expected life for the blades of over 40 years, buying “insurance” or “warehouse” spares is not economical either.

In this case, the unit had operated for over four years after the initial incident without further indications of problems. The rationale for doing further inspection was not therefore a fear of further equipment failure or to determine a risk of failure, though that was a benefit as well. The main purpose of further inspection was to determine prior to opening the casing what repair work would be needed and to stock the necessary spares well in advance. From a business process point of view, the aim is to plan, schedule, man, and budget for pre-planned work and minimise the emergent work.

During a short outage in August 2002, a conventional videoscope was used in an attempt to find the source of the rotor imbalance. The inspection was performed from inside the condenser, inserting the videoscope through the bottom of the flow guide. The scope was inserted through the exhaust end of the LP-1 turbine starting with the L-0 buckets (blades) and was pushed through as many blade rows as possible. In the event, it was only possible to penetrate the unit to the L-1 rotating stage with the conventional scope.

In this situation, attempting to penetrate blade rows with this kind of tool is like ‘pushing a rope’. Since the tool has no axial stiffness, it is impossible to push forward when navigating the large changes in angle (90 degrees or more in some cases) from rotating to stationary blades. It was only possible to penetrate two blade rows into the unit, and no problems were found. The unit was put back into service and the utility continued to monitor.

During another planned outage, in May 2003, the improved tooling was used in a further attempt to find the source of the rotor imbalance. This brief outage came about four months prior to a planned overhaul. Thus, there was still time to use the results of the inspection, if successful, to plan repair work and procure any spare blading required.

Due to its stiffness in the axial direction, a bi-directional articulated tool (shown in Figure 3) was chosen that could steer into the mid-span stages of the turbine. The tool was able to navigate past 9-10 blade rows into the L-3 to L-4 stages. An illustration of the difference in reach of the two tools can be seen in Figure 4, which shows a cross section of the LP-1 turbine.

The key finding of the inspection was a missing shroud band segment on a rotating stage (also indicated in Figure 4).

Figure 5 shows a comparison of the missing shroud band with an intact shroud band. Figure 6 shows the break in the shroud band more clearly.

Due to this missing band, the other bands on the stage showed signs of buckling and damage (Figure 7). Surprisingly, damage to downstream nozzles (stationary blades) and buckets (moving blades) due to the loss of this material was minimal and in general the unit showed erosion at levels expected given its time in service (Figure 8).

The pictures from the remote inspection were “worth a thousand words” in making a convincing story to company management that a replacement L-3 blade row should be ordered from the manufacturer in advance of the overhaul. The advance inspection allowed the blades to be ordered with the “normal” lead-time, enabling the blade shop to manufacture them in the off-peak season and avoid overtime, at a lower price than emergency delivery. Thus replacement L-3 rotating blades were on hand at the start of the overhaul.

The casing was opened on schedule, in September of 2003. Having replacement L-3 blades on hand at the start of the overhaul probably reduced the duration by five weeks or more, achieving savings of millions of dollars in terms of electric power generation.

The second case study describes work performed at a Gulf Coast (US) petrochemical plant during a plant shutdown (what petrochemical company operators call a ‘turnaround’). The units inspected were a pair of Worthington steam turbines driving process compressors at an ethylene plant. Figure 9 shows a cross section of the turbine along with an indication of the areas inspected.

This pair of units had been operating problem-free for over 12 years. The plant, a single-train ethylene production facility, comes down for complete maintenance every 24-36 months. These turnarounds are the only opportunities to perform maintenance on the turbines, and only last about six weeks. Any extension of this turnaround due to, for example, a lack of proper spare parts or any emerging unplanned work results in hundreds of thousands of dollars of lost revenue per day. Therefore, thorough condition assessments are critical for planning purposes.

The primary purpose of these turbine inspections during this turnaround in the spring of 2003 was, therefore, to assess the condition of the units to plan for their maintenance during the next turnaround.

The first unit inspected was in reasonably good shape given its time in service (about 12 years). An erosion-resistant coating had been placed on the rotor in 1999 during its last overhaul, but this had completely vanished during the intervening service time. This unit also had continual fouling problems during its life resulting in lost performance. To regain this performance, the operator was performing monthly on-line water washes. Foster-Miller expected to find serious erosion due to this frequent washing, but on the first unit this was not the case. Figure 10 shows a typical picture of the blades in the forward section of the unit.

The low pressure stage of the second turbine was a very different story. Severe erosion was found on the inlet guide vanes of this section of the turbine. Figure 11 shows a representative view of the damage. This inspection finding required immediate review by the plant manager. After an afternoon of review and further inspection, it was decided to remove the casing of this unit to replace the first stage inlet guide vanes.

When the casing was removed, the severity of the erosion became all too clear (see Figure 12). But as luck would have it, the plant happened to have one set of spare inlet guide vanes for the unit. So the repair could be carried out within the turnaround, and extension of the outage was avoided.

In this case, the inspection of the two turbines ended up serving a dual purpose. First, as planned, the information from the inspection was used to plan for cost-effective and efficient future maintenance for one of the units. Second, as an unplanned benefit, the inspection revealed an emergent problem that could have resulted in a forced outage for the plant in the near future.

As these cases show, robotic manipulators can be used to perform inspections of large power plant components without costly and time consuming disassembly. More and more power plants, with tight outage schedules and very high penalties for running outages longer than scheduled, are using robotic inspection tooling to perform quick condition assessments during brief downtimes, and using this information to plan parts procurements and repairs, and lower the risk of failure.