With falling costs, a record number of jobs, major brands becoming new customers and enough infrastructure installed to supply 20 million US homes with electricity, it is official: US wind power is now a ubiquitous source of energy. Tom Kiernan, CEO of American Wind Energy Association, writes about the country’s use of alternative energy. 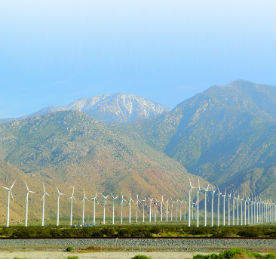 Coming off one of the most productive years in history, capped by passage in Congress of a long-term policy with bipartisan support, the future of the US wind energy industry is bright, with it set to quadruple by 2030, reliably powering 20% of the grid with clean, low-cost energy from thin air.

Thanks to innovation and US factories, wind power costs two thirds less than it did six years ago. That’s been the primary driver expanding the market for new investments. In many parts of the country, wind energy is now the cheapest source of new electric-generating capacity, even without incentives, as confirmed by Politifact, FactCheck and Wall Street investment firm Lazard.

“Wind is winning because we are focusing on the right metrics – dollars per megawatt-hour,” says Chris Brown, president of one of the largest manufacturers of wind turbine blades and nacelles in the US, Vestas Americas. “We have driven down clean energy costs with technology advancements: longer rotors, taller towers, advanced controls and product reliability.”

Wind is so cheap these days, which has made it the largest source of new electric-generating capacity – more than solar or natural gas.

Across the US, a rush of wind is under way. Over 10GW of new wind capacity is currently under construction, and there are now utility-scale projects in 40 states with plenty more to come.

Technological advances allow wind turbines to reach higher, stronger, more consistent winds, making projects more economical in a great number of places. For example, North Carolina will get its first wind farm this year, and the country’s first offshore wind project will begin along Rhode Island’s coast by the end of 2016.

Just a few years ago, the technology was not in place to make some of these projects financially successful. With Siemens and MidAmerican Energy to test a pilot project in Iowa this year, where they will construct the tallest wind turbine in the US using a concrete tower assembled in sections, the industry is offered a glimpse into what future technological progress will look like.

A trend that began in 2014, reached full maturity in 2015 and has continued this year is that the number of corporate and other non-utility buyers is growing. Some of the world’s largest companies, cities and universities are choosing to power their operations with wind.

Last year, 52% of the megawatts contracted through power purchase agreements in the US were signed by emerging buyers. It was the first time utilities didn’t represent the majority of agreements. Companies including Google, General Motors and IKEA purchased wind energy to power their data centres, factories and stores. Procter & Gamble procured enough to manufacture its homecare products in four factories.

While wind helps many of these companies and other emerging buyers meet internal sustainability goals, buyers are citing its low price and fixed cost of energy as the primary motivations for recent purchases.

“Because energy is a large operating expense at Google, it is beneficial to power the data centres with low-cost wind power,” says Gary Demasi, director of operations, energy and data-centre location strategy at Google.

Besides driving further demand, companies such as Amazon, Walmart and Microsoft also have the clout to advocate for policies that can help bring more wind energy about.

Brian Deese, a White House spokesman, says these developments will impact the future of clean energy in the US. He says: “When a large company sets certain goals, it can spur action across the supply chain through the adoption of clean energy and emissions reductions.”

US wind energy jobs grew by 20% in 2015. There is now a record of 88,000 positions supported by wind in all 50 states, and these tend to be well-paying jobs with benefits. That includes over 21,000 manufacturing jobs at more than 500 factories across 43 states.

Wind turbine technician is the fastest growing job in the US, according to the Bureau of Labor Statistics, and it is expected to increase by 108% in the next decade. The second-fastest growing position is occupational therapy assistant, expected to grow by 42%.

With Siemens and MidAmerican Energy to test a pilot project in Iowa this year, where they will construct the tallest wind turbine in the US using a concrete tower assembled in sections, the industry is offered a glimpse into what future technological progress looks like.

Travis Perko, chair of the wind technician department at Redstone College in Colorado, says: “A lot of students see that this is a job that’s not going away, they can make a decent living, they can provide for their families and so they are going to have security.”

With all this good news, it is important to keep in mind the challenges that still lie ahead. The US grid needs to be upgraded to handle 21st century needs, specifically by continuing to build the necessary transmission lines to transport wind energy from the best resources to the urban areas where low-cost electricity is most needed.

The Department of Energy took a big step in that direction earlier this year when it approved Clean Line Energy’s Plains and Eastern Line, which will transport clean wind power from the Oklahoma panhandle throughout the south-east. The project will generate more electricity than the output of four Hoover Dams, delivering affordable, reliable energy to millions of customers.

Figures show projects like these are good for everyone. The Southwest Power Pool – grid manager in 14 states – reports that transmission upgrades over the next 40 years will have net savings of $800 for each of its customers. The Midcontinent Independent System Operator – electrical grid operator for the Midwest – found similar improvements over the next several years could save each of its customers $1,000.

These cost declines, technological advancements and new sources of demand will keep US wind power on track to quadruple in 15 years. At that level, it would support 380,000 jobs. Up to 2050, wind could save US families and businesses $149 billion.

Those economic benefits are helping ensure real progress toward a better, cleaner tomorrow.