As construction continues on two new AP1000 reactors in Georgia and South Carolina, a nuclear feasibility study has ruled out the construction of a new nuclear plant 1000 miles northwest in Iowa, until at least the 2020s. 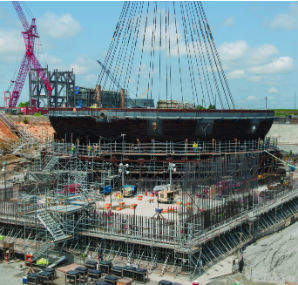 By early June, construction was underway on the containment structures for the Vogtle 3 and Summer 2 Westinghouse AP1000 reactors; they became the first new nuclear units to begin construction in the United States for three decades in March 2013.

The 900-ton containment vessel head bottom head was lifted into place on 22 May at the Summer site, and on 1 June at Vogtle. The component, which is around 40m wide and 12m tall was assembled on-site from pre-fabricated steel plates before being lifted into position on the cradle (or CR-10 module) using a heavy lift derrick.

Overall, construction on Vogtle 3 is "more than one third complete," according to an April report to the Georgia Public Service Commission. The project is owned by Georgia Power (45.7%), Oglethorpe Power (30%), the Municipal Electric Authority of Georgia (22.7%), and the municipal utility in Dalton, Georgia (1.6%), and is being built by Westinghouse and Chicago Bridge & Iron (which purchased Shaw in 2012).

Site preparation work for the Vogtle AP1000s began in mid-2009, and a combined construction and operating license was issued in February 2012. However, Georgia Power encountered problems that caused it to amend its licence and use a different concrete mix. First concrete followed in March 2013, once the problems were resolved, but the delays pushed the start up of the Vogtle 3&4 back around a year to the fourth quarters of 2017 and 2018, respectively. The estimated capital cost of construction has also been revised to $4.8 billion.

More recently, in May 2013 the US Nuclear Regulatory Commission approved another licence amendment that will allow contractors at the Vogtle site to use a different kind of steel reinforcement bar and concrete to pour walls in the nuclear island auxiliary building and inside the containment.

On site, work continues, in particular on the nuclear island foundation, containment vessel assembly, turbine building foundation, cooling tower foundation, raw water intake structure preparation, switchyard modifications and new transmission installation. The reactor vessel arrived on site on 15 April, and will be stored there until May 2015 when it is scheduled for installation in the containment.

Fabrication of the first containment ring has been completed, the second is almost finished and work has started on the final third ring. These three components are scheduled to be installed in November 2013, May 2014 and January 2015.

Meanwhile, at South Carolina Electric & Gas’s Virgil C Summer site delays to the delivery dates of sub-modules could put back the start-up Summer 2 by at least six months to late 2017/early 2018.

The receipt of sub-modules "has been problematic," Stephen A. Byrne, senior vice president SCANA Corporation, the parent company of SCE&G, said in an analysts’ briefing in early June.

The sub-modules are being manufactured by CB&I at its Lake Charles, Louisiana facility (formerly known as Shaw Modular Solutions), which was established to build sub-modules for AP1000 units. The sub-modules are then transported to the reactor construction sites, where they are built into modules weighing hundreds of tons.

Byrne said that work is currently underway on the CA-20 module (which will eventually contain the area used to house spent fuel). But he noted that it is the next module CA-01, which forms the refuelling canal, steam generator compartments and the pressurizer compartment, that is on the critical path.

"If the schedule they [CB&I] have given is one that they have confidence in [then] the preliminarily review shows our in-service dates for unit 2 are going to move from the currently approved March of 2017 to the fourth quarter of 2017 to the first quarter of 2018. So they’ve given us a bit of a range," Byrne said.

He also said that SCANA believes there is conservatism built into the sub-module delivery schedule. "We did receive the last couple of sub-modules from that facility early by at least a few weeks. So we think that demonstrates that they’re having the problems resolved. But from our perspective it’s not yet a trend, so we’re going to stay with the range until we find out something a little more indicative."

Still, start-up of Summer 2 to is going "to be well this side of September 2018," which is within the contingency allowance on the schedule given by the State Public Service Commission, Byrne said. He added that the delay could potentially cost $200 million over the course of the project, but said the figure is preliminary, and does not come from the consortium building the reactors.

Earlier this year SCE&G estimated its 55% share of the two-unit construction project costs at $5.766 billion. (The remaining 45% of the project is owned by Santee Cooper). Also, in May SCE&G asked the South Carolina Public Service Commission to approve a 2.97% increase in its retail rates to reflect costs associated with the two Westinghouse AP1000 units under construction. The utility said that paying financing costs while construction is ongoing lowers building costs by "about $1 billion," reducing the amount that its customers will pay.

In separate news, MidAmerican Energy has revealed that it delaying its decision to build a new power station in Iowa and is proposing to refund $8.8 million of the $14 million cost of a nuclear feasibility study to ratepayers.

The company, majority-owned by US tycoon Warren Buffett, said in June that it would be "premature" to pursue additional site work for any proposed generating option in Iowa, including a nuclear power plant. It blamed the "uncertainty of carbon regulation" and the lengthy regulatory reviews that need to be completed before small modular reactor designs can be built in the United States.

In an assessment, submitted to the Iowa Utilities Board on 3 June, MidAmerican concluded "there is not an apparent urgency" to proceed with regulatory applications for the deployment of a second nuclear reactor in the state. The conclusion is based on the results of the three-year nuclear feasibility study, which was carried out by Sargent & Lundy and NERA Economic Consulting.

The study said that over the "next several years" there could be more certainty on environmental regulations for fossil plants, as well as more clarity on SMR licensability and pricing; the latter of which it described as "a critical input" for decision making between potential generating options.

It found that SMRs have several ‘potential advantages’ for deployment in Iowa, compared to existing legacy designs developed in the 1960/70s, including improved safety, lower overnight construction and O&M costs; modular construction, and the ability to incrementally match load growth.

However, the consensus from the study is that SMR vendors are expecting to submit design licence applications to the NRC in the 2014/15 period, which means that certification of SMR designs may take "well into this decade" to complete.

Based on the results of the study (summarized below), MidAmerican has confirmed no land in Iowa will be purchased at this time to develop a nuclear generation facility, and it has committed to selling of some property it owns in the state, despite one site being potentially suitable for nuclear deployment.

The utility said that it will continue to assess all sources of generation in an effort to remain a low-cost energy provider. It has recently pledged to invest $1.9 billion in building up to 656 new wind turbines (or 1050 MW of new wind capacity) in Iowa by 2015, although it has not yet decided on potential locations or suppliers.

NERA developed eight specific energy market scenarios for its economic analysis. These included various combinations of high/low natural gas supply, economic growth and carbon pricing scenarios. The most probable scenario (likelihood 23%), envisaged a low natural gas supply, low economic growth (2.7% of GDP per year from 2012 through 2035) and no carbon pricing. NERA calculated the revenue requirements for each of the eight scenarios, assuming either a natural gas combined cycle or 2400 MW nuclear SMR deployment from 2020 through 2033.

Despite having higher up-front capital costs (around 73% of total revenue requirements) it was estimated that the nuclear option could cost $315 million a year less than a natural gas plant for the fifty-year period running 2030-2080 (see table). The difference in cost would be principally due to the lower fuel costs; between 75% and 82% of the total revenue requirements for a gas facility would be related to the delivered price of natural gas, the study estimated.

NERA also determined the break-even engineering, procurement and construction contract price for a nuclear SMR, based on various natural gas price projections. The EPC costs ranged from a low of just over $3000/kW to a high of almost $8000/kW and were projected to be around $4500/kW in the most probable scenario.

NERA noted that while SMR vendors have released EPC price estimates in the $4000 to $5000/kW range, no contracts have been awarded. It said that prices will be known with greater precision when the time comes to select a generating option. It also said that the short construction time for new natural gas units would allow MidAmerican "ample time" to deploy natural gas combined cycle units if SMR prices are found to be above the break-even contract price.

The study also found that delaying the decision on generating option to the end of 2014 could be "beneficial," due to the high up-front capital costs associated with nuclear generation.

MidAmerican said in its report "no conditions that would be expected to make the site in Muscatine County unlicensable or economically unfeasible were identified after an initial assessment."

The Fremont County site was not chosen due to a combination of factors. First, additional investigations found "significant economic risks" related to external flooding hazards at that site, which is close to the Fort Calhoun and Cooper nuclear stations. The study estimated that flood protection at the Fremont site could cost over $500 million (compared with $35-115 million for the alternative site). Second, due to the high groundwater table and alluvial soils at the site, it said that dewatering for deep foundations at the site would be "significantly more complex and expensive" than at the Muscatine County site. Finally, it was found that 185 miles of additional transmission line and a more complex infrastructure would be required for the Fremont site.

Despite its potential suitability for nuclear deployment, MidAmerican plans to sell of the land it owns in Muscatine County later this year. It said that further work, such as an early site permit application to the NRC, would take several years and cost up to $50 million.

The study (unsurprisingly) found that deployment of an SMR in Iowa could result in "considerably greater" economic development benefits than a gas facility.

An SMR could generate between $2.4 billion and $8.8 billion more economic development benefits than a gas facility through 2080, depending on the energy market scenario, it said.

For the most likely scenario (low natural gas supply, low economic growth and no carbon pricing) the gross state product was estimated to be around $5 billion higher for an SMR. In that scenario, the Iowa average annual employment was also estimated to be 7000 higher for
an SMR.

In terms of employment, during peak construction around 1880 temporary jobs could be created in Muscatine County, with the workforce receiving around $1.2 billion in total salaries over the 11-year construction period. About 800 employees would work on a 1500 MW operating SMR site, stimulating creation of around 1100 additional induced and indirect jobs in the region. Total employment income for the local region during the plant’s operating life, from all sources, is estimated at $134 million a year, according to the study.